Originally Published in This Issue (October 1970)
48 years ago! 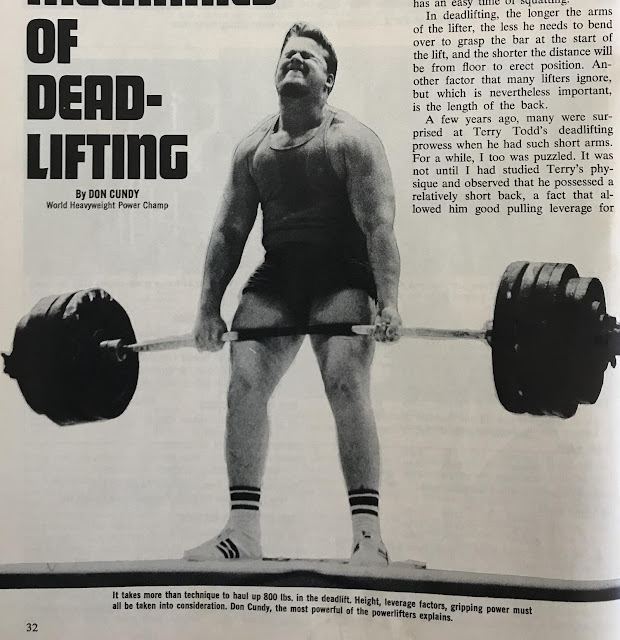 Most of the powerlifters I have talked with agree that the taller lifter has an advantage over the shorter man when it comes to deadlifting. However, ask them why this is the case and you will get various replies.

While I have to agree that taller men do seem to make out best at deadlifting, I feel the advantage stems not from the height alone but from certain other leverage factors usually associated with tall men.

It is accepted that short arms are an advantage for bench pressing and it is obvious the man with short legs has an easier time of squatting.

In deadlifting, the longer the arms of the lifter, the less he needs to bend over to grasp the bar at the start of the lift, and the shorter the distance will be from floor to erect position. Another factor that many lifters ignore, but which is nevertheless important, is the length of the back.

A few years ago, many were surprised at Terry Todd's deadlifting prowess when he had such short arms. For a while, I too was puzzled. It was not until I had studied Terry's physique and observed that he possessed a relatively short back, a fact that allowed him good pulling leverage for the last part of the deadlift when the bar has passed the knees and the legs are almost straight. That's when the back takes over most of the strain.

In my opinion, there are two basic deadlifting styles - the "hump-back" and the nearly straight-back. I employ the latter. While I oppose the first method because of the strain it puts on the spine, this style has helped many increase deadlift poundages. And this is especially true in the case of lifters with long backs. The "hump-back" affords better leverage by shortening the lifter's back. But there is also a big disadvantage. If the lifter does not keep his back straight at the start of the deadlift most of that starting thrust of the legs and hips will be absorbed by the rounding back and starting power is lost. This is why so many lifters who hump their backs at the start of the deadlift have such slow starts.

I have found that the best way to perform a successful deadlift with heavy poundages is to begin the lift with a relatively straight back so as to get maximum starting drive from the hips and legs. As the bar reaches knee height, it might help some lifters to round their backs slightly for better leverage.

It is a common mistake to straighten the legs at a more rapid rate than the back, thereby throwing the full strain of the lift on the back muscles. The back and leg muscles should work together for maximum pulling power in the deadlift. 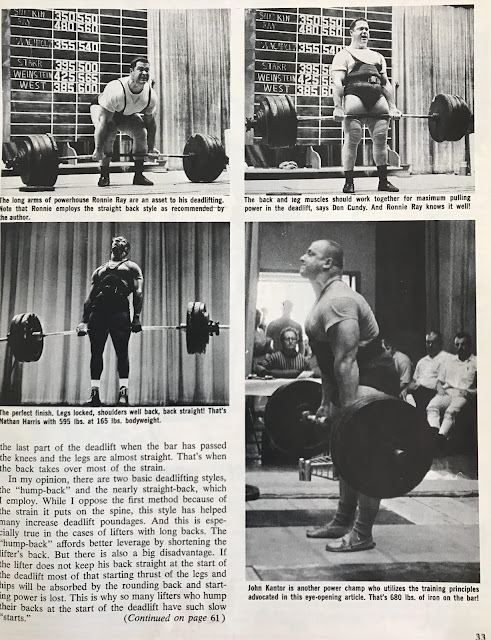 Since the short-armed person has the hardest time getting the weight started off the floor, and a relatively easy time once the bar reaches knee height, he requires a different kind of training from that employed by the tall lifter with long arms.

For the long-armed, long-backed lifter, exercises that bomb the upper back and trapezius will help prevent him losing the lift just as the bar reaches the above knee position. Partial deadlifts from two inches below the knee on a power rack, and high pull power cleans will work wonders. Since very heavy weights can be handled in the partial deadlift, the grip is also strengthened. Power cleans develop explosive power, keep the lower back strong and activate the traps violently.

There is no magic exercise or special wonder combination of sets and reps. That which works for one might not work for the next. The general training principles described here are important.

Probably the best advice anyone can give you to improve your lifting is to keep your eyes and ears open and learn about yourself.