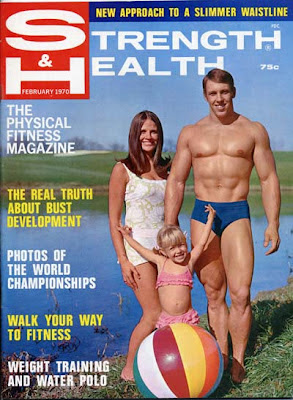 Originally Published in This Issue (February, 1970)

For the past  two months we've been outlining a program that's designed to soften you up and force weight gains. The procedure, in brief, is to ease up on your normal routine for about three months and do a few of the fattening things normally considered taboo. Actually, once you try it you'll like it. The fat cat life feels pretty good once in a while. And the change, strangely enough, will do you a world of good. It takes a little while to get over the guilty feeling of watching your old lady cut the lawn, but once you manage it you're home free.

Some people are inclined to look down their noses in contempt at the lazy man type of weight gaining program. These are the puritans of weight training, and quite often they're heaping scorn on something they haven't even tried. They're the critics who attach more importance to antiquated theory than to constructive suggestion; the pseudo-academics more interested in preconceived opinion than in visible results. If someone like this is influencing you they'll probably talk you out of even trying the program. But if you do your own thinking, and I suggest you should, then you might want to give it a whirl. And you'll be pleasantly surprised if you do.

Once you decide to give the routine an honest try, you can figure on a few nice things happening to you. You can plan on a tremendous surge in your energy supply, greatly increased training enthusiasm, a whole new outlook on living, and, most of all, a big boost in your body weight.

The principle of getting as lazy as possible for a short period of time isn't new. The idea of conserving your energy has been around for a long, long time. The old-timers, in fact, had a saying that became almost a cliche. "Never run when you can walk," they said. "Never walk when you can ride. Never stand when you can sit. Never sit when you can lie down."

Bodybuilding, at least in recent years, is a pretty positive thing. Most of the paths have been well explored and charted. Years ago bodybuilding failures ran high. More men failed, in fact, than succeeded. Guys beat their brain out for years and never got their arms past fifteen or their chests past forty. But today any trainee can make good progress. Everyone can't be Mr. America, of course, but everyone can build a strong, shapely, herculean body. And most of all, everyone can gain weight. There's no excuse for staying thin. If you're trying to gain weight and you're having trouble doing so, then you're doing something wrong and it's as simple as that. If your gains aren't coming, then you're making one or more of several clearly defined mistakes.

A lot depends, of course, on how much you want to accomplish. Almost any form of training will develop you a little bit, but if you want to gain a lot of weight, if you want to really bulk up, then you've got to dedicate yourself to that goal. You've got to channel all your energy into adding pound after pound of solid muscle to your body.

Gaining a lot of weight in a hurry is clearly a form of specialization. You must realize this. If you want to add twenty, thirty, or forty pounds of muscle, then you've got to put your mind to it. You've got to dedicate yourself. You've got to make a few sacrifices. You've got to conserve your energy and direct it towards a great and rapid increase in muscular bulk.

If you're dashing around and doing the million and one things that burn up energy then you're making a big mistake. Don't forget that gaining weight is specialization, and during the period of specialization you've got to restrict your outside activities. You can do anything you want to after you gain the weight, but while you're gaining it you've got to devote yourself to that one basic purpose.

My Uncle Harry is a good example. He put me on to the softening up thing in the first place. Uncle Harry packs around more shapely muscle than any man is really entitled to. He's got a lot of things going, like blonds, brunettes, and redheads, and he leads an incredibly active life, but when he decided to gain weight, he restricts everything else for that one purpose. He goes on bulk sprees from time to time, and when he does he gains weight like a herd of elephants.

I was over at Uncle Harry's apartment a while ago. I asked him about some of the changes he makes in his normal way of life when he's on a bulk kick.

Uncle Harry stretched and yawned. He had on an enormous sweat shirt with a big button pinned to the front of it. The button read, "J. Edgar Hoover Sleeps With A Nite-Lite." "Well," he said, "I sleep a lot more than usual. I get nine or ten hours per night and a nap in the afternoon or early evening."

"Sure," he said. "I just wallow around and take it real cool."

"I get real lazy," he said. "I don't play any other sports, or jog, or do anything that burns up energy. I save everything for gaining weight."

"Doesn't it get boring?" I asked him.

"No," he said. "Not really. In fact, it's kinda nice for a change. It might get boring after a while, but don't forget this is only a three month deal. After the three months are up I go back to my normal way of life."

"That must be nice for the girls," I said. "They'd be getting pretty lonely by then."

"Uncle Harry polished his nails on his sweat shirt. "They are," he said, "but I'm worth it."

Let's get on with the exercise routine. It's a three month deal, you'll remember, and the routine for the first month looked like this:

The squats are the most important exercise. They're to be done in puff and pant style with all the weight you can handle. Take about six deep breaths between each reps, and if you can walk properly afterwards you're not working hard enough.

The routine for the second month was a little longer, and looked like this:

The routine for the third month is different again:

The first exercise is the One Arm Military Press. This exercise can cause deltoid strains if you're not careful. Warm up well before you tackle it. Spend at least five minutes doing light presses, presses behind the neck, and lateral raises. Use very light weights for the warm-up. Just get your shoulders ready, don't wear them out.

When you've got your blood circulating well, do the one-arm presses. Maintain a very erect position. Don't sway over any more than five or ten degrees from the upright. You can hang onto a post or something with your free hand if you like. It'll help you to hold a strict military position.

Do the presses 5 sets of 12 with each arm. Alternate arms. Use a moderate weight for the first set, your heaviest weight for the second set and drop the poundage five pounds per set for each of the last three sets.

The second exercise is the Breathing Squat. Do 1 set of 20 reps with all the weight you can lift. If you've been working hard enough, this should be a pretty impressive poundage by now. TAKE THREE HUGE, GULPING BREATHS BETWEEN EACH REP AND LET IT ALL HANG OUT. As soon as you finish the last rep do 20 breathing pullovers with a real light weight.

You can have a five minute rest now, and you should need it badly. Some of you, I'm afraid, haven't grasped the concept of hard work on squats. You can figure as a rough rule of thumb that if you're not totally wiped out on the 20th rep then you're not working hard enough and you're not going to gain properly.

After you've rested up from the squats, you can go on with the rest of the program. The next exercise is the Hip Belt Squat, the same as in last month's program. Do 3 sets of 15. Hip belt squats, properly employed, will do more to bulk up and shape your thighs than any other single exercise. They don't have the overall growing effect that regular squats do, but for pure leg work they're unbeatable. Some of you seem to misunderstand the exercise, so we'll devote a little more space to it in another article.

The next exercise is the Stiff Legged Deadlift. Do them as in last month's routine -- 1 set of 20 as heavy as you can.

Start the dips with as much weight as you can handle tied around your waist. Cut the weight down each set and keep the reps up to 10. When you get down just your body weight you may have to drop the reps a bit. Do your best with it and keep working at it. The weight isn't too important in the curls. Use a moderate poundage and reduce it as you have to. The important thing is to get a good pump. You should be blown right up when you finish the final sets of the sequence.

That completes the program. Keep your supplement intake very, very high and follow the dietary suggestions from last month.

I'm running out of space. Give it all you've got -
surprise your friends and confound your enemies.