Before we get started on this, here's a book that's out today.

One of the more interesting letters I have received of late came from Anthony Ditillo. I have to think that every reader knows of Tony. He has written for Iron Man for many years, authored two very fine books on proper training, and has had some of his work appear in PL-USA this past year. I have long held that if nothing else, Mr. Ditillo is one very unique individual. His articles are always interesting and most often thought provoking. From his bulking routine to his infamous "Mr. Body Weight Control" article, he has endured over time and is today a very important contributor to the many publications.

Note: His articles appeared in PLUSA July, August, September, October 1979 and February, March, April, May of 1980.

I felt that my reply  to his letter, only because it covered such a wide variety of ares, was suitable for this month's column. My reply . . .

It was with much surprise and delight that I received your letter today. It isn't every day that someone of your knowledge writes. I have read your articles since you first started writing for Iron Man (what, 12 years ago?), and have always enjoyed your no-nonsense, load the bar approach.

I'll try to give reasonable answers to some of your inquiries. Perhaps it will also help a number of others with the same questions.

I think it's unfortunate that your business doesn't allow you to get to many (make that any) meets, as I'm sure that many fans would like to speak to you. Some may not care for your physique or emphasis on sheer power and mass, but it can't be denied: You're probably the best exponent and finest example of what you preach. Yeah, I know how it is to scramble for the buck and can appreciate what limitations it places on your involvement in the competitive arena.

Your experience with Bill Starr parallels almost everyone else's. I think that Bill, many years ago, paid for his belief that one should speak the truth regarding drugs and other ergogenic aids. As you found, he always took the time to give you straight answers and that has meant a lot to the game. remember that he was one of the first to reveal that the lifters actually took steroids! It opened up things, for better or for worse, but at least for equality for all lifters.

Your experiences, I feel are typical, regarding the bench press. Often, and I've done this myself in the past, one will do a number of "assistance" exercises to work the bench, but not bench at all during that period of time. More specifically, they will overhead press very, very heavy, and do some partial standing presses in the rack. They then get on a bench and find that their bench press has jumped 60 pounds or so, after a short time on the "other" work. "Hell, if my bench press goes up without benching, well, it should go berserk if I start doing them regularly." What they'll most often do is add a day or two of benching to the routine and

https://www.metacritic.com/movie/lo-and-behold-reveries-of-the-connected-world
Yes, lo and behold, their bench gets wasted. They wind up overworking the area, often get injured, and invariably degenerate (at least in terms of the bench press). The other approach is to drop the other pressing and just bench, also with less than expected results.

Your statement that the partial press (standing) in the rack is the best means for "developing muscle mass all over in the shoulder, trap, upper pec, and triceps areas" is valid (for most) and indicates that one doesn't have to bench much to bench well. I've previously stated that the best way to get your bench up was to bench, but not too often. I also stated the overhead pressing and full range dips were the way to go, especially for those who, because of injury or personal dislike for the bench would not or could not bench more than once a week, every two weeks, or even once a month. Your experiences confirm this. I'd just take it to the limit on the other work and hit the bench every now and then (say three weeks before a meet for a competitive powerlifter, just to see where you stand. This is similar to Starr's DL approach (lots of cleans, pulls, shrugs and good mornings but no DL.)

Your friend, Dezso Ban, is tough to argue with, regarding his belief that the secret, or key, to advanced training is a combination of "much work and hard work which will take many hours per week for long periods of time" is held by many, including the Bulgarians and hell, it's tough to argue with such a successful system, or at least I'm told it is.

But let's put this into a different perspective. For any program, or approach, to be considered successful, or result producing, it must produce certain minimal results for the average trainee and more accurately, the greater majority of the average trainees. The top men can do almost any, as long as they're working hard, and still beat everyone. A top bodybuilder, as well as Arthur Jones, recently stated that if the steroids were removed from the game of bodybuilding, the physiques might be less spectacular, but the winners would be the same. I have to agree with this. This is even truer in regards to the foreign athletes as they are handpicked and honed over many years, with little outside interference (things like going to work everyday, supporting a family). They are the cream of the crop.

To say that their particular training method was responsible for their success is not totally accurate. If you have noticed, and I'm sure you have, we've gone from the Polish system, to the Russian system, to the Bulgarian system. The common denominator is extremely hard work, harder than most men are willing to put out, at least in most gyms that I've been in. Time has little to do with it other than needing time for proper recuperation. The average man, meaning most men as our systems operate on the same physiological commandments, will respond better to very, very intense work, but common sense would dictate that this level of training could not be carried on very long, in terms of the individual workout, or the number or workouts over an extended period of time.

In watching and coaching many athletes, having taken part in some of the madness that went down in Lake Helen, Florida a number of years ago (for those who remember, I was the guy who fell off the ramp of the truck with the curl-triceps machine and had it land on me and then got up dazed but hysterically laughing, the result of four consecutive days without sleep) and priding myself on having an open mind if nothing else.

I honestly believe that working brutally hard (and it's tough to describe in words. You have to see it to understand it), not necessarily for "high reps" or using special machines, for brief periods (one hour to an hour and fifteen minutes should allow you to do all that is necessary over a limited period of time) before cutting back to a less severe level of training, will prove to be the most efficient, i.e., the most result producing method of training, for most trainees.

Again, some guys will grow on almost anything. I remember two incidents to illustrate this: Bill March had not lifted for a few months and decided on yet another comeback. 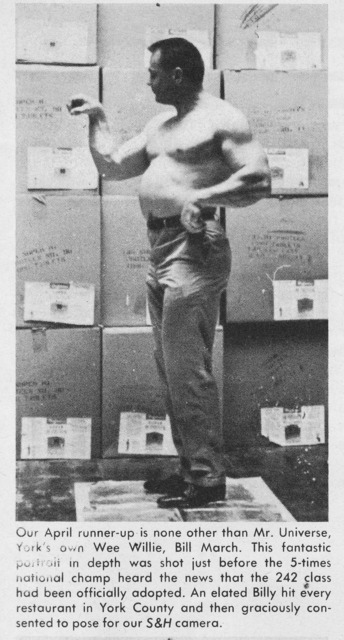 He got all ticked off because he couldn't press a world record only three weeks after beginning his routine. He responded that quickly and the method of his training really didn't matter. He could train "conventionally" or on his power rack and because he could and would train hard, and had lots of proper genetics, he grew. Casey Viator, a man that could, I feel, break any number of powerlifting records if he so desired, once leaned over to me during a workout and said,

"Hey Ken, you know what?"
He dropped his voice to a whisper and said, "I can hear myself growing."
And let me tell you, he probably could and would have no matter how he trained as long as he trained hard! And for these fortunates, who also happen to be our world and national champions, almost any amount of work will suffice.

Ask Fitton about the extent of Pengelly's routine. As I understand it, and if I'm mistaken then it's an honest mistake, he comes into the gym after a very arduous day as a roofer, loads the bar and squats his rear off, benches half the gym and walks out. A few days later, he'll wander in, covered with tar, load the platform bar, and do a few very, very heavy DLs. That's it. One, he's working very hard and heavy in terms of working near his momentary limit, and two, especially in light of having to work every day, as most of us mortals do, he gets lots of time for recuperation, perhaps the most important factor, after intensity of work, for the aspiring power champ.

As far as drug use is concerned, you've read my comments before. Most of the top guys use them in some form. Some don't or claim not to and I won't argue with anyone. It's a personal decision. Most guys who use injectables, use an oral agent concurrently and the doses vary widely. In regards to the individual you mentioned, your information is wrong. He used closer to 12 cc per week of depo. The oral dose you quoted is close, but perhaps on the light side. And no, additional bodyweight will not alter the physiological effect; steroid use will not initiate a fat burning mechanism in the body, not to the best of my knowledge.

Let's face it. The top guys have been at it for years and it takes years of consistent intensely hard workouts, staying injury free to maintain that consistency, and the proper parents (in terms of inheriting the genetic potential to make it) to get to the top and stay there.

Not much to add at this time. Stay in touch. Hope some of this stuff helps.