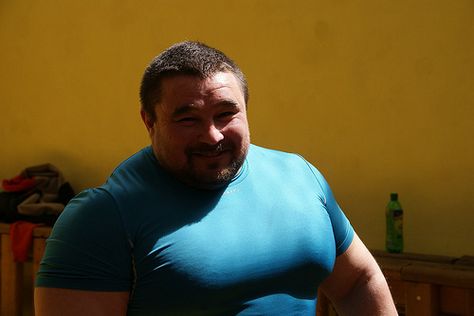 Steve Merjanian . . . a legend in the weight game . . . still capable of sets of 15 in the PBN with 225, and around a 330 single. He had a unique philosophy in developing overall pressing power, the main tenet of which was that you don't develop pressing power by just doing presses. He utilized scads of assistance exercises, concentrating on the lats and triceps, lots of bent rows. triceps presses, lat pulldowns, and lots of pulley work. These assistance exercises were done with a moderately heavy weight to promote a compete pump throughout the area being worked.

He would work one heavy day and one light day. On the heavy day he would do benches, and presses behind the neck, one after another, for a complete shoulder workout.

Another unique character of his training philosophy was plenty of dumbbell work. He once did a steep incline (80 degree) dumbbell press with a 225 lb. dumbbell in each hand. But that's nothing! He once saw Chuck Ahrens do the same feat with 250-pound bells. Chuck, along with Pat Casey, were Steve's idols from way back.

Steve's best, strict (one second pause at chest) incline was 440. He did that a couple of times and he managed a touch-and-go 500 once in that movement. Considering bodyweights, he was probably the greatest incliner of all time, although Casey might have something to say about that.

Another thing that Merjanian found to be true in his own experience: "Overtraining is in the mind." He felt that one could train for hours, heavy set after heavy set, the key being intensity. Control that and you control overtraining.

Both Merjanian and Mel Hennessy emphasized lots of assistance work, even for the legs (leg presses, leg extensions, leg curls), and they both developed extremely massive musculature to go along with their enormous strength. They looked even stronger than they were!