Softening Up for Weight Gains, Part One - John McCallum 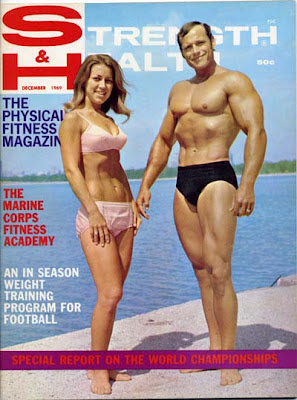 Originally Published in This Issue (December 1969)

Brandyside is four and a half miles of tawny sand fronting the blue Pacific. It's the best beach in the area. Every morning, sun worshippers by the thousand pour on to the hot sand and eat candy bars and picnic lunches and prostrate themselves before their god. And every night, man being the sloppy beast he is, the big machine from the city lumbers down the beach and scoops up the day's collection of wax paper, beer cans, Popsicle sticks and Hershey bar wrappers abandoned by the multitude in blithe defiance of the "No Littering" signs posted every five hundred feet.

I go down to the beach every chance I get. I like to lie around and practice my guitar. My friend Ollie comes along quite often and we sit on the sand and soak up the sun and argue about everything.


We were down at Brandyside about three months ago. I was hacking away at "Eleanor Rigby" and Ollie was staring through a set of 15X zoom binoculars at a dozen teenage girls in bikinis playing volleyball a hundred feet down the beach.

"Ollie," I said, "if your old lady comes down here and catches you ogling those bubblegummers she'll punch your head in."

Ollie snorted his indignation. "For a healthy interest in the game?" he said. "For a spartan appreciation of the fine points of sport?"

"I'm sure you appreciate the fine points," I said. "But I doubt they've got much to do with sport."

Ollie swung the glasses around and looked up the beach. He jerked and his mouth dropped open.

I turned and looked. About two hundred and fifty pounds of muscle in hippie sandals, curly black hair, bright red jogging shorts, dark glasses, and Buddhist prayer beads was swaggering up the beach with a reasonable facsimile of Raquel Welch on one hand and a monstrous ice cream cone in the other. Every woman for a straight mile down the beach was standing up.

I waited until they were almost up to us. "Hey, Uncle Harry," I yelled. "Careful where you kick that sand."

He walked over. The frames of his sunglasses were shaped like hearts and the glass had a reddish tinge.

"That's a pretty cool set of shades," I said.

"Nothing, really." He adjusted the glasses.

I looked him up and down. "Uncle Harry, you must have gained fifty pounds."

"Forty," he said. He shook his arm and the muscles rolled like truck tires.

"Sure." Uncle Harry grinned at the girl. "This is Bibsy."

Bibsy popped her gum and took a deep breath.

Ollie made a strangling noise.

"Gaining weight," he said. "I soften up and gain a lot of weight and then I trim it down for definition. I always end up looking a lot better."

Bibsy whispered in Uncle Harry's ear. He smiled and patter her shoulder. "Bibsy wants to know if I can hold your guitar a minute. She wants to take my picture with it."

I handed Uncle Harry the guitar, took the camera, and stepped back ten feet. He put the strap around his neck and hit the strings with a dramatic flourish.

"Take it easy, Uncle Harry," I said. "That ax is worth five hundred bucks."

Ollie leaned over. "Does your uncle play a guitar?"

"Are you kidding?" I said. "The old lecher can't even turn a radio on properly." I sighted through the view-finder. "O.K."

Uncle Harry placed a paw delicately on the strings, flexed his lats, and beamed at the camera. "Fess up," he said. "Do I or do I not look like half of Simon and Garfunkel?"

I stepped farther back. "You look like three-quarters o the Norman Luboff Choir," I said. Deflate a bit so I can get you all in."

I snapped the shutter and Bibsy squealed delightedly. There was a spatter of applause. I glanced over my shoulder. The girls had stopped playing volleyball and were looking at Uncle Harry. He bowed graciously and they gave him another little hand.

"Listen," I said, "tell me more about this softening up thing."

"There's nothing to it, really," Uncle Harry said. "I find if I boost my body weight way up once in a while, it pays off in the long run. When I train down, I look better than ever and I'm all hopped up on training again."

"What about the softening up part, though?" I asked him.

"Well," he said, "You know when you've been training for a long time you kinda get into a rut. The gains come slow and you get pretty bored with the whole deal."

"Yeah," he said. "Something like that. Anyway you need something to spark your interest and bring some big gains. That's why I do the softening up thing."

The volleyball players had wandered over for a closer look at Uncle Harry. They were bunched up about twenty feet away with their eyes bugging out. Bibsy moved in a little tighter.

Uncle Harry put his arms over his head and stretched slowly. There was a big murmur. I looked about. There were at least forty people, mostly women, standing in a big circle around us.

"Well," he said. "The first thing I do is get as lazy as possible. I stop all outside activity."

"Almost all outside activity," Uncle Harry said. "I quit swimming, jogging, sports, anything that burns up calories." He paused for a minute. "There's quite a bit to it," he said, "as well as the exercise part. Which do you want first?"

"The exercise part," I said.

Uncle Harry flexed an arm very casually and beamed at the crowd. The volleyballers gasped and moved in closer.

"It's a progressive thing," he said. "It takes three full months, and I use a different program each month."

I looked around again. We were attracting more people all the time. "Listen, Uncle Harry," I said. "Either put on some clothes or else talk faster, will you? If this mob gets any bigger, the cops'll come down and spray Mace on us."

Uncle Harry smiled at everybody. He's got teeth like a toothpaste ad. The volleyballers were within touching distance now and Bibsy was looking worried.

"The program's strictly for gaining weight," he said. "Softening up and gaining weight. It's usually good for at least twenty-five pounds." He took off his sunglasses and peered at me. "You might think the programs are odd, though."

"Well, the first month I only use four exercises," he said. "The whole workout only takes about fifteen minutes. It's really a lazy man's program."

"I start off with the seated press behind neck," he said. "I do three sets of twelve in very strict style. I use a moderate weight for the first set. Then I increase it twenty pounds for the second set, and finally drop it ten pounds for the third set.

"Now I take a little rest," he said, "and then I do the most important exercise in the program -- the breathing squat. I use all the weight I can handle for one set of thirty reps with about six deep breaths between each rep."

"Yes," he said. "It's a helluva lot of work, too. I'm absolutely gassed when I'm finish. I puff for five minutes afterwards. But it's essential. The program won't work without it."

"Then I do a set of light pullovers," he said. "For thirty reps."

"That's three exercises," I said. "What's the fourth one?"

"Stiff-legged deadlifts," he said. One set of twenty reps with all the weight I can lift. I do them standing on a block so I can lower the bar right down to my toes."

"It's not," he said. "But that's only for the first month and it's only part of the bag." He cleared his throat. "I'll give you the other parts of the program and tell you why the whole thing works."

Uncle Harry tensed a thigh and there was a big murmur from the crowd. I looked about. There was a solid wall of people around us, all gawking at Uncle Harry.

"Listen," I said. "I think I'll just take your word for it right now and you can give me the details some other time. "This crowd's getting ridiculous."

"Whatever you think," Uncle Harry said. He bounced his pecs and grinned at the commotion it caused. He took Bibsy's hand, pushed through the crowd, and sauntered away. The volleyball players watched him go. They whispered and giggled to each other till he was out of sight. Finally they went back to the game, but their hearts didn't seem in it anymore.