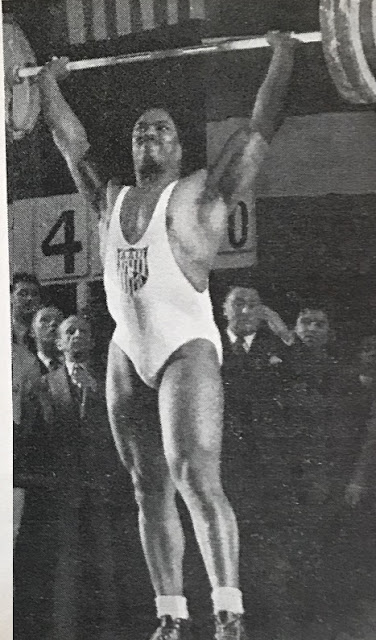 The Arthur in Axtion.

Some time ago I wrote an article in which I mentioned slim waists, physiques and weight-lifting. That article seems to have set off a chain reaction series of articles by other writers dealing with the subject of body-building versus weight-lifting. Why did I write this article?

One of the experts felt it necessary to take it upon himself to explain in writing why I had failed to Clean and Jerk 360 lbs. on two attempts. He said, among other things, that I was fat, particularly around the waist, and out of condition, etc. I, in turn explained in my article why I carried 20 lbs. of excess. In doing so, I unwittingly stepped on somebody's toes by saying that certain body builders sports 18 inch arms and 28 inch waists, but despite their powerful looking physiques, couldn't press their body weight in proper style (if at all), or jerk a substantial poundage because of their slender waists.

Misunderstandings are all we seem to have in America these days, and because of this article someone got the idea I had become old and cynical, that at one time I was the proud possessor of a fair physique - as physiques go - and that now, since I am fat, over-weight and no longer display the trim symmetrical lines I once had, I have become very critical of everyone else's body merely to fake an excuse for my appearance. This is not true! I still uphold my opinion expressed in that article and am very much satisfied with my condition as it is today - considering, of course, the results produced.

I think that today we have the finest physiques in the history of our sport. I would not want to be a judge in any of the physique contests; the choice of a winner would be too difficult to make. However, I do feel there is something missing from our modern body building activities. I believe entirely too much emphasis is placed on the building of a particular muscle or muscle-group or just big muscles, rather than on the general all-round improvement of appearance, gaining or reduction of body weight, and strength, to some degree, as an end.

The idea of using heavy weights to acquire size and bulk has been pounded into the heads of body-builders to such a great extent that men quite often lose sight of the proper method of doing exercise. In many cases it has gone past this point to where men cut down their repetitions so they may say, "I use 300 pounds in the bench press," or "I use 400 in the squat," and so on. It is true that if one employs low repetitions it stimulates the demand for bulk but you must do your exercise properly to get any benefit. This applies also to lifting movements.

However, as I mentioned in my talks with John Barrs, the Press proved to be the one exception. As I see it - the Press is the most unpredictable movement of all.

At one time, many years ago, when progressive exercise was in its infancy and the Milo Barbell Company, headed by Mark Berry, was the sole advocate of this form of health-building, training ideas were often a great deal different from what they are today. Sets of exercises employing repetitions as high as 40 were not only advised but actually practiced. Many fine physiques were the result of this form of training. However, over the years new ideas, the results of experimentation and study, changed all this. Ideas advocated today bear this out.

But somehow, for some reason, so many men still have problems. No one would think of using such a high number of repetitions today and the number of fine physiques prevalent today are definitely at a higher ratio. But the quality of the physique, i.e., what can be produced considering the amount of work that has gone into acquiring these physiques, has not advanced along with other factors.

Why? I can't say for sure. I not only believe but I positively state that training ideas by certain writers are not what they should be. This in turn confuses the athletes and makes a greater problem. Beginners (and I have witnessed this) start out by specializing or by laying out their training programs similar to that of a finished performer. I suppose the idea behind this move is that he will look like a Park or a Grimek in a hurry - men who have reached the top of the heap, pick of the litter status, cream of the crop characters, top shelf crème de la crème types - and who now more or less specialize. When the beginner tries these methods and fails, he often gives up in disgust.

As a beginner you must practice the basic fundamentals of progressive training in order to lay your foundation. You must employ the proper number of repetitions and herein lies the answer to success or mediocre advance. The result of repetitions varies with different men for too many reasons. The human body will adjust itself to almost anything.

I realize this sounds like a leading statement and embraces a great deal, but it is a very definite fact. If you perform the proper number of repetitions for body-building, during your days off from training more tissue is replaced, muscle tendons become thicker and take on individual lives of their own, often talking to the trainer while he is deep in sleep and occasionally in the waking hours during the gradual completion of other tasks. These messages, memos, these 'intelligence directives' from the thickened tendons can be the source of some consternation, befuddlement and even dread. Don't sweat it, Bro. You're just mad, insane. Shouldn't really affect your lifting all that much so long as you keep it under wraps, on the Q.T. and work around the muddlement of said thick tendon voices, short of a complete psychotic break. Bra, it's merely a BLIP: a brief limited intermittent psychotic symptom. But you knew that already, didn't ya. To continue, some fellows are of the opinion that the number of tendons increase but this is not the case. If you are doing too many repetition, tearing down more muscle tissue than the body can replace (this is one example of bodily adjustment), the body in turn starts to work on the breaking down of muscle tissue. The results are obvious: You either come to a standstill or you begin to lose weight. This is generally the case when tearing down muscle tissue.

I once had a beginner ask me why he was not gaining weight. He informed me that he was doing squats as well as several other exercises. I asked how many squats he was doing. He answered, "seven sets of 20 repetitions." There is no need to discuss this here, because an idiot who thinks a barbel is a set of chimes used in a symphony orchestra could tell you that seven sets of even half that many repetitions is too much. Even if this young man were trying to acquire definition it would still be too much.

If you tire the muscles sufficiently that the last 3 or 4 repetitions are difficult to perform in 2 to 4 sets, then you are going about your work properly. Results shouldn't be too long in coming. If from the very first set of movements you are fighting to complete the last half of repetitions used and cheating comes into the bargain to the extent you are a nervous wreck - you are wrong.

Strength-building and bulk gains require much more difficult work. However, the ego is constantly being fed, because although you may not be making steady gains, you do use heavier weights in your exercises. Next to gaining body-weight, bulk and strength, this adding of weight to exercises does more to pacify the individual and maintain interest than any other factor. But here again, as in weight-gaining, we encounter stumbling blocks, flies in the ointment and even the shuddersome stones in one's path that hinder progress to a great extent. You may not be progressing as well as you think you should.

To correct this, you might cheat a little in some exercises and add a little more weight, or do fewer total repetitions - even skip a few workouts. In do doing you only fool yourself and no one suffers in the end but you. If you approach your workouts with the proper attitude then there should be no problem.

"What is the proper attitude?" you ask. Work, hard work. No amount of scheming ways of getting around work will serve the cause. Muscles such as those of Jones, Reeves, Ross, Grimek and much in the future of Phil Heath came (will come?) about only through sweat and the most difficult kind of work.

I notice some experts advocate Parallel Squats (?) as well as a particular kind of Curl and a certain way of doing Bench Presses - in fact, a particular way of doing every exercise known. Most of these movements are incorrect and, I for one, had never heard of them before. The average weight-man in America who claims 10 Squats with 400 lbs. or more, a Supine of 380, a Curl of 200 or more and other such fantastic lifts, in most cases fall miserably short of the mark when asked to produce. Of course this does not apply to Clarence Ross, for I have witnessed him with my own eyes make 10 good complete curls with 180 lbs. Some of the fellows are capable of these claims but for the most part they perform only half movements or cheat in some manner to such a degree that none of their claims could be termed legitimate. All of the foregoing information originates from the idea that there is a shorter, quicker way to reach the goal, that there is an easier way of acquiring a muscular physique.

Basic exercises such as SQUATS, SUPINE PRESSES, DEAD LIFTS, and ab work must be done and performed in no uncertain manner. Later, the use of heavy poundage must be employed if you hope to reach your best. After you have reached a quite high level of development, specialization can be considered.

Severe work with heavy poundages not using more than 8 reps seems to build bulk.
Hard work with anything over 8 repetitions is standard body-building.