Power and How It's Achieved - Jim Williams 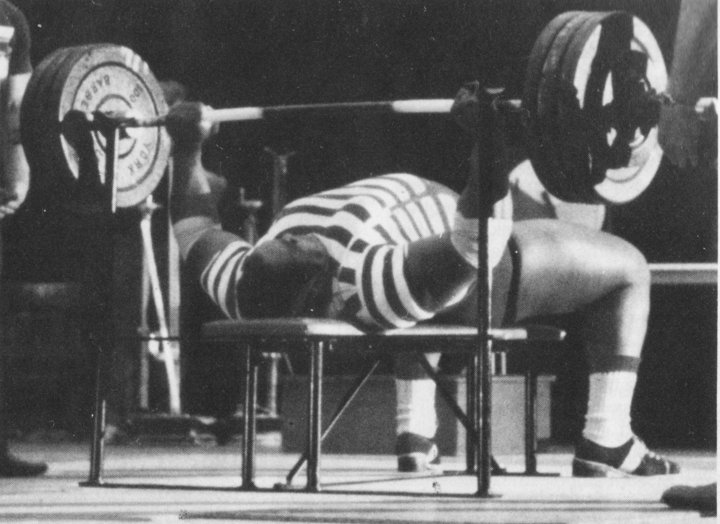 You may be interested in this book:
Search for jim williams benchpresschampion pdf

Power and How It's Achieved - Sam Diana

While talking to Big Jim about his mental attitude and approach, and his great well of power, I was amazed at his answers. I thought I'd share one of them with you. When we were talking about "pure raw power" with or without drugs, I said to Jim, "How does one get this power that you possess, and how are you able to bring it to the surface within seconds?"

His answer startles me to this very day! It was different from what I had ever expected. He said, Sam, you don't acquire this kind of power . . . YOU TAKE IT! You literally take it from yourself upon demand. It's just a total mental preparation. If I was to train any of the top bodybuilders in the country with the ideas I have conquered, they would be the easiest to train with this method.

Bodybuilders train for a maximum muscle control, minus the power of a top powerlifter. This is why Big Jim always tells lifters, especially those who are new to the game, to bodybuild first and learn the complete body. You see, if you know what muscles work with a certain movement, these would be the muscles to zero in on during that movement.

After you have gained all the strength you can get, the secret is to be able to control it to failure. Failure does not mean taking a great weight that you can't do and then failing with it. That would be simply absurd. Then what are its principles, and what does it mean? It means that you do not fail because of techniques or training, but you fail because you have reached the profound limit.

Of course, you have seen lifters (and you may be one of them), who in the past have taken extraordinary poundages beyond their limit, because of embarrassment or the need to win, and get injured, or completely fail, mainly because they were not ready for it, neither physically or mentally. This is definitely against all my principles and is not what I'm talking about here. I'm talking about a maximum prepared body and mental condition that knows no limits but failure.

Most people train for success, so therefore, if 500 lbs. is a person's goal on the bench, squat, or deadlift, etc., they will no doubt take lifts that will drive them to this 500 lb. goal and, if really pushed, maybe another 15 lbs! You will probably argue that it may be the person's limit; I fail to agree. It may be the limit, because of the way one trains, but it is not failure. Just because a person is stuck at a poundage for years it is not necessarily the case of one who has reached their limit. Limit and failure are almost the same, but there remains a gap between them. Limit is what you have allowed yourself to do. Failure is the boundary you reach through combined full physical mental output.

My training is much different and more difficult and knows no limits but failure, because I use my mental capacity to push my strength to failure. To calculate failure, I have to form a problem by using the number 7 in my formulas. For instance, if I bench 600 x 7, it will equal 4,200 lbs. in total reps against the poundage 600. One must also be aware of the fact that each additional rep brings on the increase of gravity's pull! By the time I reach the 6th and 7th rep the resistance factor is combined to 4,200 lbs. by my calculations. Some may be able to figure it out to be more or less; this I'm not going to argue with.

This formula can be applied to any set poundages of the medium-heavy range upwards, providing they are trained the way my book states. This formula will surely give you the point of total failure and not what you set up by under-training. The important thing about this formula is: you don't just hit a maximum lift that you have decided off the top of your head. This formula will bring you all the way past a supposed mas until failure. But this failure is the total you have trained for, and with what you now know you can command this power for the lift, knowing the point of failure. How many times in the past have you been asked, "What is your max?" and you either lied out of embarrassment, or didn't know. With my formula of training, the medium heavy rep to the number 7, you will know to the point of failure by the way you train those last six weeks.

Got it? The problem sometimes with understanding the thoughts of a person who has delved deeper than I have into any specific subject is the breakdown of language. What the man in the deeper-than-mine area says may be interpreted as something completely different by the less experienced reader. Or, it may seem to make little if any sense to that same less experienced reader. Okay then.

This is not my only formula or routine. You will find listed in this book several others that will prepare you for such advanced formulas.

What are the advantage of my formulas in relation to many others? In my way there is a very distinct advantage. In today's race for championship crowns, it is no small secret about muscle tissue becoming brittle through the use of drugs. Proven or unproven, drugs have received the blame.

Note: Ben Johnson's Olympic race in Seoul was 30 years ago today.
Don't connect the following links with the Jim Williams material, but
some interesting facts about Johnson's test have been made public recently:

Carrying on with Jim Williams . . .

I'd like to clear all of this up right now and in this book. Drugs get the blame because of the fact that many many many people get very strong in such a short period of time through drugs but are still unaware of the fact that, to begin with, they didn't train enough and now with the fast growth, they even train less. Astonishing, but very true.

My formula defeats this attitude that steroids falsely give to many lifters. The real problem is that most steroid uses spend the least amount of their training time on the medium heavy reps. They are so pleased with size gains and that in the arms, and the weights that they can now use, that this positive thinking gets them in and out of the gym without paying attention to those medium heavy reps. Just what am I talking about?

First off, with this happening, the muscles are growing at a rapid rate through the use of drugs, bigger and bigger, but the tendons holding the muscles are neglected through the lack of those medium heavy reps. What happens at this point is anticlimactic! When the muscle if forced to work with a heavy effort, it actually pulls itself loose from the weak tendon, or tears. Quads, pecs and biceps are the major muscles hit by this neglect. My formula trains you to train your muscles accordingly, with the medium heavy approach. We will talk about this subject further on in this book."

Without a doubt, Jim's way of thinking will prepare you to max to failure, with the positive assurance that you have trained those tendons too. Jim said that, when he is through training you, you will have achieved the impossible without injury; much less failures.