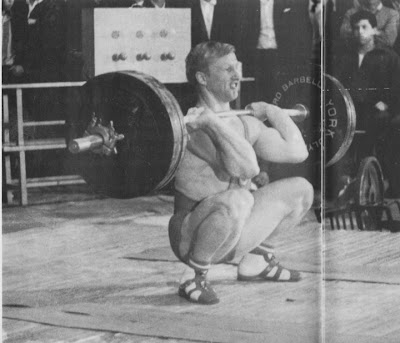 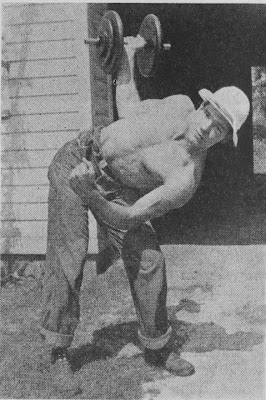 
Speed can be improved to a far lesser degree than strength, and usually does not exceed 30-60% of the beginning effort. The untrained run 100 meters in 15-17 seconds. After lengthy and prolonged training, this time can be cut down to 10-12 seconds. Only in the rarest of circumstances can this increase approach 100%.

For weightlifters speed is just as important as strength. The biomechanical processes which occur in the muscles during speed and strength training have much in common. The speed exercises have therefore a positive influence on strength, and conversely the strength exercises affect the speed positively.

Speed is increasable only by exercises done at a very rapid rate of speed. Suitable exercises having a positive effect on speed include:

1. Sprints of 20-50 yards.
2. Broad jumps and high jumps with and without runs.
3. Throwing of all types, javelin, volleyball, etc.
4. Imitation of championship lifting.
5. Lifts with a stick, iron bar or light weights.
6. Snatches with a light bar, straight up.
7. Swimming sprints of 20-50 yards.

For speed training the number of repetitions is very important. If it becomes apparent that the body is becoming fatigued and the movement is becoming slow, it is best to stop. Only those movements that are performed with maximum speed bring a visible result. Therefore it is best to perform these movements before your weightlifting program. As soon as the symptoms of fatigue set in, no more benefit can be derived from the speed movements. One can perform speed movements fairly often, not less than 3 or 4 times a week.

The special conditioning is gained by work with the barbell. One increases the number of lifts during each training day. The chief method in which the weightlifters moderate conditioning is by increasing the number of sets each training session. As we already know strength grows the most through training with heavy weights, weights the lifter is not capable of handling more than two or three times. If one wants to increase ENDURANCE, then the weights handled should not exceed 60-70% of maximum. This type of training will do little else besides increasing endurance, if practiced by experienced lifters. The increase in strength with such a program is very limited.

However, this type of training has real value in increasing the ability of the lifter to absorb the punishment of strenuous training routines. One can increase his condition through regular training 20-30 times more than his strength and speed.

Master lifters like Medvedev and Plukfelder lift 10-15 tons over a 3-3½ hour training session. They do not feel particularly tired after such training. Vlasov lifts up to 20 tons on a training day and is still ready to go the next day. it is clear that only very good and thoroughly trained lifters can endure and benefit from such tremendous workloads. For beginners, 1-3 tons per training day is sufficient. However, even this may be too much. Only gradually, as the functions of the various systems of the body adapt and improve, can the lifter endure a significantly higher training load without exhausting himself.

Without good mobility in the joints, a powerful and speedy functioning of muscles is not possible. If the movement capacity is good, then he muscle is able to perform with full efficiency.

The research of Professor A. V. Korobkov shows that most of the champion athletes have excellent flexibility in the joints. Men like Vlasov, Kurinov and others have an extraordinary flexibility and suppleness of movement. Flexibility is especially important for weightlifters because not only is it vital for the performance of the sport but a training session has a tendency to decrease movement and flexibility in the limbs. The limbs and especially the spine are compressed by the burden of the weight.

Flexibility exercises should not only be included in the beginning and ending of every workout, but also as a preventative measure during a workout after heavy pressing or jerking. After these lifts, we recommend touching the floor with the fingers while keeping the knees straight.

It is also suggested that after heavy pressing, jerking or squatting, hang from an overhead ladder or horizontal bar. It is also true that lifters who have a hard time straightening their arms (lacking elbow flexibility) find holding jerks at arms’ length a difficult task. This is still more difficult if the shoulders are tight and inflexible. In order to improve the flexibility of the elbows and shoulder, the following exercises should be practiced every day:

1. Place the upper forearms on a support (table, ironing board, etc.) while the forearms hang free. In the hands hold dumbells or a pair of light plates. With gradual movements move the upper body up and down, back and forth, so that the elbow attachments are stretched.

2. Raise a stick over the head with straight arms and then bring it behind the neck and down the back. Both of these exercises are effective if light weights are used.


Developing flexibility requires constant practice. One should always include suitable flexibility exercises before, during and after training. This will develop a full range of motion. For instance, rotations of the upper body should be performed to the side, the front, the back, etc. in order to develop this flexibility in all areas. In addition to the flexibility exercises practiced in training one should do some flexibility work at home. In all movements, strive to gently go a little further each time and increase the range of movement.

Speed and flexibility are of vital importance to the weightlifter. Neglecting them can only lessen the chances of success.