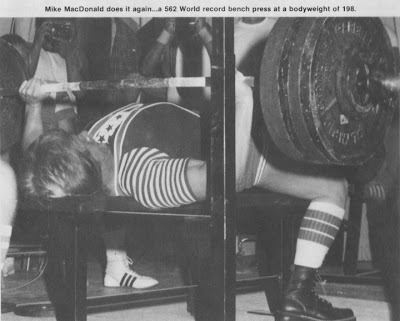 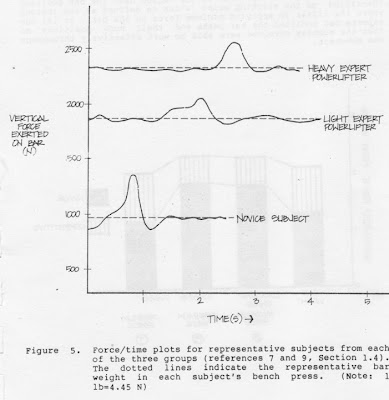 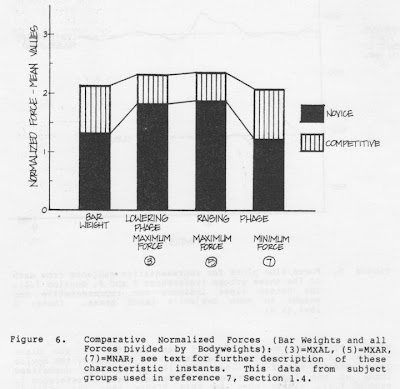 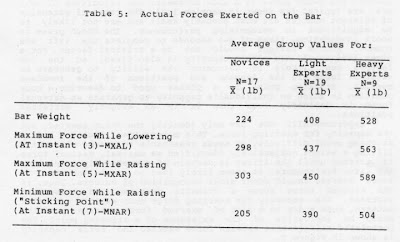 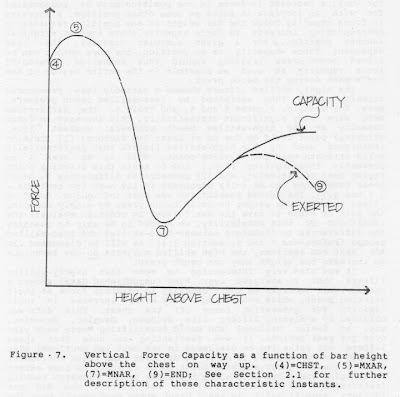 Forces Exerted on the Bar in the Bench Press

Several major points will be emphasized in this section that are of great importance in bench pressing:

It should be initially mentioned that it is from the biomechanical studies contrasting the bench pressing techniques of experts versus novices (references 7 and 9, section 1.4) that this section is based. The vertical forces exerted on the bar during bench presses are all that will be discussed. The horizontal forces applied to the bar are ignored since they can be considered negligible (based on the low horizontal accelerations obtained in those studies). Additionally, forces applied by the lifter along the bar are also not cited since these are indeterminate (although experimental) measurement approaches for determining these forces are underway.

Figure 5 presents actual vertical force/time plots for representative subjects from each of the three groups from the two major studies (references 7 and 8, section 1.4). As would be expected, the forces exerted by the three groups were different – the experts were able to exert larger forces. Some, if not all, of this increased force capacity is probably associated with increased muscular capacity. However, it is interesting to note that the vertical forces exerted by the expert groups (see figure 5) are more uniform than that exerted by the novice group. Despite the fact that the experts were handling larger weights, their average difference in maximum and minimum force exerted on the bar was significantly smaller, as shown in Figure 5. In other words, the differences in force exerted between the experts and novices were much more pronounced at their positions of minimum force exertion. This can probably be seen even more dramatically in Figure 6 than even in Figure 5. Note in Figure 6 that the top of the black section is the average normalized force exerted by the novice group, and the top of the lined box is the average normalized force of the light expert group (from data used in reference 7, section 1.4). Please note that in this Figure that the greatest differences between these two groups are seen for Bar weight, and more importantly, at the instant of Minimum Force during the raising phase. The reasons that the experts were able to exert more force at their “weakest” (minimum force) point than the novices may be due to a number of factors: (1) perhaps the novices were not able to predict the maximum weight they could lift as accurately as the experts and thus were not required to exert as large a force (relative to their capacity at this instant of minimum force exertion); (2) maybe the experts have benefitted from training effects specific to the region near the bar position identified as the sticking point (which is often defined as the instant where the lifter is applying minimum force to the bar); or (3) the experts had modified the bar paths and their body positions so that the muscles involved were able to work effectively through the movement.

Notice that if you look at the “curves” of normalized Force in Figure 6 (that are made visible by the lines drawn between the mean value blocks), you can see that the experts’ average force pattern is much smoother than the novices. Such a smoother pattern permits a larger weight to be lifted without an increase in the peak force used. If both groups in Figure 6 are exerting maximum force at least until the sticking point (remember this is the point of minimum force exerted on the bar, instant (7)) is passed and the techniques of the groups are equal, then the decreases in force near the sticking point should be similar in nature. But you can see that this is not the case! The difference in maximum and minimum normalized force is only 14% for the competitive group versus 44% for the novice group. The high skilled group was thus capable of exerting 87% more force at the sticking point than the novices!

Any bench presser knows that the “sticking point” is a real (and frustrating) phenomenon, especially in meets. It often seems that there is indeed a sticking point associated with the bench press. The experimental results of all our studies so far verify the existence of a sticking point in the bench press. All subjects exhibit a distinct minimum in vertical acceleration while raising the bar. Newton’s laws indicate that this instant of minimum vertical acceleration is also the instant at which the lifter is exerting minimum force on the bar (instant 7) in Figure 1 and all subsequent Figures). For this reason, the position of the bar at this instant will be referred to as the sticking point. The acceleration histories of all 48 subjects in our studies (references 7 and 9, section 1.4) exhibit the dip associated with the existence of a sticking point. There thus exists a bar and body position for which the lifter is significantly weaker than he is at other positions. This holds true for all bench presses studied.

Let’s look at what’s involved. The effectiveness of our musculoskeletal system in generating an external force depends upon the system configuration. Generation of an external force requires the production of internal moments at various joints. The ability of a muscle to produce a moment at a joint depends upon many factors, including the muscle capacity, the muscle length, the rate of extension of the muscle, the position of the muscle relative to the joint and the recent history (fatigue) of the muscle. (Force Moment; Moment Of Force - A force that produces a twisting or rotary movement in any plane about an axis of motion; it is the rotary effect of an eccentric force. Torque occurs when bones move around each other at joints which serve as the axes of movement. Thus, a muscle force when applied over a range of motion is measured as torque.)

For a given individual the factors most significantly affecting performance in the bench press are geometrical in nature. The bench press is a slow movement, bar velocities of 0.4 m/s (meters per second, 1 m/s = 3.28 feet per second app.) are typical (as shown in section 1.2). The rates of extension of relevant muscles are most probably small and are not unlikely to be significant in determining performance. The bench press is short in duration, times of 3-5 seconds to complete the lift are common. Muscle fatigue should not be a critical factor. For a given individual, his muscle capacity is also fixed, so the two factors most likely to determine the ability to generate an external force are the lengths and positions of the involved muscles. Sticking point is a phrase used to describe a body position in which an individual’s capacity to generate an external force is decidedly less than it is at slightly different positions.

Experimentally one can only identify the force exerted, not the capacity for exerting force. This makes identification of a sticking point difficult. It seems reasonable to assume that while lifting a weight subjectively identified as maximal, maximal force is exerted until the lifter certain of successfully completing the lift. Furthermore, it seems likely that no great increase in force exerted should occur after recognition of success. Thus, if the exerted force shows a dramatic decrease and subsequent increase, the capacity for exerting force must exhibit a similar pattern. Such a dip in a plot of exerted force versus position would be indicative of the existence of a sticking point. The postulated relationship between the force exerted and force capacity is shown in Figure 7.

The point of particular significance in Figure 7 is the point where the force capability is smallest (instant (7)). This is the location of the sticking point. The existence of the sticking point, indeed the variation of force capability with height, is essentially a geometric phenomena. Given a particular level of muscular development, it is the mechanical advantage that can be gained at various positions that determines the force one is capable of generating at those positions. The mechanical advantage is determined by factors such as muscle lengths and lines of action. Those lengths and lines of action are determined by the position of the lifter, in particular by the position of the lifter’s arms.