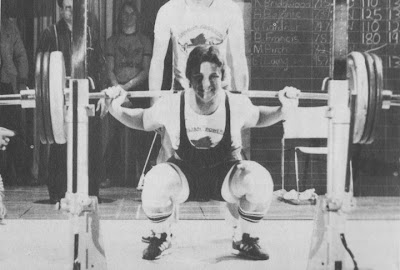 
I have always considered myself to be somewhat of a “natural” deadlifter. However, when I got into serious Olympic lifting in 1975, I began doing some exercises which I feel had a very strong positive effect on my deadlifting ability.

Of course, I had always done power cleans, but my deadlift training per se was very infrequent. Nevertheless, when my ability in the power clean reached 385, I found I could deadlift over 700 without a great deal of specialized training on the lift itself.

Before the World’s Strongest Man competition in 1978, I worked particularly hard on the deadlift in order to get my back strength up for the various demanding events in this contest. And this extra effort paid off, as only Don Reinhoudt – a specialist on the deadlift, having done nearly 900 pounds – surpassed me by just five pounds in the car lift, which is a similar test of back strength.

Here is the routine I came up with and followed in preparation for this contest. The poundage and reps given indicate my maximum output.

On the following Tuesday I would do a couple of triples in the snatch with 286 and then some snatch grip hi-pulls with 330 for triples, plus some light good mornings – three sets or 10 reps with 198 pounds. Then on Thursday, I’d go for a maximum deadlift.

I was able to cycle this routine three or four times and found that it gave me tremendous strength.

I know that there are many lifters who feel that it’s crazy to do power cleans, power snatches and other Olympic lifting assistance exercises to improve the deadlift, but they do work. Some caution should be observed, though, when doing good mornings, as the bar should be comfortably set on the shoulders, the knees bend, and the head kept up throughout the movement.

Squatting also has a strong influence on one’s success in the deadlift. The leg strength derived from this exercise really helps when moving the weight off the floor.