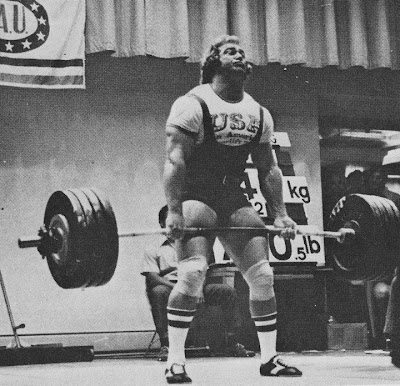 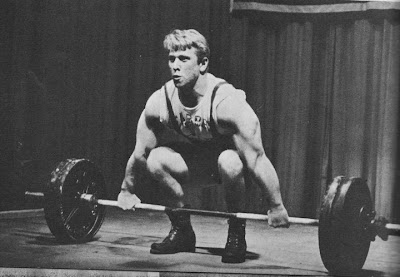 
What is the difference between today’s training methods and the training of men like Bob Peoples, who lifted 728 at 181 pounds, or Louis Cyr, who made a one-finger lift with 528 pounds? Take a look at the statue of Sandow in the York Weightlifting Hall of fame . . . look at his back development! What bodybuilder can match the spinal erector and oblique development Sandow had? Read the records of Sandow, Hackenschmidt and Travis. Why can’t anyone match their back and supportive power?

There was no magical training system or diet in those days. They trained on cumbersome barbells and dumbells with no revolving sleeves and two inch handles, and performed odd strength stunts. They did one-arm lifts, snatches, cleans and deadlifts, back lifts and many indirect back exercises, but seldom the deadlift per se. Many of today’s powerlifters try to increase their deadlift by just deadlifting.

What this is all leading to is a little different deadlifting routine, one of developing muscle and strength through assistance exercises. Lifters in the 30’s and 40’s were capable of deadlifting good poundages but very rarely worked on the lift.

They got their strength through snatching and cleaning along with their regular bodybuilding exercises. Today, several of the Olympic lifters can deadlift exceptional weights: Ernie Peterson and Mark Cameron recently had an impromptu deadlift contest after a workout and both made 650.

Designed on these ideas, this article will deal with a slightly different system of training for the deadlift. Many different exercises should be employed for maximum strength and development, and whereas many powerlifters work in sets of five and fewer repetitions, this type of program will call for high reps.

The reason for the higher reps is that research done by Dr. Peter Karpovich and others determined that strength is best obtained by way of 6-8 sets of 5-8 reps. The muscles are best developed through even higher repetitions. Try some of these exercises for development of the deadlifting muscles.

1.) Snatches and Cleans – These Olympic lifts take a great deal of work on technique that most powerlifters would not want to do. You could try power-snatching and power-cleaning. Recent research shows that high velocity lifting reaches more muscle fibers than a slow lift. Do five repetitions and feel the workout your legs, back and grip get.

2.) Jefferson Lifts – This is one of those old favorites which lost its popularity over time. It can be used to hoist huge poundages, approaching the weight you can deadlift. Straddle the bar with your left foot parallel with the bar and your right foot at a 90-degree angle with the left. Take hold of the bar with your left arm forward and your right arm back, look over the left shoulder and while keeping the back as straight as possible lift the bar. After a set, switch the positions of the hands and feet and repeat the same number of repetitions. This exercise puts more strain on the legs than the back and is a good way to increase the pull from the floor.

3.) Stiff-Legged Deadlifts – These put more stress on the lower back than the regular bent-legged deadlift and they are good for working the involved muscles without putting a strain on the ligaments and joints. Since this is a remedial or developmental exercise it is best to do high repetitions. To really pump the back do from 12 to 15 reps. If done without straps your grip will get a real workout as well. Stand on a few plates or on the corner of the platform to get a good stretch and work these deadlifting muscles from a different angle.

4.) Goodmornings – These are very important to the powerlifter as the squat as performed today is more of a good morning than a strict squat. There are different ways of performing the goodmorning depending on the amount of knee bend that is employed and the depth the upper body is lowered to. If the stiff-legged variety is used, it is best done fairly slowly and with good control. Slightly bending the knees will put more stress on the gluteus (but) more weight can be used. This method is probably better because of the decreased strain on the vertebrae. Bending the knees even and going down to a position similar to the squat, but with much more lean forward puts even more stress on the gluteus. Very heavy weights can be used. Lower reps, six to eight, can be used with this exercise. Goodmornings should be used as a strength developer rather than a test of strength.

5.) Hyperextensions – This is another good remedial exercise which almost completely isolates the lower back. You can use these as a warmup or a strength-building exercise. Place a plate behind your head until you are strong enough to handle a bar behind the neck. High reps are used for this exercise and overarching at the top should be avoided.


Besides lower-back work the powerlifter must develop the other muscles in his back, the trapezius and latissimus especially. The lats and traps are strongly used during the lift. Bentover rows are good for both these muscles. All the different ways of chinning strongly influence the lats. Shrugs, cleans and snatches work the traps thoroughly.

No matter how powerful your back is you can’t complete a lift unless you can hang on to the bar. Vince Anello told Dick Smith during the National Powerlifting Championships held in York that while watching TV or reading he constantly works on his grip. Hand grippers or squeezing a rubber ball can be used for this. Another way is to pick up a heavy bar and hold it for as long as you can, without hook grip or straps. Regular forearm exercises, such as wrist curls and wrist extensions can he helpful as well.


The deadlift, if performed too frequently, will wear out a lot of nervous energy. Utilizing the exercises mentioned in this article will help develop strength without fatiguing the nervous system as much.

It is not necessary to frequently go heavy in the deadlift. Some lifters do it as infrequently as once a month, with a few of the oldtimers doing it only in competition. You’d be surprised how much you continue to improve if you deadlift only once every two weeks.

Why not try this type of program for a while and rather than go for limits on the regular deadlift try variations which can be a fun and interesting test of strength. One-arm snatches or deadlifts can be a good way to test strength without overtaxing the nervous system.