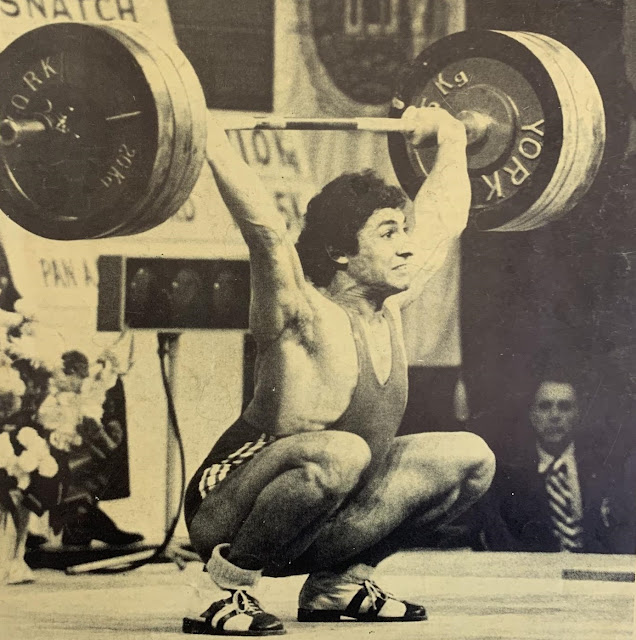 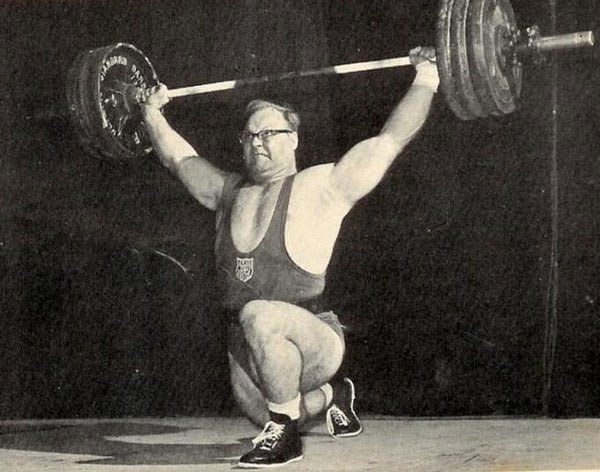 The Two Hands Snatch is probably the most important lift in this whole series, from every angle.

To perform it correctly gives the satisfaction that comes from doing something that calls for perfect coordination and poetry of motion. A ballet dancer performing an intricate movement, a diver from the high board, a gymnast in a complicated routine, all get this same feeling of rhythm both physically and mentally.

This lift also, in my opinion, is one that gives the body a complete workout in itself. It is actually a schedule on its own, probably no other movement in physical culture exercises the whole of the body and calls for the same coordination, power and style as does the Two Hands Snatch.

From a spectator's point of view it does what we are always attempting to do. It dispels forever the idea that weightlifters are slow and muscle-bound. It is truly an athletic experience.

Britishers have always been comparatively proficient on this lift. It is the only one of the three Olympics that one of our own has held a world record on. Ron Walker held the heavyweight record for some years with 297 pounds, and in 1948 Julian Creus held the bantamweight record for a short spell. To me it has always been a "natural" lift. Even in pre-war days I held the middleweight record with 215.75 when my Press was around 185 and my Clean & Jerk never exceeded 275.

I have held records on this lift doing either the squat or split style and am convinced that if I had practiced the squat style continuously I would have broken Shaw's record as a lightweight some time ago.

It has always been my opinion that the squat is a "natural" movement. It does not suit everyone, in fact I go so far as to say that only a minor percentage of lifters can employ this style satisfactorily, but it is an established fact that it has more and greater potentialities than has the fore and aft (split) style, and greater poundages can be elevated. Admittedly it is not quite as safe unless the style has been absolutely perfected.

I have often been asked why I changed over, because originally I commenced doing the say (it was on this style I broke the record in 1939) and the truth is, that being able to do both I like a change, and, more importantly still, even thought the squat holds greater possibilities for me, I prefer the fore and aft because of the actual nature of the movement! In my opinion it is not only nicer to execute, and when lifting for pleasure, surely the way that gives the most pleasure is the best way.

For the beginner I can only advise that he spends considerable time, in the very first instance, on style. Forget poundages, forget repetition work, and concentrate on STYLE at this point.

Try the squat, try variations of the fore and aft with experiments, and later on you will find it has paid a big dividend. Once you become "set" in any particular technique it is hard to change. Surely it is best to develop one style, the one you find most suitable, the one you like, and then persevere on those lines.

More important still, and this is commonsense born of experience -- if you develop a certain technique to the point where it is automatic then you can concentrate your mental and physical energies into actual pulling and not have any diversions.

It is useless to imagine that it helps to lift a heavy weight by thinking throughout the movement, "head up," "chest out," "split," at the appropriate times. This is simply nonsense. All these things should have been thought out beforehand -- long beforehand. When you grasp that bar, no matter what feat you are to accomplish, all you should be thinking about is the POWER you put into the pull, or press, or whatever else you are doing. You cannot afford to think of anything else, and if the weight is really heavy you have not the time or opportunity!

Note: One of the greatest feelings, one of the greatest aspects of lifting heavy in low reps (and a one, and-a two, an-a three) is THE SENSE OF IMMEDIACY created. There's no humming and hawing and thinking and babbling crap in your head when under a heavy bar or when getting a heavy load moving. It's a self-imposed Zen event, Baby, and you can put it on yourself whenever you want it. So there, high and mighty "spiritual" types. We got your game, got your number and it's all there. Shove some "devotee" under a heavy  bar, back him out and shout SQUAT! Mystical, eh. Sexual? You bet yer puckered red-eye. But that's something we just don't mention much, do we.

As I mentioned previously, in your original training you must practice style (technique), you must use poundages that allow you to concentrate on the different points whilst actually performing. Only by doing so can you develop a style that becomes so automatic, so set in the groove, so dependable and confident that eventually you can rely on natural instincts to perform this same style and concentrate solely on POWER.

Power is the key to big poundages. After your initial training the development of power should be your main aim, but more on this later, now we must be content with performance and primary training.

It is essential, even in the very first instance, before you even think about technique or anything, that you have the correct "approach" to the bar. By this I do not mean the way you walk up to it, but your mental attitude towards it.

Do not be overawed by any poundage. If the weight is heavy you must not be intimidated. Actually the heavier the weight the more self-instilled confidence you need. CONFIDENCE is the keyword, and confidence as far as weightlifting is concerned can be self-promoted. You have to convince yourself that whatever it is you have to do, you can do it; you have to beware of developing the previously mentions "5 pound complex" . . . even in preliminary training this is most important.

A few pointers on style and some idea of procedure will not come amiss at this stage.

First, remember that there are certain basic principles that must be adhered to. No two persons are alike either in structure, temperament or any of the other things that MAKE A MAN WHAT HE IS. Therefore a man must arrange his training, develop his technique to suit his own personal make-up, but as I said, certain principles do apply.

Stand with the shins about 1 inch from the bar. Bend over and grasp the bar, then center the eyes on a spot on the floor about 3 feet in front of the bar. Now lower the buttocks slightly until the thighs are parallel to the floor. This is the strongest commencing position.

From here the initial pull is with the legs. A vigorous thrusting movement to impart impetus to the bar. When the first movement is completed, without pause continue to pull strongly. As the bar reaches midway, concentrate on pushing your hips through, and, still pulling strongly, split under the weight. Allow the head to follow the body until the weight reaches arms' length, then, looking straight ahead, push the head forward vigorously to ensure a good lock.

I am not a believer in "hang" snatching for beginners. It is impossible to drop the weights into the correct position every time, so to ensure always commencing correctly do all your attempts from the floor.

For the first while I said it was important to concentrate on style. The first few weeks to a month should suffice for now. When this has been completed, then you  can start to consider schedules and poundages. In the meantime style is the thing and single repetitions with a moderately heavy weight are the best medium for training to accomplish this.

In the next article I propose to deal with some power-promoting assistance exercises on the Snatch and attempt to give some advice to the advanced performer.

Sexual. How 'bout that.