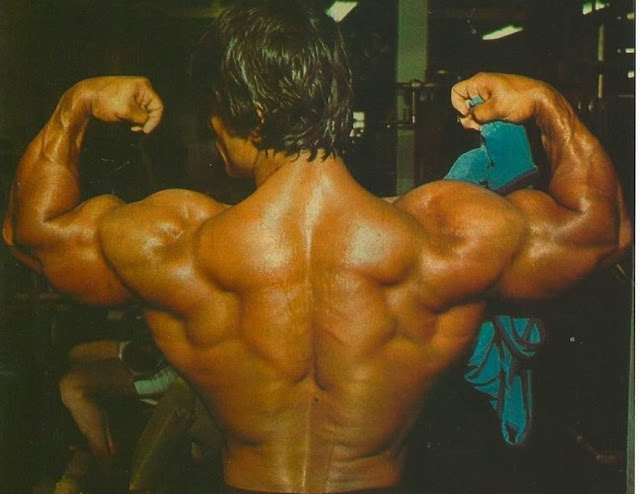 Overcoming shoulder back-lack is no insurmountable problem. It's not even a crisis. It's not like overcoming a genetic defect such as curveless calves, stick-figure forearms, or lats and biceps attached too high. With flat-land west-forty delts it's mostly a matter of priority, not only for what must best be done, but also for what should be avoided. Spino-deltoid depletion is not necessarily from neglect. To get things done in order takes some backtracking; first, the purpose of the shoulders should be examined.

The term deltoid comes from delta, the triangular Greek letter. The tri-headed shoulder muscle converges on the humerus. The delt moves the upper arm in three directions (forward, sideward, backward), but always away from the torso. Such movement is abduction: the shoulder abducts the upper arm. Since all this is really quite simple for our purposes, why should your rear shoulders fail to prosper when all you do to encourage them is to move the upper arm back and away?

Quit thinking that the bent lateral is your only recourse; there are selections galore to help you overcome your disparity - and despair. Here's how to start a full deposit on the shaded side of your deltoids.

The persistent complaint of rear shoulder lag surprises me constantly. There are several synergy-laden movements which co-emphasize spino-deltoids. 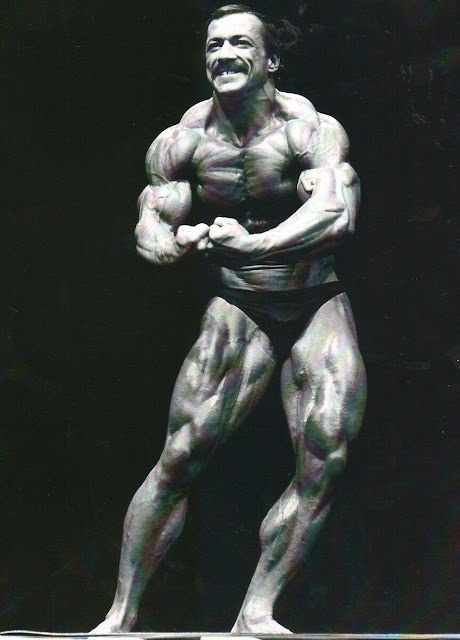 . . . included only two specialized shoulder exercises, because he realized that shoulder receive plenty of stimulation from chest and back movements.

Personal experience concurs with Viator's belief. I've seldom used shoulder specialty programs and, although proportion and line are my long suit, my shoulders are one of my better bodyparts. Happily, they have a melon shape. When I want to make the rear delt stand out, I'm able to command it. All-round, overall upper body workouts did work out!

The number of synergistic selections which positively influence the posterior delts is great. In fact, there are just as many available as there are for frontal and lateral delts. So, you have no further excuses for cannonball delts with the back sections sheered . . .

Rows -- All types except upright ones where the hands are pulled from below waist to below chin. Whether you choose bent rows, machine rows, or cable rows seated or standing, make three adjustments in execution:

Be assured that the rear delts and upper back will be better stimulated than usual. Since the types of rows recommended are, in general, primarily geared to lat development, bear in mind that the higher, wider adjustments of grip and bar direction emphasize upper/outer latissimus dorsi. You may want to include a regular row or other lat exercises directed to the entire and/or lower muscle area. Another simple solution is to merely forego the suggested adjustments after rear shoulders rear up to satisfaction, and then return to rowing as usual.

Chins to Chest -- Hand spacing should be fairly wide once again. Just past shoulders is probably best. If chinning to chest is too difficult, or too advanced for you right now, chins in the rack, rack chins, where a bar is placed on the pins, are an excellent substitute. Future progression comes from the addition of plates, nestled in the lap. With the regular chin progression, add weight by way of a belt.

Oblique Pulldowns -- Rather than pulling the lat bar or pulley handles straight down to chest top or behind the neck, change the angle. The angle of pull can be altered in a couple of ways: sit back so the bar is away from your head, and so will cause the downward pull to finish at the lower pecs; reduce the angle of your incline bench, and with bar or pulley handles in two, lean back and go for it. Yet another way to adjust angle to better suit back-tract delts is to simply lie flat on a bench and bring the lat bar to your chest, in many ways similar to rack chins. This mimics the "chin-to-chest" and may be preferable for some trainees. 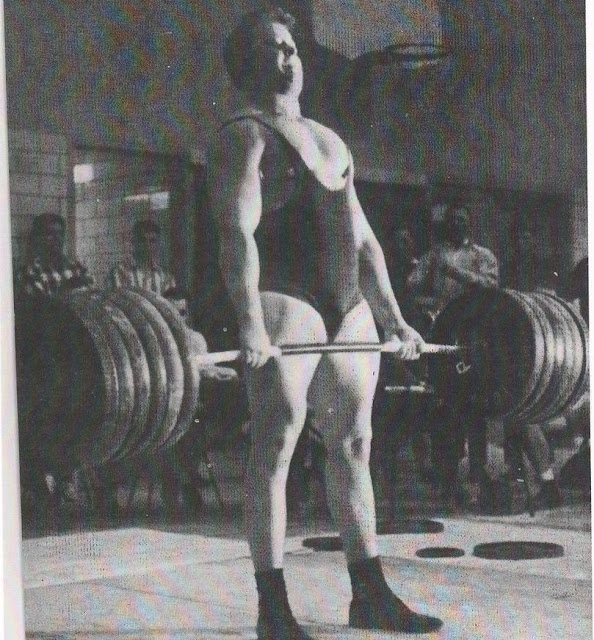 Don Cundy.
No explanation ever needed for reminding people of him.

Yes . . . most wouldn't consider the regular deadlift as being connected with your quest, but it certainly contributes . . . almost isometrically. Thrust those shoulders back proudly at the completion. This will co-emphasize our current pet shoulder muscle. [Or, just work up to enough deadlift weight to stress every muscle in your entire body. I'm trying to think of any muscles that aren't part of succeeding with a real hard single. Not counting those on the guy who's just leaving while you're lifting.]

Power Clean -- The start of pull of the movement is similar to the deadlift, but the finish or clean part dynamically charges the posterior deltoids. And just think of all the power 'n' brawn bonuses in store!

Since the large latissimus unit spearheads the work force for most of the recommended primary exercises, and since arms and other back muscles assist, your quest for a back-shoulder round-up will be better served by comparatively high numbers of sets and reps.

Just as there were an equal number of synchronized power motions for each deltoid head, so is there a commensurate number of isolation motions available for each shoulder section. As with most of the influential synergisms, these isos make rear delt response more positive through little alterations.

There are four isolation movements:

Bent Lateral -- The staple isolation exercise, the first to come to mind. Use one arm at a time. Using both simultaneously inhibits a degree of contraction at the top. While topped out, move the hand straight back just a fraction further. Do 4-5 sets of 10-12.

Compound Kickbacks -- One of the favorite triceps shapers which, when compounded properly, can also blitz dorsal delts to a heightened degree.

Regular execution has the trainee bent forward with his free arm supported on a bench. The working arm starts with a dumbbell drawn to the shoulder (as if at the top point of a single row), then "kicks" the dumbbell back as the arm completely straightens. A fierce contraction is felt in the triceps. Done in the regular, strict manner, kickbacks necessitate lighter resistance.

To harness that hind deltoid, use a heavier dumbbell, and fudge a bit by kicking back rather quickly so that your posterior shoulder assists in lifting the bell to a degree higher. The tension lost at the commencement of the movement will be reestablished in the lower triceps when the higher back-lift occurs. Believe me, such kickbacks can be builders (as well as shapers) for both triceps and dorsal delts. Furthermore, the long head of the triceps originates just beneath the origin for the spino-deltoid, and that's why these intra-body parts complement one another so nicely.

Sets x reps: 4 x 10. Forearms should be padded to prevent bruises, because they'll make contact with the one plate of the dumbbell.

Pioneer strongman George F. Jowett endorsed straight-arm kickbacks in his shoulder courses. These (done with either cable or freeweight) are, of course, excellent -- and will greatly tense triceps via sustained contraction. You may do stiff-arm version while standing (as opposed to leaning); at the midpoint your arms will be swept back, making you look like a competitive swimmer ready to launch yourself.

Here's a pic from one of Jowett's courses - 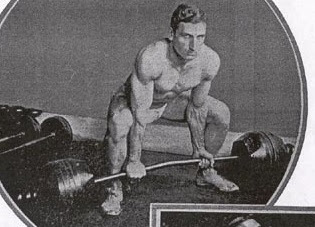 Seated Shrug -- Use dumbbells which allow 12-15 reps per set, and do 3-4 sets. Being seated curbs cheating. Shrugs focus on the traps, to be sure, but back-shoulders get blitzed nearly as much, especially if you lean forward as you shrug.

Counter-Flyes -- Whether flat or inclined, with dumbbells or pulley attachments, the prime motion of the flye must be countered, Flyes become a flip-side mirror image of the most direct back-shoulder isolation exercise, the bent lateral. As you return the dumbbell to the start position, shift your concentration from pec to rear delt. If you're using cables, retro-activate, resist and slow the antagonistic tug. If the pec deck is employed, raise your fists high enough to bring the biceps parallel with your shoulders. How 'bout it . . . you get two specialty-part exercises in one!

As mentioned in the introduction, shoulders that are comparatively flat-backed may not be that way because of neglect. The condition may well be due to a disproportionate inclusion of frontal and/or lateral deltoid movement in the cumulative training programs. Even if you're dynamically involving your hind-shoulders, say with a single, synergistic influence and one iso, as long as there's an equal number of exercises for anterior and side shoulders, the poor posterior head will never catch up.

To prevent this continued disproportion, steer clear of frontal shoulder stuff - especially isolation. This means cutting back on all types of bench presses and standing presses; this means eliminating straight-standing (upright) rows to the chin, pullovers, high pulls, and front raises. This exclusion is only temporary, until the dorsal delts hold their own. For chest basics, sub with a straight up/straight down bar dip. For chest specialization, flyes are strongly encourage, of course.

Basic exercises involving the side head are okay. Suspension of isos (islolation exercises), again for a time only, may be wise. It is my opinion, though (one surely shared by many others), that you can't get too much lateral deltoid development.


Return the the section above on "synergistic influences."

Choose one or two exercises.

Then, also return to the isolation listings. Select one isolation exercise to complement your synergistic one(s).

This will comprise your rear shoulder course for the next three months. After that, if shoulders are not harmonious, fashion another course from the selections available, and stick with it for another three months. And so on, until you beat back-shoulder lag.