I Was Once a Monster - Bruce Randall 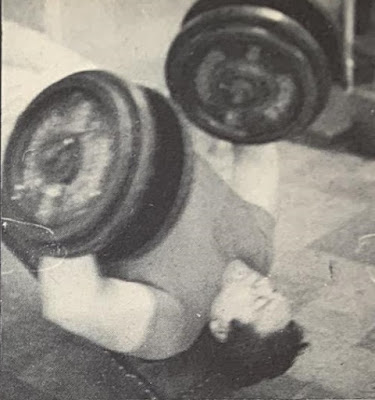 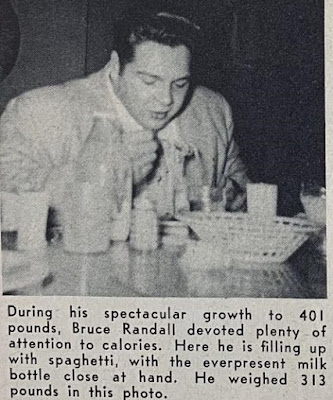 Looking back over my 3 years and 3 months as a weightlifter, I find that I have gone literally from one extreme to the other. I have tried many innovations, routines and experiments to obtain my desired goals. Frankly I find that there is no pat set of rules that one may apply to all men. Each man, I believe, must find the program, through trial and error, that best suits him and his desires.

I began my training on January 3, 1953, in Norfolk, Va. I was a Marine and wanted to play football for the Base team. My object was to weight 225 pounds and still had a couple of months to go before practice began. Then I thought I'd go to 250 and then drop back to 230 during spring training.

By the time I weighed 250 pounds I found myself deeply in love with the sport. During this time I met a man whom I came to respect and admire greatly. This man is Walter Metzler. His help and guidance were invaluable to me during my stay at Norfolk.

Another inspiration was Steve Massios. Steve was a truly fine man and his loss was a severe one to all who knew him. He possessed an iron will and would have, I am sure, reached the acme in the world of weights.

Chief Metzler persuaded me to forget football and concentrate on weightlifting. Using the principle of increasing my bodyweight to increase my strength, I went from 203 pounds to 342 in 14 months. I weighed 342 pounds upon my discharge.

My training routines at that time consisted of a few limited movements. I used the incline bench press (45 degrees), dumbbell bench press, and a few optional exercises. I would start with a weight that I could handle for 5 reps and work on it until I could do 8. Then I would increase the weight 10-15 pounds and start again with 5 reps. I did 3 sets in all movements.

Three years prior to my weight training I broke my leg in seven places. Five in the ankle, one in the calf and one in the thigh. Because of this I found doing the squat rather difficult. The first time I tried one I could not come back up with 190 pounds. Being somewhat discouraged I neglected to work on the squat.

When I weighed about 245 pounds I thought I'd try one with 300 and made it. I tried another one with 405 when I weighed 280 pounds and was successful. Every once in a while I would try one as my weight increased. In 9 separate attempt I went from a failure with 190 at 203 bodyweight to a success with 680 at a weight of 355.

I relate this because I think it might interest you. The one exercise I did do, which may have had some good influence upon my squat, was the good morning exercise. This was not done in the strict manner because I had to bend at the knees in order to compensate for the weight at the neck. I made 685 pounds with my back parallel to the floor. 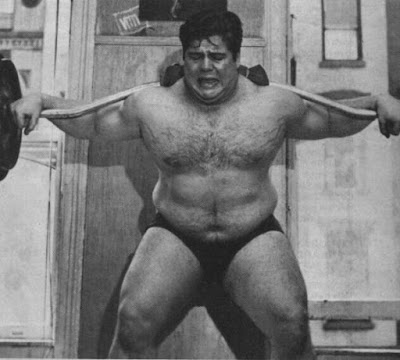 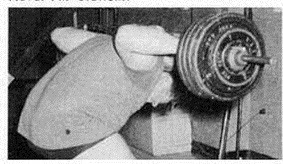 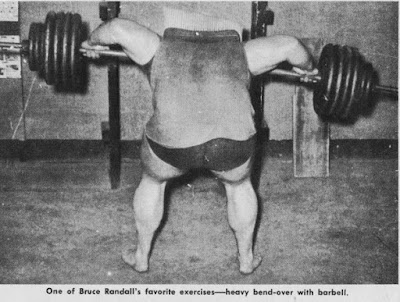 On August 2, 1955, I weighed 401 pounds in T-shirt, loafers and slacks. I decided to try to return to normalcy. The first week I lost 17 pounds. I reversed my routine and did many reps. I spent many hours in the gym during the summer weeks. One week I trained 81 hours, and once trained 23 hours in 2 days. I lost 106 pounds in 11 weeks and since then have lost 218 pounds in 32 weeks.I went down to 187 pounds. For a few months I trained 6-7 days a week and used 19 different exercises daily in my routine.

I will close the this one thought that I have found helpful. If one follows these two rules he can accomplish anything.

1) Ask and ye shall receive.
2) The Lord helps those that help themselves.


Editor's Note (Peary Rader) : Some very interesting conclusions may be drawn from Bruce Randall's unusual experiment in gaining muscular bulk and losing weight. We know of no similar experience.

It has been commonly accepted by most weight trainers that the way to build bulk is to do a lot of bench presses, deep knee bends or possibly deadlifts; to eat five or six large meals per day, and to drink lots of milk. Low reps with heavy weights have been favored for strength building. High reps - certainly 20 or more in the deep knee bend for weight gaining.

Randall's experience bears out some of this, but whereas some instructors insisted that the squat was the be-all and end-all of bulk worshipers, he NEVER used this exercise at all. Previous giants, notable Hepburn and Anderson, had led the way to combination power-bulk gains by using low reps with lots of rest between efforts - the "rest-pause" method.

Hepburn is said to have favored the bench press, although he did considerable squatting and a lot of power presses standing, taking the barbell off a rack at chest height. At the time the Canadian made his great gains and became the holder of the world press record, the air was filled with the screams of bench press protagonists, who claimed wildly that this was the GREATEST exercise ever devised by mortal man. Some of these small-minded teachers are still screaming, but is sounds like they were talking to themselves. For at the time when they had everything taped, along came Anderson . . .

Andy did no bench presses early in his career, and comparatively few at any time. Instead he did heavy deep knee bends and dead-lifts. As he progressed he began to do some power pushes and presses from the rack. He became bigger, stronger and even more fantastic than Hepburn. He did no high reps on his squats, but instead did very low reps with weights so great that they stagger the imagination. Whereas previous great strongmen had struggled up with 500 pounds in the squat, he had no mental barrier, being isolated in the Tennessee Mountains, and went on to do 600, 700, 800 and 900 pounds!

Now the experts shouted with glee. The squat, plus gallons of moo had made Andy great, and would do the same for any spindle-shanked kid who craved beef on his frame. The route to bulk was now fully charted, and anyone could follow.

And now . . . along comes Bruce Randall to prove the experts wrong. Because of an injury, he could do no squats, nor heavy dead-lifts. The bench press was not his major exercise. He invented, perforce, a new bulk-gaining exercise, a modification of the forward bend, or Good Morning exercise, and like Hepburn, and like Anderson, he rapidly added weight to this movement until he was doing the incredible poundage of more than 600 pounds!

So what does this teach us?

Look at the points of similarity in the routines of all three "monsters" and what do you find? Not that the squat or the bench press or the good morning exercise is responsible for their gains, but instead that they all used the rest-pause method, employing great weights in a way that would affect the largest muscle masses, back, loins, legs . . . and doing few reps and resting for long intervals between efforts.

They all ate more than the average man - naturally. Milk was taken in large quantities. So it would seem that this is the ideal food for monster-building. Any hog farmer could have told you this. Anderson, in particular, would seem to indicate that milk is the magic ingredient, for he does not eat excessively of solid foods. On trips. little fellows like Chuck Vinci have been known to out-eat Andy at the training table - but they never out-drink him at the milk jug!

1) there is a definite relationship between muscular bulk and the poundages you can lift;

2) you must use low reps and heavy weights with plenty of rest in between efforts.

It is easy to see why large physical measurements increase power, because they increase leverages. When Anderson does a squat, for instance, his thighs and calves show red in the back where the two meet, mute evidence that he cannot go below the parallel position because his leg bulk limits movement. The same thing applies on presses.

Possibly the most interesting part of Bruce Randall's unique story is his return to "normalcy," coming down to 187 pounds from a bodyweight around the 400 figure. Seemingly he has accomplished this without physical toll, such as loose skin and sagging muscles (although some of this is slightly in evidence in some of the reduction pictures). What becomes of all the miles of now useless capillaries and small blood vessels? Perhaps the fact that Randall did not remain too long in the monster class is the answer, and certainly his thoroughness in exercising while reducing kept this to a minimum.

All in all, the story presented here is one of the most remarkable documentations ever published of man's control over his size and shape and physical powers.

We now turn in over to the Experts, and trust that their befuddlement will not prevent them from acknowledging that maybe they were previously slightly in error.