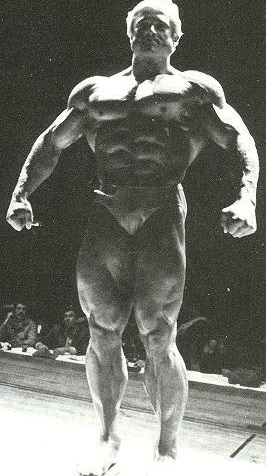 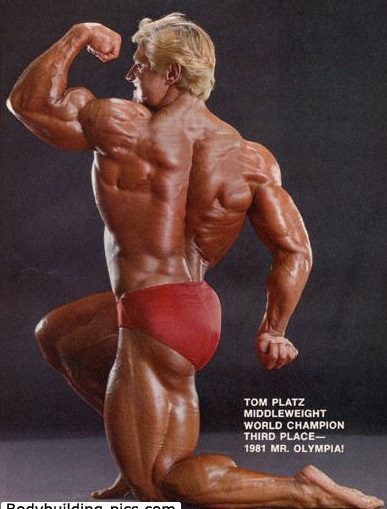 There was no surprise when at Tom Platz's clinic as George Snyder's Olympus Gym that one of the questions centered on his thigh development, for the Platz lower body has been described by many writers as the best in bodybuilding.

As far as Tom Platz is concerned, the squat is the greatest exercise in the book when it comes to thigh development. Unlike the great majority of bodybuilders, Tom is not satisfied to merely squat to a point where his thighs are parallel with the floor. No, instead he believes in squatting all the way down before recovering. 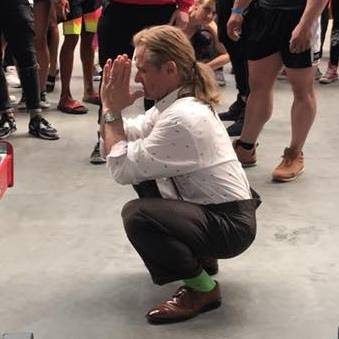 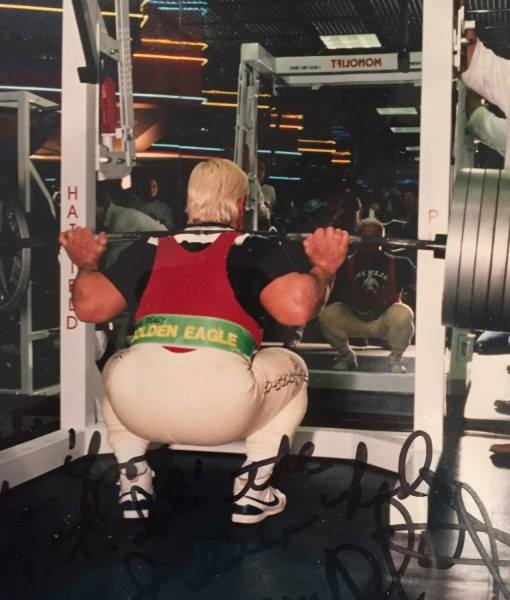 He insists on using weightlifting shoes when performing squats.
They have a slight (wooden!) heel that he says allow him better balance. 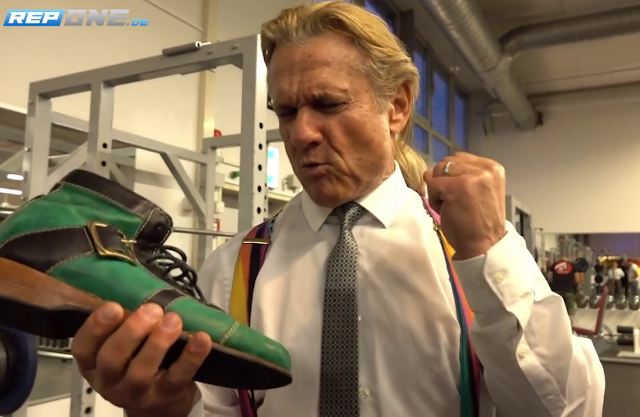 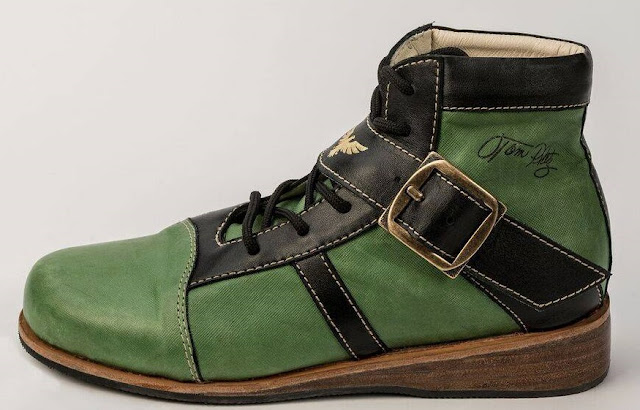 He frowned on the popular use of a block under the heels, on the grounds that this could lead to accidents. The block could move away just during during the exercise and the result might well be a crippling and time wasting lower back problem, or worse. He recalled that once while squatting with a heavy weight, his attention had been distracted and he turned his head to the side as he squatted. The result was a lower back injury that kept him out of the gym for weeks.

While many bodybuilders prefer to perform thigh extensions on a machine in advance of squatting, the better to warm up the thigh muscles, they maintain . . . Platz is of the view that leg extensions retard progress in the squat.

"I have found extensions are fine when the aim is to add deeper cuts in the thighs," he added. "But when I am trying to gain more thigh mass, when I must use heavy weights in the squat, extensions tend to delay improvement."

So he always performs his squats first on his leg days. He also makes a point of resting his thighs for 48 hours between squat sessions. The thighs need that much time to recuperate fully when you have been taking heavy lower body workouts, he contends. At this point in his training, on ordinary days when he is not preparing for a contest, that is, Tom trains his thighs after his calves. Then he performs just two sets of squats.

Note: before continuing here, you should know that Mr. Platz still has a huge passion for lifting and for bodybuilders. Especially when it comes to SQUATS. Do yourself a favor and check out some of his current videos on YouTube. His passion is infectious. It extends past the coldness of digital technology in waves of inspiration that can only be stirred by someone with Tom's depth of intensity and love of the Iron Game. He can take a person way beyond the point of what they consider the end and their limit. Still. Check 'em out!

Yes, two sets of squats, but what sets they are!

Having satisfactorily warmed up the thigh area with light squats (135 pounds, 10 reps), he load the bar to 405 pounds and grinds out 35 repetitions.

His second set is done with 450 to failure, usually 35 to 40 reps! On a good day, when he is feeling particularly high, Tom will decrease the weight by some 50 pounds and quickly do another 40 reps.

It is worth noting at this point that Tom places the bar high up on his shoulders for squats, contrary to the powerlifting, power squat method of holding the bar much lower down the back.

Normally he squats in three phases, for:

1) Power, Strength and Size;
2) Definition, Cuts and Ripped; and
3) Ripped with Size.

Ripped, of course, is that stage past being merely defined (cut), when there are striations even across the thigh muscles.

In the first instance he does about 7 sets of squats, working up in weight. He begins with 10 reps, and ends with 3. His last set is done to failure.

The ripped condition of his massive thighs, for which Platz has become renowned, is achieved from squatting for 6 sets: 10 reps for the first two sets, 8 for the third set, 6 and 4 for the last three. The weight is increased for each set.

Tom follows up the regular (high bar, Olympic) squat with hacks on the machine, then leg extensions and leg curls. In the last movement he enlists the aid of a training partner for forced reps and negative resistance. Interestingly enough, in these last exercises, Tom works the poundages down. That is, he starts with the heavier weight and gradually reduces it, compensating for the weight decreases with increases in the number of repetitions.

According to Platz, "When training hard, particularly when on a rigid diet before contests, it is important that one takes sufficient amounts of calcium and other minerals, otherwise you will experience the horrors of low energy during workouts."

Another important factor in Tom's pre-contest preparation is high intensity training, by which he means "pumping the muscles to maximum each training session."

Here the accent is not on handling heavy poundages, but rather in pushing the maximum amount of blood through the muscle each set. There is seldom more than a 15-second pause between sets.

In offering his own contest training routine, Tom is quick to say he does not guarantee results will be as great as those experienced by him.