TRAIN FOR POWER, PART ONE

Today physical culture has more followers than ever before, and in consequence the progress of the past few years has been amazing. Weight-lifting (read "strength" here) records are constantly being broken and the standard of physique has also improved. Unfortunately, however, bodybuilding and weight-lifting are for the most part regarded as two distinct sports, and it is rare indeed that you find a bodybuilder with REAL POWER or a weight-lifter with a PRIZE WINNING PHYSIQUE.

By power I do not necessarily mean that one should become an Olympic lifter and specialize on the press, snatch, and clean & jerk. (Or a powerlifter, if written today). My interpretation of a powerful man is one who can put up a good performance on a variety of lifts, and one who instantly comes to my mind when I think of a strong man is Marvin Eder, whom I consider to be The World's Strongest Man when bodyweight is taken into consideration. Marvin has successfully combined training for Power and Physique. His bench press of 480 pounds and his reported overhead press of 350 are the heaviest weights ever lifted by a man under 200 pounds bodyweight. John Grimek also comes into the above category -- having been an American weightlifting champion and winning every physique honor possible. Here in England we have two fine examples in Buster McShane and Bill Parkinson.

But the fact remains that there are many top bodybuilders who cannot lift weights in accordance with their physique and at the same time there are strength trainers whose physiques leave much to be desired.

When Stan Stanczyk was the world light-heavyweight weightlifting champion, it was reported that some youngster who saw him on the beach did not believe that Stan was the world champion because the kid said, "I know fellows with bigger muscles than you." Whether this is true or not, I do not know, but it is a fact that Stan did devote a lot of time to bodybuilding.

I have listed a number of exercises which I consider to be real Power Builders and can be used by bodybuilders and strength men alike. I have split them up into TWO SCHEDULES and would suggest that you train three nonconsecutive days per week on Schedule One for a period of one month followed by a week's full layoff, and then train on Schedule Two three times per week for a month and note the increase in poundages handled at the end of this time. 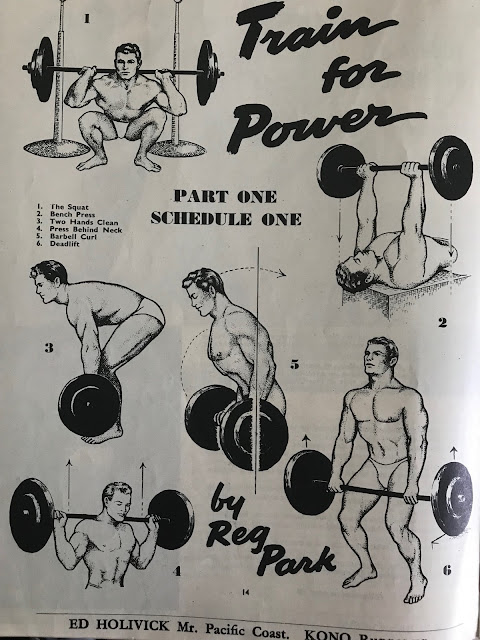 This is a great power builder and has been put to good use by such men as Anderson and Hepburn in their own training, but it is a lift which many weight-lifters omit completely; while bodybuilders tend to rely too much on squats to a bench. Like my good friend Leo Stern, I have always favored the parallel squat and prefer to wear heels on my lifting boots rather than placing the heels on a wooden block. The heeled boots give me a firmer base as well as greater confidence. You may have noticed that Kono lifts in shoes and Sheppard has a built up heel on his lifting boot. I also believe a belt should be worn when performing this lift.

The squat should be performed for 5 sets of 5 repetitions -- increasing the poundage with each set. For example, I do 3 sets of 5 on the squat working up to the heaviest weight I can handle then I increase the weight by 100 pounds and do 1 set of 5 half squats, and then increase by another 100 pounds with which I perform 1 set of  5 quarter squats. It has been reported that Anderson can handle 1,500 pounds for the last method and Pete Farrar and myself used to perform 10 reps with 1,000 pounds.

This lift has created a great deal of controversy overt the past few years but nevertheless both the B.A.W.L.A. and the A.A.U. now use it as a strength lift in championships. There are several pros and cons but if the lift is performed correctly (pressing each repetition from the chest) and not bounced off the chest, it is a great power builder both for deltoids and triceps as well as giving speedy development to the pectorals. The strict style does in fact cramp the pectorals more than the cheat style. This lift has done wonders for me as I know it has done for Eder, Hepburn and Parkinson.

A variety of grips can be used but I favor the same width as taken when performing Military pressing. 5 sets of 5 reps are ideal.

The technique of this lift has been fully covered in Al Murray's article on the Clean and Jerk so I will not dwell on it, other than to say 8 sets of 2 repetitions should be employed, working up to as heavy a weight as possible. This exercise can then be followed by taking a weight in excess of your best Clean off the squat stands and holding it at the shoulders for a count of 5. Repeat this 5 times.

Like most bodybuilders I have favored this exercise for shoulder development -- and in order to illustrate the power this lift can build I include here the best lifts of several prominent men: Doug Hepburn does repetitions with 300 pounds; Eder 300; Eiferman 280; Wells 280.

The bar can either be cleaned or taken off the squat stand, whichever you prefer. The weight should then be pressed and not jerked to arms length and lowered until it touches the back of the neck. Perform 5 sets of 5 reps with the maximum weight possible.

Perform this for 3 sets of 5 in strict style increasing the poundage if possible with each set, then increase the weight by 20 to 30 pounds and do 2 sets of 5 adapting the cheat or swing style.

This lift should be practiced only once a week working up in singles until you have reached your maximum. It is better to attempt this lift on a rest day and not when performing exercises 1 to 5.


There are of course other important factors which must be taken into consideration when training for power and in order of importance they are as follows:

1) To overcome the fear of heavy weights by having a complete positive mental attitude when training. Aurelius said, "Because your own strength is unequal to the task, do not assume it is beyond the power of man; but if anything is within the powers and province of man, believe it is within your own compass also."

The Meditations of the Emperor Marcus Aurelius Antoninus (wiseguy) :
http://files.libertyfund.org/files/2133/Aurelius_1464_LFeBk.pdf 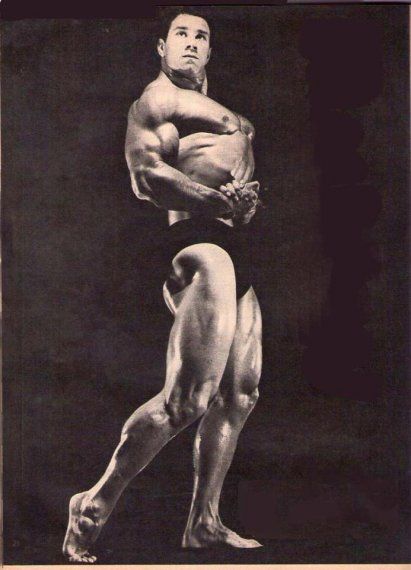 Since writing Part One a number of incidents have arisen which I feel will be of interest to our readers. They are as follows:

1) I received a letter from Al Murray advising me that he had prepared an article, "Body-builders Can Be Strong," which was prompted by the trend  in the London area amongst the body-builders.

When Chas Coster learnt of this he was extremely pleased because it would emphasize the importance of POWER TRAINING, of which he has long been a great advocate. Many authorities are inclined to stress too much importance on technique rather than on power.

3) An old copy of S & H magazine showed up at the office showing Eder as he was at 17-1/2 and giving a list of measurements along with his best lifts at the time. At a height of 5'7" and a bodyweight of 181 pounds -

That was exactly five years ago (1949) and for your interest his measurements now are:

Marvin's interest has always been on building a powerful physique and during our workouts together in 1951 we used 350 pounds on bentover rowing, also 120 pound dumbbells on the seated DB press -- the other lifts and poundages escape my memory.

Interesting facts about both Eder and Hepburn -- whilst both train on the press and bench press, they do not practice these two lifts on the same day, and when utilizing the bench press to improve their pressing ability as I understand Davis also does, they use the same width of grip as they would when performing standing presses and start the press from the chest.

Issy Bloomberg who I had to pleasure of training with during my recent tour of South Africa, and who pressed over 300 pounds as an amateur is another lifter who appreciates the importance of power of body-building exercises such as the full and quarter squat, bench press, bentover rowing, etc., in order to build up his body power and so benefit his Olympic lifting.

Although I may be stepping on someone's corns, it has long been my contention that some of the British lifters who wondered why their performances do not compare with those of the Russians, American and Egyptians (taking the advantages of these countries' lifters into consideration such as time and standard of living) do not stress sufficient importance to such exercises as heavy squats, bench presses from the chest, rowing motions, deadlifts, etc. A comparison which comes to my mind is training for the "long jump." Whilst the actual jump is of importance, and needs to be practiced, it is a fact that sprinting plays an important part and most long jumpers are excellent sprinters. The same thing applies with the three Olympic lifts, whilst it is essential to practice the correct style, technique and performance of these lifts, it is true that such exercises as the full squat build up terrific power and coupled with actually performing the Olympic lifts assists improvement on the latter. Anderson is an example of this for he trained purely on the squat and built up his body power so much that when he went on to the Olympics his performances amazed even the most ardent physical culturists.

In order not to confuse you, my interpretation of body power means performing exercises such as squats, deadlifts, bench presses from the chest and bouncing, which permit you to handle more weight and so build greater ligament and tendon power than can be derived from the practice of the press, snatch, and clean & jerk ONLY.

Those of you who have never practiced this lift may experience difficulty in balance and also a strain on the wrists, but if you allow the bar to rest on the deltoids instead of trying to hold it at the chest you will find it much easier. This exercise is also very beneficial to lifters who employ the squat style technique. Perform 5 sets of 5 repetitions.


Exercise 2: The Clean and Press

For technique see the Al Murray articles on this blog. As for poundages and repetitions I would suggest that if your best Press is 250 pounds, warm up with 200 x 2 reps, then 220 x 2, and finally 5 sets of 2 with 230. If you are still strong, perform 2 sets of jerk presses with 240-250, doing 3 reps a set. When you are able to perform this schedule increase your poundages by 5 pounds throughout. Use a slightly wider than shoulder width grip.

This exercise has quite recently been accepted by the A.A.U. as one of their strength lifts. Using the same grip as when performing cleans, lift the bar from the floor until it rests across the thighs and then with a hard fast pull lift the bar up until it touches the neck with the elbows held up high, and then lower the bar to the thighs and repeat from there. Perform 5 sets of 5.

This is a particular favorite of Eder, and I well remember his brother telling me that he considered this exercise had done more for Marvin than any other. Perform 5 sets of 8 and use added weight.

Numerous men, such as Grimek, have handled 100 pound bells on this exercise. Perform 5 sets of 5.

When following both schedules do only do deadlifts once a week, on an off day and on their own. Work up in singles to the highest poundage you can lift. 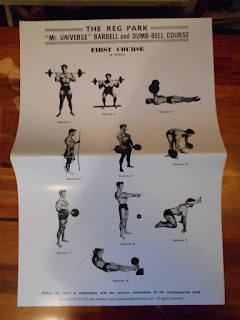 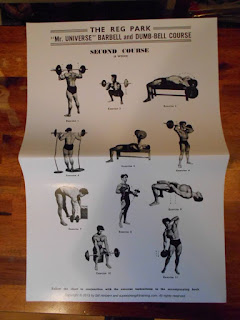 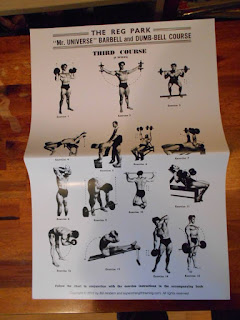 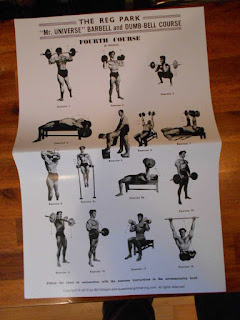 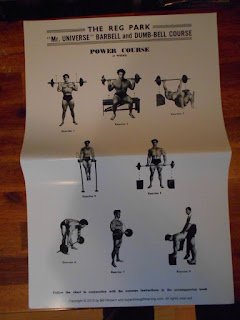 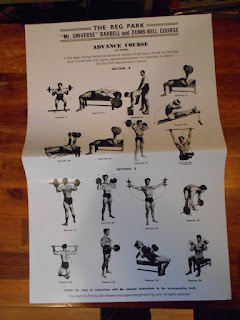 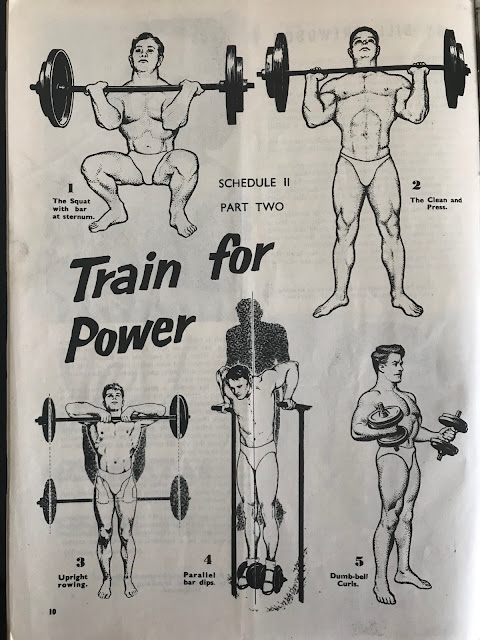