This article is taken from the March '68 issue of Joe Weider's Muscle Builder/Power.
That cover likely sent a lot of guys to the gym more often.
Yeah! It's a Classic.

Seriously, fellow lifters, you have to be a bit of a pain freak to do the full-blown type of calf training. Torch 'em . . . Burn 'em . . . Blow them babies up! That type. I was thinking about this on my afternoon "rapid" transit commute to work today.

There was a hellish accident on one-a the main bridges around two o'clock. Some idiot's semi flipped and wound up blocking all lanes of bridge traffic going in both directions. So, all the vehicles that'd normally be going over this bridge were diverted to the next one . . . halfway across town, right along my usual bus route.

I got on the thing unknowing. Who bloody knew! First thing that clued me in was the fact that the bus took 10 minutes to go one block. Okay then. About 60 or so more to go! I should be at the train station just in time for Christmas. It'll be nice and cold then too. Bonus!

It was bloody hot. Packed on that bus like pigs heading for slaughter. Standing hip to hip, sweat rolling down the small of your back, some stranger's baby in a stroller screaming. The heat. And that's around block two.

Standing there on that stinkin' bus next to that screamin' kid. The strap handle you hang onto starts looking pretty tempting. "Deranged man breaks infants neck then hangs himself on bus strap." That's when I decided to get off and walk to the train.

After a stiff 40-block walk in the sun I showed up at the station just in time to run up those four big flights of stairs and squeeze on the train. Pouring sweat. Wet shirt. Sure, I guess I mighta smelled a little too. Musta been the salami and cheese sandwich in my bag cooking.

Hopefully the driver of that overturned semi died in the accident.
Hey, I know I'm not alone in that sentiment.

Anyhow, some of this intense style of calf training . . . I figure you gotta be a bit of a pain freak to really get deep into it. Or not. 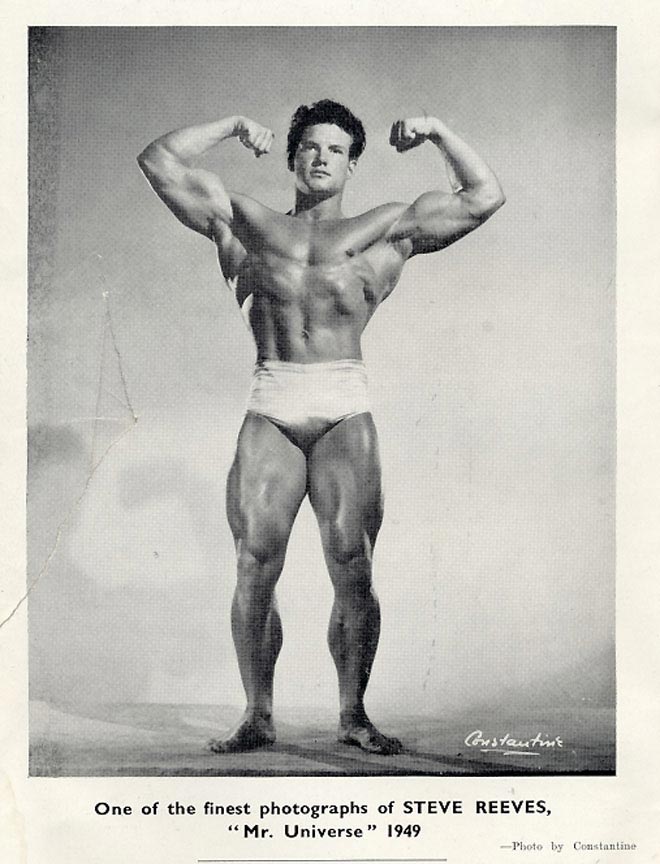 Stubborn and difficult to develop, it requires special attention; it must be bombed into growth. No matter how well developed the thighs, the legs, as a whole, cannot be impressive when the calves are small.

Take Steve Reeves as an example . . . perfect from top to bottom. How great would he look if his upper body and thighs tapered down to a spindly base? Get the point?

Because of the density of calf tissue and its distance from the heart (the body's pumping station -- which delivers nutrient-rich blood to the muscles), the calves must be worked a minimum of 20 repetitions per exercise to respond. You must rise on your toes on the base of the big and second toe (when performing various exercises), if you are to develop the meaty inside portion -- the most difficult part of all.

Rotate the heels inward as you rise to the contracted position.

As you lower the body allow the heels to resume the wider position.

The legs should always be slightly unlocked at the knees.
This places stress on the lower part of the calves.

Calves are a "stretch muscle" -- so you must try to lengthen the muscle by stretching at the bottom of the movement. I have discovered that men with poor calf development have poor range of motion. On the other hand, men with good calves have developed great flexibility. Obviously, then, the Donkey Raise is on of the best calf exercises because the bentover position induces great stretch. Second best is to work on the calf machine. 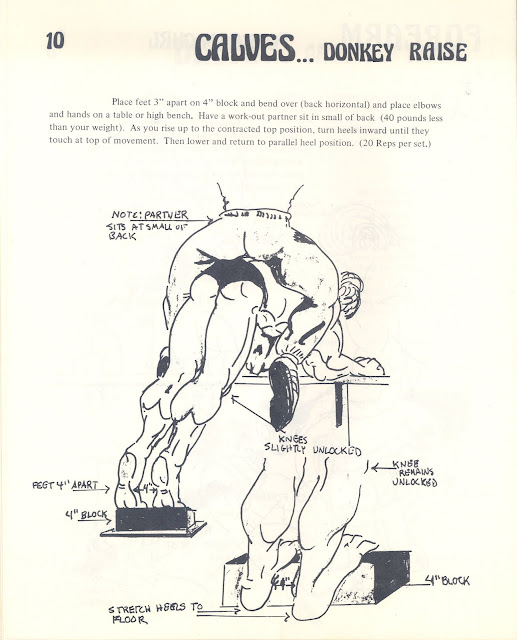 Hard-to-develop calves should be worked daily, but not in the same way. That is, work 3 heavy days and 2 pump days. On your pump days do not tire the calves, just induce circulation. The best procedure is to do sets of 100 or more reps with moderate (bodyweight) poundages. Use good slow form. Do not try to rush, especially when you reach the pain barrier. Speeding usually causes a shortening of the motion and causes pain, or "burns" to the point that you won't be able to take it. Again, work slowly and stretch the muscle at the bottom of the movement and fully contract at the top.