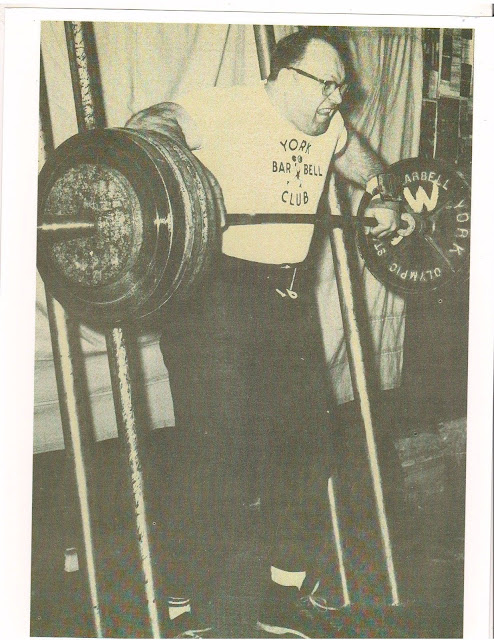 I am beginning this article in amusement as I have just finished running through the books and articles on the two hands snatch which I have collected over the years, many of which have been written in countries other than Britain. The amusing part being the fact that they nearly all cover this highly technical lift in half a page, when one could easily devote 2,000 words to over a dozen sections of the lift. However, in spite of this I will attempt to cover the most important phases in one article.

Let us deal with the grip on the bar. Many years ago the grip used was a comparatively narrow one, this meant that the bar had to be pulled somewhere between the chest and the chin so that you could lower the body low enough to get under the bar. Then came the extreme wide grip which meant that the body could be lowered under the bar before it reached the height necessary with the old fashioned narrow grip, BUT and it's a big but, for when one when uses a very wide grip the power of shoulder pull is greatly reduced owing to the fact that the hands are too far sideways from the vertical line passing through the shoulder joint greatly increases the resistance placed on the muscles of the shoulder girdle.

The correct path is somewhere between the two. Place the arms in the sideways stretch position, now bend the arm to right angles, get someone to measure the distance from elbow to elbow and this should give you the distance of grip suitable to you personally. This will give you the advantages of both wide and narrow grip.

Feet should be placed slightly wider than the breadth of the hips so that during the pull the resistance is transmitted vertically down through the hip, knee, and ankle joint and over the ball of the foot cutting down on unfavorable leverage. Once you have placed your feet in this position grip the bar making sure that it is directly over the insteps.

Your back should be flat but not vertical, otherwise too much weight will be over the heels. Place the shoulders slightly in advance of the bar, head up, eyes looking to the front. This means that the weight is evenly distributed over the whole of the foot and ensures that the bar starts its upward journey along a vertical path instead of the incorrect and common backward pull.

I prefer to call the first part of the pull THE LIFT.

To raise the bar to the height of the knees you should direct the head, shoulders, and hips upwards at approximately the same time, this takes the knees backwards sufficiently to allow the bar to maintain its vertical path.

Now comes the second phase which I call the THRUST OR HEAVE. 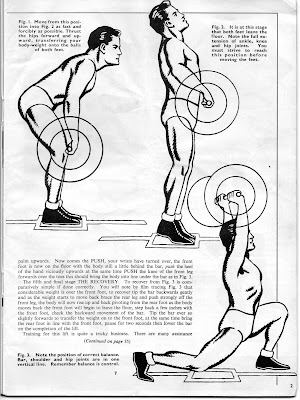 It is at this stage that you exert your full power of pull in this manner. As the bar starts to pass the knees THRUST THE HIPS UPWARDS AND INTO THE BAR. AT THE SAME TIME RAISE THE CHEST AS HIGH AS POSSIBLE PULLING VICIOUSLY WITH THE LEGS, BACK ARMS AND SHOULDERS. This should bring you slightly forward into the ball of both feet and to the point where you feel yourself about to loose your balance forwards.

Now comes the third stage called the SPLIT, and when you do jump astride make sure that BOTH FEET LEAVE THE FLOOR AT EXACTLY THE SAME TIME. This will ensure that your balance is not disturbed by the very common fault of pulling on one leg or kicking back with the rear leg, which causes one to lose balance to one side. Note the full extension of the pull in Figure 2.

Once you have taken both feet off the floor you must keep the trunk and head in an upright position whilst the body is being lowered forward under the bar. The rear foot will then come in contact with the floor first, due to the limitation of hip extension (backward movement of the hip joint). This assists in controlling the balance of the body and can be useful in forcing the body forward under the bar.

The fourth stage is known as the PUSH and it comes almost as soon as the front foot hits the floor. The bar at this stage should now be passing the top of the head, the wrists should now be turning from palm down to palm upwards. Now comes the push. Your wrists have turned over, the front foot is now on the floor with the body still a little behind the bar, push the heel of the hand viciously upwards and at the same time PUSH the knee of the front leg forwards over the toes, this should bring the body into line under the bar as in Fig. 3.

Training for this lift is quite a tricky business. There are many assistance exercises of great value in perfecting the lift itself.

The high pull exercise is a popular movement, but it can be greatly improved upon. Grip the bar as in the snatch itself and perform the pull as in the lift, but instead of splitting the legs for and aft, merely step forward a few inches to regain your balance, then lower the bar and repeat in sets of threes, twos, and singles with similar poundages as used in the snatch, as follows:

There are many variations on this schedule but space prevents me from enlarging the number of schedules. However, I would like to add that the Front Squat (bar held on chest) is a REALLY GREAT SNATCH ASSISTANCE EXERCISE. This is best performed in sets of 5, say 4 or 5 sets jumping by 20 pounds each set until you reach the final poundage where you can just squeeze out 5 reps.