A "Thank You" to Liam Tweed!

Yes!
The Best Crucifix Lifts of All Time:
http://usawa.com/best-crucifix-lifts-of-all-time/
(2010)

Note: This is taken from a monthly column (1951) Charles Coster wrote for "Vigour" titled
Idle Thoughts.

Over a period of time I have had quite a number of inquiries on how to solve certain problems, the most frequent of which seems to be "How to develop the calves" and How to increase the press." I have always felt a little conscious of my own shortcomings when dealing with the Olympic inquiry. This was the sort of information I felt would be better dispensed by people like W.J. Hunt, Ernie Peppiatt, or Ron Walker -- they qualify. 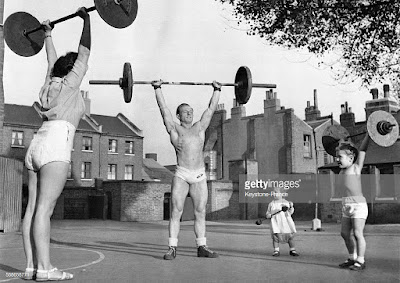 Ernest James Peppiatt.
The one with the heaviest bell. 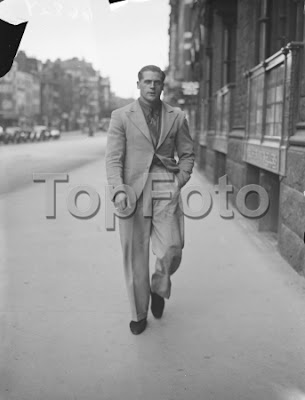 Ronald Walker, July 1937.
Finally, a photo showing just how handsome Walker was.
His lifting ones don't do him justice.

Nevertheless, it is possible to pick up some very useful information and practical experience when one is interested and observant and one Press schedule in particular stands out in my mind.

A certain 10 stone lifter, Alf Griffin of Hackney, who at one time held the British Press record with 198 pounds, found himself year after year 'stuck' at this figure. Suddenly, at a slightly heavier bodyweight, he blossomed out during club competitions with presses of 203-209-214 and, on one occasion 220 pounds.

As I refereed and passed 214 on one occasion, naturally I asked for details. He had discovered a 'new' pressing system it seemed, of unusual rigor, and there were plenty of muscular 'aches' attached. But the most important thing was IT GOT RESULTS and that was what mattered.

Seeing the Griffin was an unusually well-developed lifter of some years' standing and a Herculean hand-balancer to boot, I decided to make a few notes.

Take a barbell loaded to only 60% of your limit Press. Assume a hand-grip 12 inches wider than the one normally used for competitive purposes . . . and perform 5 presses.

When the bar is overhead at the conclusion of the 5th press, 'rock' the bar so that the hands may be 'slid' inward to your normal width press grip and then, with no resp period perform another 5 presses - from behind the neck.

When the weight is once again overhead at the conclusion of the 10th press, 'rock' once again, and decrease the hand spacing until the thumbs are only about 9 inches apart. In this 'cramped' position -- and with no pause, lower, and perform 5 more presses from as low a position in front of the sternum as possible without bending back.

Take a short rest, and then repeat the same routine with the same weight. The lifter has now performed 30 presses.

After a further short resting space, repeat the performance for the third time, after which 45 presses will have been performed.

The weight of the bar must now be altered until it represents only 40-45% of the lifter's limit Press, and after a suitable resting period another 45 presses are performed in the same manner, in series of 15 repetitions, and from the three different positions and angles described.

I myself have experimented with this particular routine, and I can vouch for the fact that it is extremely tough going in spite of the insignificant nature of the poundages. Pressing muscles that had not ached for years became acutely painful at the first onset, and even when one has been acclimatized through use, the pressing muscles always felt thoroughly worked.

In my opinion the Griffin pressing schedule is the best system I have ever come across and I can completely recommend its adoption . . . with the usual warning -- don't expect miracles to happen after the first workout.

try executing a thousand presses in this manner, spread over three weeks or a month, before you form any conclusion. Rome wasn't built in a day, and it takes time for the shape of the physique to alter and for stronger tendons and ligaments to form.

Variety of execution can relieve the monotony of this type of pressing to a great extent, so don't forget that the order of procedure need not always be 'wide grip' -> 'behind neck' -> 'very close'. That order can be reversed, or one can commence with the 'behind neck' position and please oneself whether to finish with the 'wide' or 'very close' grip.

Personally speaking I found the exercise to be much more effective by variations of technique -- and therefore I used to vary as much as possible, remembering Ron Walker's maxim 'to keep the ache as long as possible'.

Finally, the chief point to remember for anyone trying this system:

Don't throw the bar overhead quickly. Don't let the bar 'fall' down. Press upwards slowly . . . and lower the weight to the shoulders slowly. The object of a schedule of this nature is to keep the entire pressing group under CONTINUOUS TENSION for as long as possible -- in order to promote maximum muscular growth.

Ronald Walker at one period of his W/L career used a pressing system very similar to this one, and I hope to mention details in the near future.

Now, to the calf development question.
Requests for information about the possibilities of calf development are common from body-builders and since various authorities have made generous remarks about my calves from one time to another, I suppose this is a section of body-building where I qualify.

The calves are frequently termed the most obstinate part of the body to develop, and so they are -- for some people.

My calves were 'normal' from the start . . . but that didn't prevent me from trying to improve on them, and many routines have been carried through at one time or another.

Years ago, I was about 19 at the time, I worked in a building where there happened to be a couple of half hundred weight iron blocks in the basement.

There were 143 steps from the basement to the top of the building, and such was my youthful enthusiasm in those days that whenever possible I would grip the 56-lb. block weights and walk to the top for the benefit of my calves -- using my toes as much as possible. After some practice I found it possible to ascend from the bottom to the top just by raising on my toes . . . and keeping my knees locked. This increased the severity of the exercise.

In those days I used to cycle to business, six miles, and back again at night, and I always made it a practice to cycle 'with my toes' as much as possible.

In this way thousands of repetitions were performed during the course of time -- and by the time I was 21 the tape measure showed a tight 16.5", sometimes more.

Practice nights at the Hackney W/L Club were three nights a week . . . and whenever a dead lift bar was loaded I frequently 'went up on my toes' for a few reps.

As well as contracting the calf to the fullest possible extent, I used frequently to 'stretch' my heel down to the ground with my toes and the ball of the foot placed on a couple of books.

Plenty of bulk repetition work of all kinds is the only solution for stubborn cases that lack calf development.

People have sometimes expressed surprise at learning my calves were only 16.5 inches . . . but the reason for their large appearance lies in the fact that my knee and ankle measurements are somewhat small.