There's no question that  huge chest is a major asset for a bodybuilder, but there's a lot more to chest training than simply blasting out sets of bench presses. In fact, no single exercise can give you complete chest development. The best approach is to work every square inch of your chest through a multi-faceted program that will build it to eye-popping perfection.

The Function of the Chest Muscles 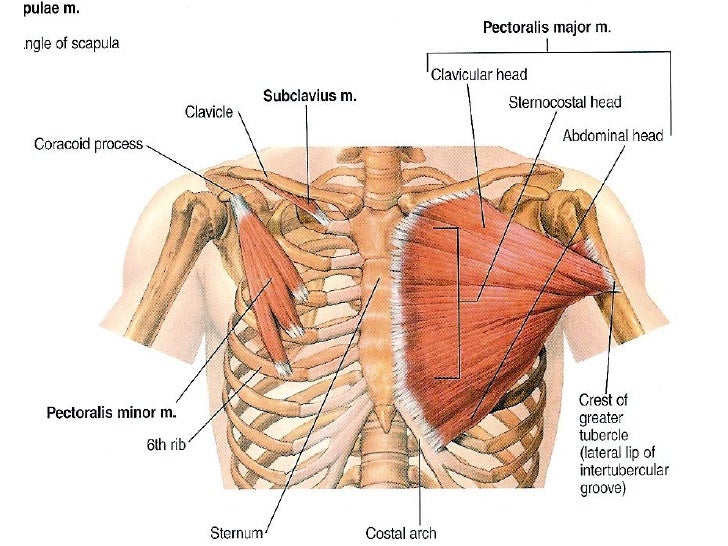 There are actually two chest muscles, the pectoralis major and pectoralis minor. Some bodybuilders think that the pec major is the lower part of the chest and the pec minor is the upper part, which is stimulated when you do incline exercises. That is incorrect. The pec minor is actually a small muscle underneath the pec major. It originates on ribs 3 and 4 and inserts on the coracoid process, which is a bony extension of the scapula. The function of the pec minor is to pull the scapula downward and forward, a movement that does occur to some extent during chest exercises.

The pec major is much larger than the pec minor. It has two heads, or points of origin. The first is on the collarbone, while the second head is on the breastbone and the cartilage of ribs 1 through 6. The two heads function somewhat independently of each other, although both are involved in all chest movements. Both heads are inserted in a groove on the front part of the humerus, the upper-arm bone, by means of a two-inch-wide tendon. (This is what usually snaps off when lifters have "pec tears.")

The part of the pec major connected to the clavicle is recruited most during exercises in which the weight is above the scapula and neck region, while the portion of the pec that originates on the sternum receives more stimulation when the resistance is over or below the chest. That's why most chest routines contain a combination of incline, decline, and flat bench exercises. Remember, however, that we're talking about shades of gray here. You can't recruit one part of a single muscle and leave the rest cold. Still, since there are two heads, it helps to hit the pecs from a variety of angles.

Note: Although you may not be a beginner, think about using the progression of beginner -> intermediate -> advanced schedules as something of a cycle. Start with the beginner layout, use it for 6 weeks (you decide the length of time judging by your progress), move on to the second schedule, etc.

If you're just getting started in bodybuilding, you should begin your chest training with these two exercises:

Always start with a lighter weight warmup for each exercise. Try to do at least 6 reps each set, and focus on progressive resistance. When you can do 10 reps with a given weight (even just for one set) increase the poundage. Simple. Stay within the 6-10 range, adding weight when you can get 10 on a set.

On the flat bench DB press, select a moderate weight that will let you do this exercise in a controlled manner with good form. Always keep your body flat, do not arch the back. Bring the bells to your sides next to your chest. Your elbows should be almost closed and your wrists should be facing inward at a 45-degree angle to your torso.

Now imagine that you're hugging a tree. Raise the dumbbells in an arc until they touch each other above your chest. As you move weights move upward, focus on the pectoral contractions that make this movement possible. Don't "push" the weight up, since this puts more emphasis on the back muscles. SQUEEZE your pecs together, and force the dumbbells into each other at the top to produce the greatest possible contraction. Then slowly lower the bells. Let your chest feel a full stretch, then repeat the movement. Note: When doing DB benches for pec development, not purely for strength, it can help to focus at times on the elbows and their movement. Think of the elbows as being connected to the pecs and acting as the motivators behind the movement as they straighten out. Don't think of pressing the bells, think more along the lines of a cable crossover and the contraction you can get with that movement. You should, with practice, be able to get the same strong contraction when you DB bench, if you want it bad enough.

Incline flyes can really work your upper chest. Set the bench at 30 degrees and no higher. Use dumbbells that are no more than a third of the bells you used for the flat bench press. Keep the arms in an almost fully extended position.

Arms almost locked out with the bells over your chest. Lower your arms slowly in an arc with your palms facing upward until your pecs feel a complete stretch. Don't be a goof here. Don't get all 'extreme' with the stretch position. Finally, contract your chest, bringing the dumbbells back to the starting position, keeping the arms almost locked out at all times.

Focus on your pecs. Try to get inside your chest by visualizing each muscle fiber contracting as you conquer the rep.

The second phase builds on the foundation by gradually adding volume and adding a decline movement:

The decline DB bench is similar to the flat version, but greater emphasis can be placed on the muscle fibers in the lower portion of your chest. Select a moderate weight. Begin with the bells at your sides by your chest, palms facing forward.. Contract the pecs, forcing the dumbbells up and rotating your palms until they are facing each other and the sides of the bells touch. Hold this position for a second as you force your pecs together as forcefully as possible. Imagine someone has put a finger between your pecs. Try to pinch his finger hard. Then slowly lower the dumbbells to the start position and repeat.

Here we add cable crossovers to the list and go to 4 sets on each exercise:

Crossovers can really seal the gains you make. Use a relatively light weight, and by this point in your chest workout your pecs should be pretty fried. Near-toast. Chest torch. Pectoral conflagration. Schmoked, Baby. Hear the lamentations of the lower fibers, Bro. Okay then. The goal now is to concentrate fully on isolating what's left of your pecs. Don't lean too far forward and start wussing out with added back involvement. Use a weight light enough to allow full pec contraction at the hands together point, which should be held for a moment. Or more. Slowly return to the starting position.

Overall, don't just try to lift the maximum weight on these schedules. They're designed to build a full set of pecs, not give you a big bench. Sure, add weight when appropriate but not at the expense of form, concentration and contraction. Use the best possible muscle-building technique, and in time you'll be handling some big weights in a different way. Remember, bodybuilding is not strength training is not bodybuilding in this case.