Big Thanks again to Jake Striefel for giving me access to this great material!


IronMan, Volume 33, No. 4 has an article on power rack training that I wrote after a period of time spent with Bill March down in York. I don't wish, at this point in time, to go into the various aspects of that mode of training, but rather, I'd like to call attention to photos of Henry Fera which accompany the piece. Henry and I shared a class in Italian II and a number of other interests. He played offensive guard at Tulsa in the mid-Sixties and came in 2nd or 3rd in the Senior Nationals in 1973.

In considering the various ways existing, that lead to the same point, his approach is proof positive that whatever works is correct.

First, I'll briefly mention that big Henry was of the school that one had to be well nourished. His mom owned one of the best and most successful Italian restaurants in the New York area and Henry often served as head waiter. He spent a great deal of this time downing vast quantities of shrimp, lobster, veal, chicken and steak in the back of the kitchen. He wasn't much on taking nutritional supplements, but he did insure that his caloric intake was sufficient to maintain his bodyweight of 285.

While at Tulsa, Henry enjoyed the company of others his size. Actually, at only 6' in height, he was one of the smaller linemen recruited by the Tulsa brain trust. Their philosophy was to get as many huge offensive linemen as possible, get them all benching close to 500, and let them protect a quarterback that could throw accurately up to 70 times per game. They would use short, quick linebackers behind a defensive front that went around six foot four and 275 pounds. They trained hard and ate hard (and occasionally attended classes). In order to insure adequate protein intake, even on nights when campus fare was less than edible, they would drink a gallon of milk each and then hit an all-you-can-eat place to the tune of eight or 10 pounds of food each.

In training the bench, Henry hit if four times a week. He felt that he could do this and grow if he didn't do too many sets (shades of Jim Williams), or too many reps, and got adequate rest and nutrition. He would go up to 500-550, in 4 or 5 sets of triples or doubles, do 2 or 3 sets of flyes, and then finish his bench work with Presses on the power rack. These varied from workout to workout, but he would, in the course of a week, do some from the top of his head to full extension, from a few inches below full lockout, from chin level, and from the full range position. These were also done for just a few sets and, as always, low reps and lots of weight.

He squatted, when we worked out together anyway, similarly. He squatted often, but again, low reps and lots of weight. Most of the fellows at that time would do low reps, but cover 8-12 sets in the process. Henry would get to maximum weights quickly and then cool out until the next session. This went on four days per week. Deadlifts were done only once a week and supplemented with lat pulldowns or rows, these done, as per the rest of it, every workout day.

Few assistance exercises were done. Once every 3 or 4 workouts, work would be done in the rack, shortening the range of motion to 3/4, 1/2, or 1/4 squats, depending on the weakness of the individual squatter (remember, we were doing pretty much full squats in competition in those days). These partials were done just as the full squats and the emphasis was on using a ton of weight (a half ton anyway. It wasn't that unusual to use 1100 to 1200 for the 1/4 squats.).

Of course, this would wreak havoc on the thoracic vertebrae for two or three days but every lifter probably runs around with Schmurl's nodes anyway (an upward and downward protrusion [pushing into] of a spinal disk's soft tissue into the bony tissue of the adjacent vertebrae).

In all movements, the same uniform was worn as one would wear in competition. This made for numerous delays in the training sessions, depending upon who was lifting, as some of the guys were into very heavy wrapping ("Don't mean to hold you up but I got this new double strength sheet I wanna check out.")  -- I was looking at a photo from a real old PLUSA mag this morning of a guy with 8 of the older style knee wraps on each leg training squats. It was part of a little pictorial essay on lifters doing the damnedest (maybe dumbest) things to get that weight up. This pic, online, was in there too:

A young Tony Fitton (1967) doing his best to deadlift a PR.
Okay then! 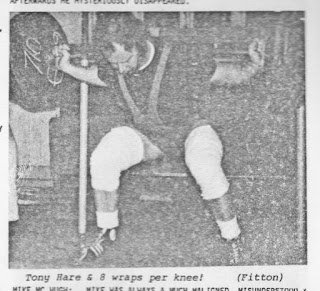 
Deadlifts were usually done once per week, in a similar fashion as the squats. Assistance was done immediately after the full deadlifts and consisted of  stiff legged deadlifts on a bench or block, getting a very full range of motion out of the erector spinae group, or partial deads in the rack, again utilizing those positions that were the primary weakness of the particular lifter. -- Not just the position he could handle the greatest weight in.

Benches were done 2 times per week, again, the same set and rep sequence as the squats. Assistance work at Zuver's centered upon dumbbell bench presses and dips. These were both done for triples, 4 to 8 sets. Bob Zuver built special racks which were angled so that the lifter did not have to clean the dumbbells to the shoulders. He would merely grasp them and roll back onto the bench. A partner would help the lifter sit upright an droll back into the rack, thus replacing the dumbbells. Considering that many of the lifters were using in excess of 150 pounders for this, cleaning the bells would have been very foolish. Dips were done on the big dip rack. A 12-foot monstrosity that had varying hand spacing. The dumbbell to be used as additional weight was located beneath the lifter upon a railroad flatcar. When ready to begin, he lifter would hook the weight onto the dip belt and go to it. Inclines, if they were done, were hit once per week.

A typical program for a lifter at Zuver's in the '60s would look something like this:

Monday -
Bench, as above
Dumbbell Bench (palms facing each other when doing these)
Dips
Squats, as above.

Wednesday -
Inclines, 6 to 8 sets of 3 reps
Deadlift, as above, deadlifts in rack, alternate weeks with
Stiff Legged Deadlifts as described above
Heavy Barbell Curls.

This contrasted well with Bill West's approach. Most of the guys that trained with Bill in his Culver City garage trained twice a week. Usually, it was bench and squat on Tuesdays and all three lifts on Saturdays, trying to total more and more each Saturday heading for each meet.

For those doing assistance work, inclines were sometimes done in place of benches on Tuesdays and especially for the legion of discus and shot men who dropped in, power cleans were also done on Tuesdays.

If partial deads from the rack were to be performed, these would often take the place of full deadlifts on Saturdays, but perhaps for only 1 or 2 weeks before full deads were done again. If the deadlift problem had not been alleviated it was back to the partials for a week or two, and then again the return to full deadlifts.

As far as I can remember no one went more than a few weeks without making their Saturday total. On occasion, lat pulldowns or the like were performed for a few sets, but this was always considered to be part of the accessory work and not even considered to be part of the "real" workout. So these accessories were just that. They in no way interfered with the business of benching (we did that first, remember?), squatting, and deadlifting heavy, heavy weights.

If a reminder need be given, West, Frenn, Thurber, Ingro (part of Zuver's team, but he trained at West's garage), Breaker, etc., Etc., ETC. were the main men of their day.

The simplicity of the approach should not be lost in light of the super swift, modern day so-called scientific perspectives of many armchair experts.

This game still comes down to taking a vary massive weight and moving it in one of three prescribed manners.

It really is that simple.

-- There's more to this article, a lot of it on Bill Starr and some of his training and training ideas, as well as many other things. Coming up.