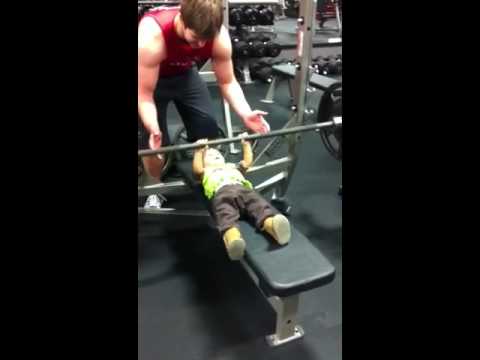 Sometimes I get ticked off that people forget just how important a big bench press really is. I mean, let's face facts. If more people bench pressed, the world would be a safer place and operate much more effectively.

Hunger in Africa? Easily remedied. Get everyone to do benches. What's a few stomach pangs when your bench goes over 300 pounds? Nuclear fallout? What about it? Who cares when you can double Four Big Ones. You think an H bomb would phase the Kaz? No Way!

Inflation, recession, mushrooming national debt, oversold stock market, birth control. sound of soul, shooting rockets to he moon, kids growing up too soon? Big deal. All of this is insignificant when you got a big bench.

People should open their eyes and look to history. Why was Lucifer a fallen angel? Man, the guy gave lousy liftoffs! When Moses brought down from the mountain the ten commandments the first one read, "Thou shalt have no other Gods before me, except Pat Casey." This original message was lost. Casey was dropped. Why was George Washington able to sneak across the Delaware and surprise the British? They were benching in the cold, trying to stay warm, that's why! I really get sick of these historical screwups. Another example. Why did Napoleon always have his hand inside his coat? Massaging a tight pec and resting a tender cuff following a tough bench workout the night before.

When all is said and done. bench pressing is easily far more important than your wife, family, kids, job, TV and even religion. Besides, having that big bench is Heaven anyway.

What about Roosevelt, Salk, Einstein, Kennedy, Ghandi, and Lincoln? A bunch of nothings with low benches (although Abe Lincoln benched 325 for a double and you have to admit he did have a long way to push the sucker). What about me, you ask (even if you didn't ask, I'm bringing it up)? Think about this. With only 20 years of training, I recently paused 557 in a meet (although I was allowed to have a Goodyear tire over my chest), and ya know what? I wasn't even nominated for the Nobel Peace Prize! Yes indeed, we are a nation with badly set up priorities!

The only way to remedy this national malady is to start now and GET YOUR BENCH UP. Perhaps I can help some of you vegetables out there who think your family of some such nonsense is more important than a Big Bennie.

How much does a big bench depend on genetics? In my opinion, not a whole lot. The squat and dead are certainly horses of different colors. Obtaining a big bench takes loads of time. People with good leverages can start squatting and in three years threaten world records. Good benchers have been at it for eons. As Dr. Hatfield says, "You don't build a house on sand, you need a good base."

Besides tendons and ligaments thicker that flies on a fresh . . . (let's see if they leave that in), you need relatively short arms and a long torso to be real successful in this lift. For this reason, you also would suck in the deadlift, although there are exceptions such as Bridges and Kazmaier. Of course, these two are exceptions, period. Having a long torso is the more important advantage. Why? The longer your torso the longer your pectoral mass from top to bottom. Casey, MacDonald, Moran, Williams, Ravenscroft . . . none were exceptional in the deadlift (this is not to say they didn't display more strength than their contemporaries who deadlifted more).

A misunderstood factor is the ability to put your upper body in a relative decline position. You can decline more than you can flat bench and bench more than you can incline and incline more than you can press overhead. Being in a decline shortens your work stroke. To get into a good decline you must be able to bring your scapula toward your butt. Forcing the shoulder blades in this direction provides a co-contraction of the scapular muscles and anatomically elevates the chest placing the pectoral muscles on stretch which causes those muscles to contract more forcibly.

[Once a raw lifter gets the hang of retracting the scapula properly on the bench he'll then with practice be able to use the lats to help get through the sticking point, something similar to the way the traps can be engaged to get through the tough spot in an overhead press.]

Once this position is assumed, the arms must stay retracted back into the shoulder sockets. This maintains the shortened work stroke and keeps the scapular muscles taut. I maintain that some of the top benchers now would bench even more if they worked on developing this position. Everyone can benefit from a bit of Lamar Gantism.

Another key for most individuals on their way to a big bench is learning to lift with the elbows directed outwards. This position stresses the pectorals because of angle of pull and they have a much greater potential for strength than the deltoids and/or triceps. Mike MacDonald, why by the way wears a medium t-shirt, is your classic pectoral bench presser. Most champions begin their lifts with the elbows slightly in and immediately move their arms into a position where the humerus is perpendicular to the line of the lateral chest wall. Bill Kazmaier is again an exception. An exception due, I believe, to the naturally strong deltoids he has. None of the 620 plus benchers has anything near his delt strength.

There are two things that will raise your bench numbers for sure. Benches and Eating. The best exercise for the bench press is the bench press. Nothing else is even close. Everyone's bench goes up when they gain weight. It always works in a stale period.

Most lifters like to train the bench press twice a week, going heavy once and medium once. This lies in the middle of guys like Jim Williams, who sometimes trained his bench heavy five times a week and Jon Cole, who I understand sometimes trained his bench once every seven days. The program I present here is one that I did every fifth day because that's how long it took me to fully recover between training sessions. So, you may have to rewrite the calendar along the way. This routine brought me from 520 to 560 in 12 weeks of training.

Remember, I benched every fifth day.

You will notice there are a lot of high reps here and not a lot of heavy low rep sets. This reflects the fact that I now masquerade as a bodybuilder, have always felt high reps with heavy weights were good for strength and never really had a desire to blow my pecs out.

Try it, it works.