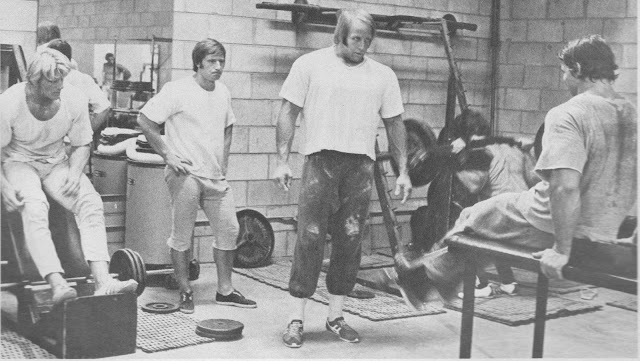 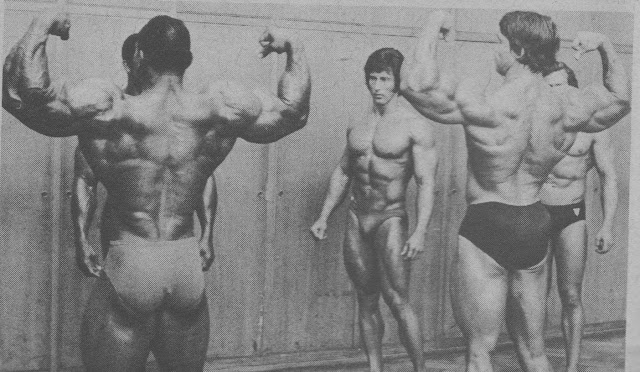 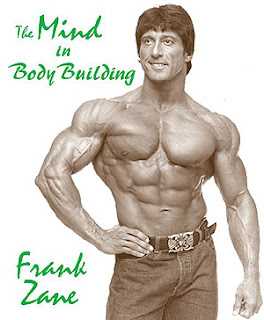 
A BODYBUILDER'S DESIGN FOR LIVING
by Frank Zane (1975)

It is becoming increasingly more popular these days to consider physical training an outlet for aggression. This prescription, like castor oil, makes exercise a kind of purgative, some way to rid the body of clogging, hostile emotions.

I have trained myself to work out with a positive attitude. I get a better muscle pump and can generate greater power. No energy is diverted to calm the "savage soul" in me.

I keep my attention centered in my body center of gravity. I'm aware of the movement and position of my body. Equilibrium prevails as instinct takes over.

Instinctive training can generate tremendous power. This power is called "ki" in the Aikido philosophy. by putting attention in this  moving-instinctive center known as "hara" a fusion of mind and body takes place.

The phenomenal power generated by the process is illustrated by practicing Aikidoists in a pet exercise known as the "unbendable arm":

- The student extends his arm forward, the fingers straight, the elbows slightly bent. He is then instructed to relax his muscles and to concentrate on a point beyond his extended fingertips, a wall, perhaps, or even a position beyond the wall. Someone will then try to bend his arm. If the student has grasped the idea of "mental extension" and does not resist muscularly, his arm will not bend.

This power becomes available because hostile thoughts and negative emotions were supplanted by an instinctive fusion of mind and body. You don't use exercise as a substitute for kicking your neighbor's dog or speeding ninety miles an hour on the highway. Bad moods distract and weaken you.

There is more to bodybuilding than sets, reps, and supplements. I have found that many people who take up bodybuilding are looking for some philosophy to help them make more sense out of life and themselves. However, they can get lost along the way. The carnate form, the body itself, becomes dominant. Like lost hikers they go around in circles in a directionless way consisting of dogged, dull bombing and blitzing at the gym, and stuffing themselves with protein. A full self-awareness is absent.

Ancient philosophies and teachings have handed down some information that demands a closer look. Much of it seems predicated on the idea of a three-centered awareness. These are:

- the head, or mental center
- the heart, or emotional center; and
- the hara, or physical center.

The head is concerned with thinking and logical reasoning the heart with feeling and emotion, and the hara, a Japanese name for the physical center of gravity situated about two inches below the navel, with body position and movement. The hara is also known as the moving-instinctive center because it instinctively knows how to control the carnate body.

How is one able to get each of these three centers to do its job properly? First off, the mind as an instrument must be programmed for thought. Anyone knows that it is impossible to think of two things at once, and how hard it is to think steadily of one thing for very long. Often, emotions manage to get in the way. They have a way of perforating your mental program card with venomous dislikes.

You are kidding yourself when you try to drive dislikes from your mind by hard physical training. The mind has to be cleared, and there's a way of doing it. First, the practice of self-observation becomes necessary. What are your likes and dislikes? Why are you angry? Who is to blame?

The biggest problem we have is that we think too highly of ourselves, and when something goes wrong, it is never our fault. We sit on the altar alongside our God and practice self-justification, when instead we should be kneeling, beseeching greater understanding.

Strive for greater mental control. Try sitting in a chair looking at your watch, thinking, "I am sitting here being aware of looking at my watch." See how long you can do this before your attention drifts to other thoughts. When you find your mind drifting after a few seconds, you can realize how badly you must track when you are attempting to do a set of concentration curls or focusing on driving the bar off your chest dynamically on the bench. We never really concentrate because what we are thinking of reminds us of something similar, and this in turn triggers a new thought, and so on and on. Psychologists call this the "flow of associations."

A common Yoga practice is to concentrate on a point between the eyes, and when the mind wanders, bring it back to attention. A fifteen minute session of this every morning will begin to teach you how to concentrate. Although an involuntary inner urging attempts to send you astray you can reject it by telling yourself, "I will succeed," or "I have unlimited ability." Many groups within Eastern cultures practice "chanting," the repetition of positive emotionally charged words over and over again powerful enough to replace useless associations. In this way the main thought prevails and the mind is locked on its objective. Thus, each task is accomplished fully, first one, then the nest. Completion reigns.

The second center is the heart, or emotional center. People take emotions for granted, often going from one negative state to another. Anger, hatred, resentment, jealousy, worry, fear and grief can drag you down. Negativity eats you away like dry rot. It also consumes energy that is deducted from your training efforts. Furthermore, when you express negative emotions you temporarily lose control over yourself, and it becomes easier for the same negative emotion to re-enter your weakened defenses.

Positive emotion means those feelings in the heart such as joy, love, truthfulness and courage. The body responds to them without resistance, and no energy is lost. In fact, an infusion of force results, and this always shows up as smooth progress in one's training efforts.

Try always to stay positive. Don't let anyone or anything bring you down. Don't become attached to things. Don't be ruled by objects. Search for true happiness which is a feeling that comes from within you.

According to Newton's Third Law of Motion, for every action there is an equal and opposite reaction. Although this is a physical law, it applies to you when you do something for others unselfishly. The dividend of this kind of action is pure bliss. The secret of high positive emotion lies in giving. As a teacher I get a singular thrill out of showing a novice bodybuilder a new twist in his training even though it means a break in my own intense workout. Giving of time is one of the greatest gifts.

The third center is hara, or physical center. Since the body is something we can see and touch, it is essential that we bring it under control. People judge us by our physical appearance because this is what we must first show them. The beginning of any communication you have with anyone, in many cases, depends on how they regard you physically. A perfectly developed and healthy body opens the door to fulfilling contact. Nor should age be of any consequence. With training as a lifelong habit be positively assured that as you get older, you get better.

As a physical culturist who has practiced many different forms of exercise, I continue to feel that weight training is the most effective means of exercise because not only does it build and tone muscle, but gives a comparable improvement to the circulatory system as well.

I will continue to train with weights because I feel bodybuilding is essential to the development of three centered awareness. My efforts to bring intellectual, emotional, and physical functions into balance have helped me to know myself a little better.

How well do you know yourself?