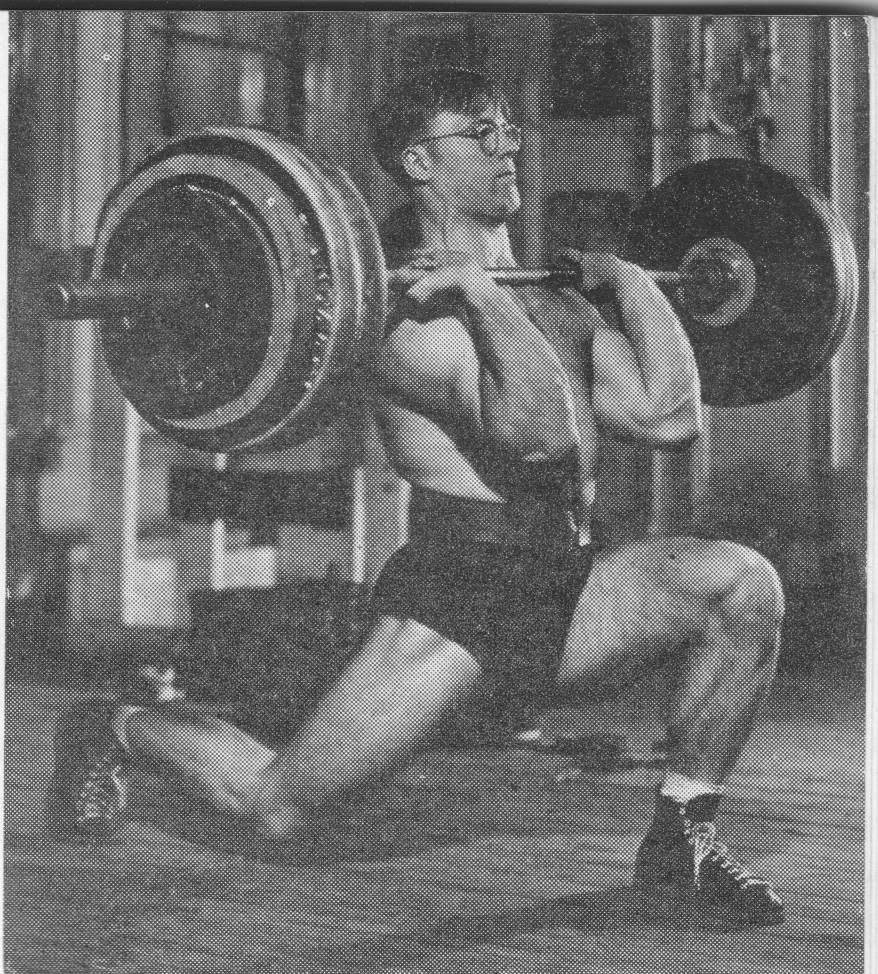 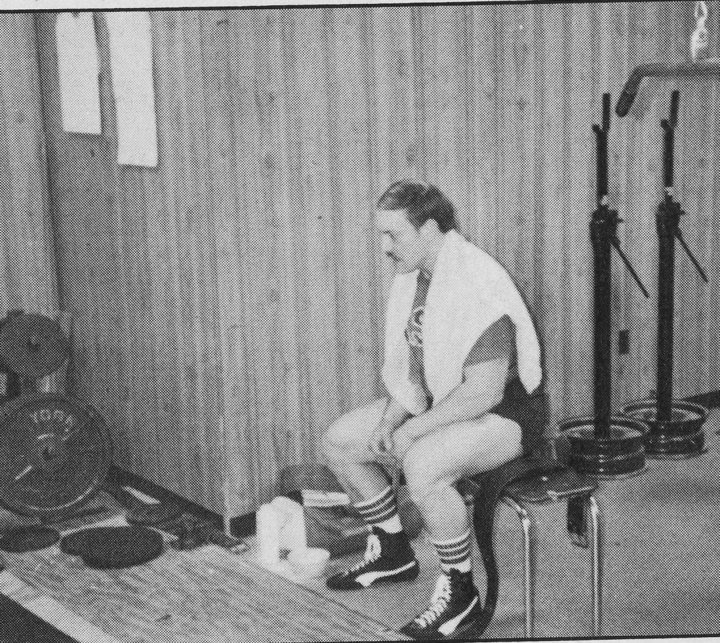 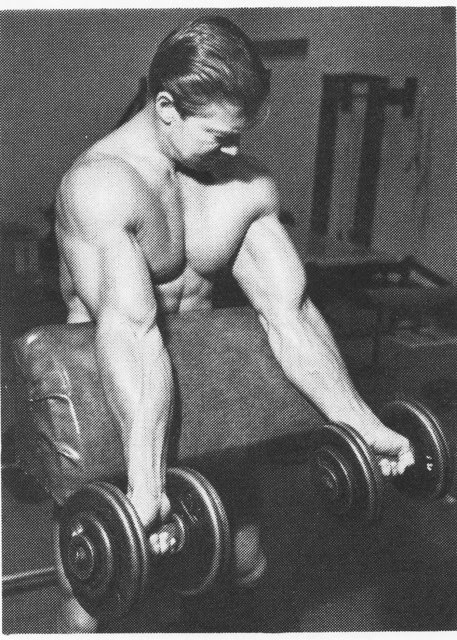 "I firmly believe the outcome of a lift is determined before the bar is touched," says three time Olympic medalist Pete George. No one will give Pete much of an argument on that, least of all, Philip Guenov, Bulgarian National Weightlifting coach. Guenov, in an exhaustive study of competitors' pre-pull antics, concluded that the difference between success and failure in an effort lies in the lifter's ability to concentrate intensely on the task before him.

Anyone who has seen Pete George lift can appreciate what we mean. Preparatory to an attempt he would pace back and forth behind the platform in a half-hypnotic state convincing himself that the bar was light . . . light . . . light -- for indeed if he truly believed a heavy poundage was light, then in reality, it was. The depth of his concentration determined how light he thought the bar to be, and consequently, how the effort fared.

Only recently have the mental aspects of lifting been studied more deeply. For years weight men have realized that "getting nervous" prior to an attempt was good if that nervousness could be harnessed in a way to create more power, explosion, and speed during the lift. But the nervous fortitude, itself, was produced -- or not produced -- automatically. Calm individuals remained relatively steady, lifting only within their bodies' normal capacities, not with controlled nervous tension and adrenaline aiding. Those tense by nature became too excited, lost coordination and reflex action, and failed lifts they might otherwise have made.

Now, Guenov's research may allow lifters to control the powers of their nervous energy, regulating it, allowing it to assist, never hinder, them.

Just as a valve determines the amount of pressure within a boiler, from "no steam" to the danger/breaking point, so does mental concentration dictate whether you will operate at peak efficiency or fail miserably. From Guenov's study of elite lifters, let's see how they, and you, can control the mental pressure valves which integrally influence lifting operations.


Lock Out Negatives and Lock in Success

Success with a limit poundage rides on scores of factors [obviously you can adapt and apply what you learn here to all your lifting and to all types of lifting], not the least of which are subconscious inhibitions, motivation, desire, state of competition, lifter's health, personal problems, etc. The overriding consideration, however, is that if the lifter concentrates intensely enough and successfully blots out all negative impulses, these failure factors are negated and a lift or set favorably negotiated.

Very few of Guenov's survey conclusions are absolute; all lifters will not benefit by following them exactly. Here we present general trends plus examples of leading lifters in action. After analyzing your own psychological makeup and motivation, and your many physical traits and characteristics, determine which conclusions to apply to yourself, and which you should follow, avoid, or reverse for optimum assistance.

Concentration being the key, let's explore it. Guenov, in his lecture at the International Coaches Clinic (Paris, Feb. 1964), divides concentration into two "time phases":

Of the two, 76% of all lifters studied spent more time steaming up for their attempts off the platform than on it (19.6% in the latter case). Instances of equal duration were a negligible 3.8%.

It is interesting to note the variations in mood and concentration time displayed by elite lifters. Yuri Vlasov, a confident, mechanically efficient athlete, is fully mobilized when he is called to lift. He strides energetically to the platform, immediately chalks up and gazes at the bar. He approaches it, squats, grips it, takes a breath, assumes his starting position and pulls. The entire operation averages under 30 seconds and less than 5 seconds is spent directly at the bar prior to pulling.

Compare this with 1960 Olympic bronze medalist Jim Bradford. A ponderous, collected individual, somewhat slow by nature, Bradford needs more time to gear up to peak form. His ritual consists of slowly chalking up, walking deliberately about the bar, sometimes standing and staring at the bar or ceiling . . . then he remains motionless for a long period save the vigorous action of his tongue and facial muscles (and voice) . . . eventually he pulls. His concentration takes a minute of more away from the bar, thirty seconds while at it.

In general, first attempts were shown to require less psyche up time than subsequent efforts, apparently because the lifters were more confident of success. An exception to this, however, occurred when the lifter missed his first attempt, then retook it without a poundage increase. Here his concentration time decreased. Probably because the initial effort's concentration carried through to the second attempt, the lifter being concerned only with eliminating the technical flaws which caused the missed lift.

In the more usual case of increasing poundages on second and third attempt most lifters spent considerably more time readying themselves as the chart below shows.


Poundage Increase/Concentration Time Differences (as compared with prior attempt)


Minaev vs Berger: A Battle of Mental Preparation

Self confidence and concentration are interwoven. Yevgeny Minaev, Guenov says, was not under excessive pressure from the Soviet team managers to beat his American opponent, Isaac Berger at the Rome Olympics. Berger had been conceded a featherweight first place finish by the experts judging from his awesome training lifts. Minaev was only to snare the silver medal. Self assured that he would have no trouble in this relatively minor endeavor, the Soviet world champion showed remarkable calmness . . . he was the only lifter to succeed with all nine attempts and his concentration periods for all attempts were of equal duration. His firing up was mechanical, stereotyped, regardless of the weight or state of the competition. Minaev went on to win the gold medal.

Berger, on the other hand,was overconfident. He paid no heed to psyching up before his first two snatches and failed both. Frightened now, he spent 80 seconds before his third effort and succeeded. None the wiser for his close call, Guenov adds, he concentrated for his 341 Clean and Jerk efforts only while at the bar -- not before. Berger's forces not being fully generated, he failed.

Minaev's static concentration period is an exception but the survey notes that the better lifters exhibit a lesser range of fluctuation in regard to these periods as compared to their less talented adversaries. That is to say that given several identical lift situations the superior lifter may concentrate on one 50 seconds (maximal) and on another 30 seconds (minimal) -- his fluctuation range is only 20 seconds. The poorer lifter may psyche up for 10 seconds on one (minimal) and 110 seconds on the one following (maximal) -- his range is 100 seconds. From this, one can conclude that experienced, highly trained lifters reach their optimum psyche up point more quickly than others, or perhaps they merely recognize it sooner. Concentrating for overly long periods of time results in real nervousness and the consequent loss of a lift needlessly.


Other Factors and Recommendations Involving Concentration

The lifter's physical condition will tend to affect his concentration. As an example, take the case of two Iron Curtain competitors, Vesselinov and Baroga. Both competed at the last Olympics while injured. It was noted that in all attempts and movements they used markedly shorter concentration spells than when they competed in a healthy state at the European Championships. Also, the better the contestant's training shape and form, the less he will concentrate on the lifts when in competition, the survey found.

Guenov recommends that mental preparation be stepped up in the following instances (relative to those instances in parentheses):

Lifters are cautioned not to address the bar or start pulling until they feel "ready." When not yet set, they should spend more time psyching up backstage and less on the platform.

Immediately before the lifter is called, he and his coaches should take care to see that no diversions or interruptions interfere with his mental preparation. More important, the athletes should habitually function in a predetermined manner to avoid all distracting outside influences and concentrate only on the best possible way to generate all the forces necessary for a success with the effort lying before them.

It is suggested that coaches try to reduce the psyche up periods of lifters for identical lifts, or lift situations, during training and in meets.

At the conclusion of Guenov's lecture he was questioned by many lifting devotees, several of whom asked what the athletes really thought about as they prepared to pull. He answered that most pondered the weight of the bar and the reasons they wanted to succeed with the attempt, i.e., personal glory, patriotism, for someone else, etc. All lifters appear to develop a true hate and contempt for the weight. Some have been known to spit on the bar after besting it.

While such steps as praying, uttering incantations, and the aforementioned expectorating are extreme, they show the measures some lifters will go to in an effort to mentally prepare their bodies and musculature for the great efforts our sport requires. Every lifter -- whether he be of calm, placid temperament like Stan Stancyzk or a fiery demoniacal competitor like Mahmoud Namdjou -- will benefit by letting his automatically produced nervous tensions work for him.

Properly applied concentration can change you from an also-ran to a high-grade performer faster than all the power training, isometrics and get-strong-quick schemes combined. Study the styles of elite lifters . . . see them in action if you can. Harness the mental lifting giant within you, much more powerful than any one muscle since it controls them all.

Your mind can help you to lift record poundages!