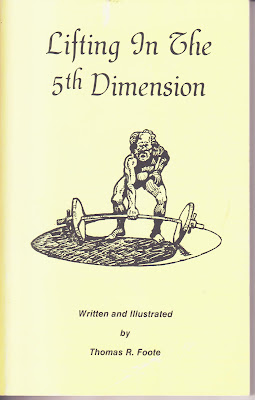 I chose the Clean to introduce 5tth Dimension lifting for several reasons. For one thing, a lot of people don't do Cleans regularly so they don't have as many preconceived ideas about them, as they do about other types of lifts. Next, the explosive nature of the Clean makes it an intense exercise which suits the general 'feel' I want to communicate to you. Last, but not least, I wanted to find an exercise that would mimic "real work." I wanted to be prepared to put in an active day of labor. For example, we heat our home with a wood-burning stove. after a day of collecting firewood, I hoped to avoid feeling as though a truck I had loaded the previous day had mysteriously driven over my body that night while I slept.

Naturally, I had to work my back, and isolated "bodybuilding" exercises were not the answer. I needed a coordinated exercise that would integrate the entire dorsal surface of my body. My need was functional and practical. In the private laboratory of my experience I worked on a solution. Enter the Clean. Because I worked in isolation, the extent to which my Clean resembles the exercise, as others know it, is a function of convergent evolution. That means it's an accident!

On one occasion I had some coaching. While I worked out one day, I noticed an older gentleman watching me. He must have been pretty big once. Taller than me, hair all white, arms and legs roped with muscle; he was still formidable. Without formality he offered some good advice.

"Get your hips in closer to the bar," he said.

"Never seen anyone doin' Cleans in here before," he continued. 'Used to do 'em myself, regular. Damn good exercise, but you got to get your hips in closer to the bar."

And I did. What the old sage said fit my own secret theoretical system. I knew it was important to use my center of gravity, though I wasn't sure how. The old man's feedback helped. That was the extent of any coaching I've received on Cleans.


The Problem of Scale

Done a relatively low poundages, the Clean is an unbeatable back exercise. It's great for warming up. In can be a gentle experience which brings an awareness of all your pulling muscles: the erectors of the lower back, gluteus maximus (which sounds like a Roman Emperor), the traps, the delts.

Once, in an introductory design class, we studied a problem of "scale". I constructed a cardboard free-form sculpture which was only a few inches high. Then I reproduced it several feet in size. It retained the same form but was a different experience. Doing Cleans I discovered a similar phenomenon:

by manipulating the weight, a quantitative variable, the exercise changes qualitatively.

Done at maximum poundages, the Clean makes new demands. Slap more plates on the bar. Pile them on until you stand before an iron Frankenstein, a monster of your own creation; that which could be your undoing. This is your maximum poundage, your personal best. It's a high wire act. The ego bites its nails into stubs. "You made this one before . . . but not always!" your memory chides. From somewhere an anxious voice reminds you that you aren't getting any younger and the time is approaching when all you will do is remember. This kind of advice you don't need!

The Clean requires more than strength at these upper limits. Concentration and coordination are equally important. The mind must cease its chatter and be cleared of everything except the infinite expectation of an impending explosion. During this single-minded focus, the WILL to lift is transmuted into the ACT of lifting, as lead was turned to gold by alchemists. Through some arcane sleight-of-hand, muscle and mind are mixed in a crucible of intensity. The Clean, because it is so well-suited for "singles" is especially amenable to this sort of iron magic. The Clean dramatizes the mind-body-connection so necessary for a focused lift.

The Clean is a blast of dynamite! You must drive the soles of your feet into the floor as you heave the bar in opposition. Actually, it is like a sequence of explosions mimicking Freeman Dyson's atomic bomb drive for space travel, erupting in a smooth lift. (Dyson quote: It is better to get mugged than to live a life of fear.) It goes like this:

Quadriceps fire and the great dorsal muscles of the back grab the effort. Like a baton, they pass it to the deltoids and trapezius muscles of the shoulder region; the bar's upward momentum is given a final boost from the calf muscles -- just before the knees dip, dropping your weight under the bar's vertical vector -- then you straighten triumphantly with the bar at shoulder height.

The Clean is still more. There is a mystery of the Meta-Clean, the Clean of Power. "Meta" is used here to mean to go Beyond, to TRANSCEND, to GO HIGHER. The Meta-Clean is the first such higher exercise you will meet. These meta-exercises take normal movements to a higher level of development within the 5th Dimension,where the mind and body are fused into an even greater force than the sum of the two acting separately. In that moment of fusion and self-abandonment, when you are completely immersed in the experience of "exertion", the familiar limits of physics and psychology change. This is a Moment-of-Power; and like the vortex of a black hole it distorts time/space and the observer. The Moment of Power is the gateway to the 5th Dimension. It is during that moment that the glue which binds our minds into rigid patterns becomes loose and the fibers of ordinary reality stretch to let us through. To squeeze through into the 5th Dimension, you will need to learn several skills. First, you must learn to enter the Moment of Power, which you will learn in Chapter 2. You will need to learn about your Center and how to use it. This information is contained in Chapter 3. The next major element concerns control. You must learn to focus and direct the power that you will discover flows through you. This control is the subject of Chapter 4.

Now, just for fun, here is something interesting that I've noticed. Time has always been of of the "givens" of my normal environment which puzzled me. I couldn't see it. I couldn't touch it. Yet everyone relied on "it". As a kid, I would sit there in school agonizing over the last few minutes of the day, watching the hands of the big clock haltingly advance. Just were, I would wonder, was the stuff this clock measured.

Years later I stumbled on the well worn "fish/water" allegory. It seems this little fish was swimming about in a vast sea. He was very curious and asked a lot of clever questions, but there was one thing that continued to stump the little fellow. The older fish all spoke casually about something called "water". Not only was this elusive substance supposed to be everywhere, but it was said to be essential for life! Well, he looked everywhere for "water". He searched under every rock and behind every blade of seaweed to no avail. Rumor has it he's still looking. Have you ever tried to find time?

Once I asked my brother about "time". As a physicist, I figured he could tell me what it was the mystic priests of sub-atomic science figured into equations to represent it. He spoiled my day by suggesting that there were two kinds of "time". One was the mathematical constant, and the other was private experience.

If you are practicing the techniques of 5th Dimension lifting your attention is focused; you are no longer sub-vocally chattering to yourself, and you will cease to experience a body "inhabited" by a mind. In this state, pausing over the barbell, you may ambush time. This is a moment like no other, when time's interval no longer flows equally. The space between points A and B is not the same as that between B and C. This is a moment so full, so weighty that it may seem to last forever. You create a time warp; and it seems that, as you manipulate the amount of weight, you control the warp. It's a simple equation. As you increase the weight, you increase the warp.

This reminds me a lot of what's called the Uncertainty Principle in physics. Basically, this rule states that you can never pin down both the location and velocity of a given electron. You can get one or the other -- but not both, since the act of determining one changes the other. As an observer the scientist reacts with his own experiment. So what? Well, this means you can't be a passive observer of the Universe. "Truth" depends upon your participation. I'm saying that time doesn't passively flow around you. You participate in time. Time is something you do.

I think it's outstanding that weight lifting, which looks so simple to an outsider, can lead to topics like time warps. As you discover the 5th Dimension you will discover how infinitely fascinating our moment-by-moment experience can be. Our awareness of time is just one such wonder.