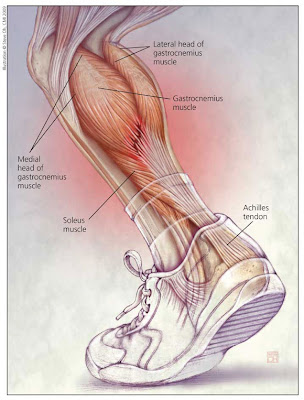 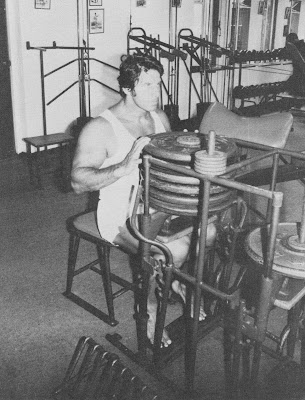 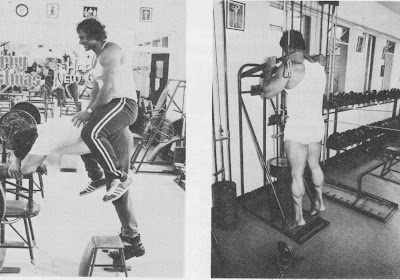 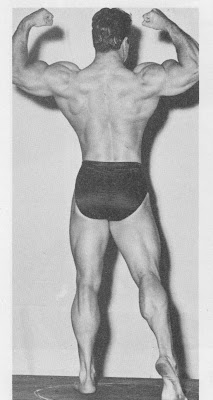 
You may recall that in my previous articles on arm development I mentioned that two factors other than direct exercise influenced ultimate size development of the arms. These were bodyweight and the actual length of the upper arm. Similarly, the ultimate development of the calves are also determined by two main factors. Once again, bodyweight is of the utmost importance and the other factor is the flexibility of the Achilles tendon.

There are those fortunate ones who are blessed with either natural calves or arms, and even with a loss of bodyweight these people lose less on their natural areas than do their less fortunate brothers. By and large, however, if you tend to be light in the calves you must accept the fact that even with all the sets possible you will gain little or no size on them unless you also have a marked increase in bodyweight.

The question of a flexible Achilles tendon is what primarily determines the shape and size of your calves. You will note that bodybuilders with a good stretch in the Achilles tendon, such as Steve Reeves, have a natural, large lower calf development. A good test to ascertain whether or not your tendons are tight or flexible is to stand in a shallow lunge position and, keeping the heel of the front foot on the floor, bend your knee and stretch it as far past the toes of your foot as possible. These bodybuilders with the greater flexion have naturally larger and lower calves -- the soleus tending to blend in with the gastrocnemius -- whereas even those advanced bodybuilders who lack flexibility in the Achilles tendon, whilst they may possess a heavy gastrocnemius development, are usually very poor in the soleus group and this gives their calf development a 'high' look in appearance.

I have seen many bodybuilders make very marked improvements in their calf development, the most notable being Clarence Ross. If you've ever seen photographs of Clarence when he won the 1945 Mr. America weighing 168 lbs. and noticed his calf development (or should I say lack of it), and then looked at later photos when he weighed 205, the improvement in his calf development and shape is astonishing. As a point of interest, Ross performed several sets of heavy standing calf raises, followed by several sets of heel raises without any weight where the emphasis was on slow, full-range movement and improvement.

Other bodybuilders attempting to stretch the Achilles tendon do so by walking up a steep incline board normally used for midsection exercise, taking small steps and endeavoring to keep the heels on the board as long as possible.

I am sure that all the readers are versed in the different calf exercises, but let me just list the more popular ones:

Many authorities advocate different foot positions (toes pointing in, forward, and out) in order to work the calf from different angles, but I do not believe this is a necessary. I simply exercise the calves with the feet comfortably apart and parallel to each other.

In addition, I try to take most of the stress on the base of the big toe and on exercises 2, 3 and 4 I find it more beneficial if I do the movements with knees slightly bent, as this works not only both heads of the gastrocnemius but the soleus as well.

How often and how many sets? They should certainly be exercised no less than three times a week. You can, if you wish, work with them daily and another system is to work the calves 4 days in a row and then rest them the 3 days following. I believe in a minimum of 5 sets and a maximum of 15 sets per workout, with the repetitions ranging from 15-20.

You may experience days when after 4 or 5 sets your calves feel 'pumped' to maximum. When this happens I see little or no point in continuing further sets. Similarly, you may also have days when after 4 or 5 sets you have no response or pump whatsoever. In this case I cease all further sets and usually the next workout I experience a good pump again.

Remember, if you desire more size on your calves, unless you are already overweight and/or not exercising them nearly enough, the only way that you will increase your calf size apart from regular exercise is to increase your bodyweight.