How Much Can You Bent Press, Part Two - Siegmund Klein 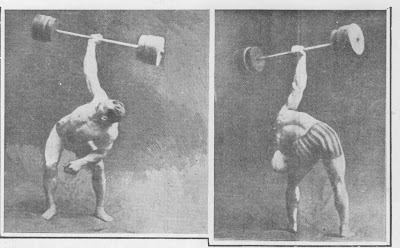 Arthur Saxon, the greatest of them all, having achieved a record of 371 pounds in the Bent Press. These pictures show the Great Saxon, well down in the press. He would not hold the weight a moment longer than necessary at the hip, then press as rapidly as he could while perfectly controlling the bell. Instead of using a twist or screw style as employed by some, he bent well around before starting the press and then went straight forward. 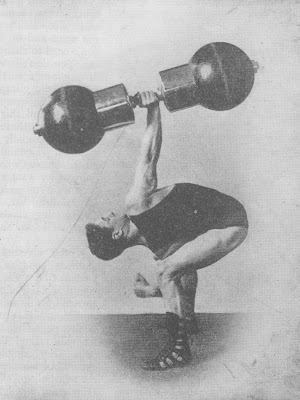 Pierre Gasnier, the great little strong man of France, showing the low position of the Bent Press, when the arm has been straightened. Some good pressers rest the non-lifting hand and arm upon the knee on the same side. But the majority prefer to thrust the shoulder of the non-lifting arm well down between the knees and rest the hand on the opposite leg. This style permits lowering the body at least six inches farther and makes it easier to consummate a heavy press. From this position the lifter goes into a full squat, the same position as the low point of a one hand snatch, then, balancing the weight, raises to the erect position. The heels are then brought in line, the bell controlled for at least two seconds and a perfect Bent Press has been made. 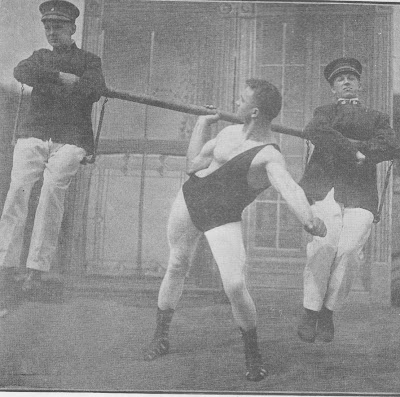 Antone Matysek, formerly one of the world's strongest and best built men. Now a member of the Baltimore police department and physical instructor of that organization. This picture taken during a professional performance shows the position of the Bent Press as the athlete prepares to press it aloft. You will notice that here the bar is held almost parallel with the shoulders, the elbow rests near the hip and well back, the leg on the lifting side is perpendicular and in line with the forearm. Thus a column of bone supports the heavy bell and the weight is not difficult to hold.

How Much Can You Bent Press, Part Two
Siegmund Klein (1936)


Before going into the intricacies of the Bent Press movement proper, let me briefly outline and remind you what I said in the first part of my article.
http://ditillo2.blogspot.com/2012/03/how-much-can-you-bent-press-part-one.html

I believe I made it clear that form and position should be practiced to perfection before attempting to elevate heavy weights. The old adage that "practice makes perfect" is a good one, but there is also a grave amount of untruth in this. for instance, if you have started on the Bent Press using the wrong style you may get to elevate a fairly heavy weight with this faulty style, for the simple reason that practice has perfected your errors.

But the man who learns the correct method first will eventually elevate much more weight.

I suggest you return to the first part of this article showing Bob Hoffman in various stages of the Bent Press, as I will occasionally refer to it as I go along.

Now, to continue, you have grasped the bar in the center with both hands, the lighting hand placed in the proper position, the other laid over the top merely to facilitate pulling in to the shoulder. The elbow is comfortably placed on the hip and well back, then the feet must be brought into proper position, which as I said was a matter for the individual to determine.

I place a great deal of stress on keeping the leg on the same side as the pressing arm straight and perpendicular, so there is a rigid support from the floor all the way up to the weight. You will notice this particularly in Hoffman's second position shown in the previous article, and in Matysek and Saxon shown in this article.

All this movement in pulling the weight from the floor to getting it set in proper position on the hip should be performed as quickly as possible and the pressing started, for as Saxon said, "the strength of one's arm begins to wane the second a weight is at the shoulder."

Now the elbow is lifted back and the hip thrust as can be seen in the same mentioned photographs, the toes of the opposite foot are pointed outward in the direction the body is about to travel.

Always keeping the eyes on the bell, steadily lean forwards and sideways still keeping the elbow on the hip. Most novices make their mistake at this point, they want to suddenly press the weight away from the hip, when, theoretically, there should be no pressing other than the arm lock. For it actually is possible for a man to be so limber in the waist and flexible in the thighs that he could lean forwards and sideways until the arm was fully extended, but the elbow still on hip.

However, you should start pressing about the time your upper body is about right angles to the legs, as can best be seen in the third and fourth poses of Bob Hoffman and the second position of Saxon.

Keep the forearm perpendicular and carry the weight a bit back as you keep pushing against the bar. Now the arm is beginning to straighten out, and it is here the lifter must press with all his power. The arm is almost three-quarters straight now and the leg, which has been kept straight up to this point, will now commence to bend at the knee.

Continue to bend both knees, while exerting pressure against the bar, the arm gradually straightening. As the arm reaches the reaches the "locked" point, you should be in a position similar to photos four and five of Bob Hoffman, or the very low position of Gasnier.

Here again the novice will make a mistake by trying to arise immediately from this position. When the thighs are horizontal, you drop the hips to the full squat position, bringing the weight back carefully so the body is more directly under it, and the pressure distributed on both feet.

The other hand plays an important part in supporting the upper body by resting the shoulder against the upper thigh or knee and the hand on the opposite leg. But now it must come to assistance in pressing against the leg to come to the upright position.

There are a few fundamental points that should always be uppermost in the lifter's mind; and that is always keep your eyes on the weight, and above all the forearm must be perpendicular during all stages of the lift.

The heavier the weight the longer duration the elbow will remain on the hip. But here is another thing -- a man with a very large arm will not be able to make his elbow touch his hips as he starts leaning and twisting, as in the case of Bob Hoffman and Saxon, because the muscles above the elbow are so large, but you will observe the whole upper arm is resting on the side or rather the latissimus muscle, which gives greater support.

In looking over the great masters of the Bent Press, Saxon stands out supreme. His record of 371 will probably never be broken. Here is what Saxon says about bending in the lift: "In allowing the body to fall forward, the speed of the movement must at all times be governed by the balance you feel you have attained." Of course it is best to get the lift over as quickly as possible, but a fair speed in pressing may be obtained only when it is felt that a perfect balance has been gained, otherwise to hurry it will only cause the lifter to lose control and the weight to fall.

Another point brought out by Saxon was that he did not allow the bar to swing while he was pressing. Always start with the bar parallel to the back and not at right angles. (Notice Matysek's position).

Remember the scientific principle behind the Bent Press is to keep the bar at the same level and bend the body away from underneath it.

In gaining a good balance of the bar it is best to always keep it level; this will take a lot of strain away from the wrist that you would feel if there was too much back hang or front hang, although some performers actually allow the bar to have a slight back hang.

Those who have practiced this lift gain terrific bodily strength, for the bent press really does give one great body strength. Gasnier had terrific body strength, although he was only a lightweight his ability to break steel chains was indeed remarkable. The dumbbell he is shown pressing weighed 236 pounds. Although no man has ever raised double-bodyweight in the Bent Press some have been very close to it. For instance, Pullum at about 125 pounds raised 238. Prof. Attila could press double his weight into the lowered position but could not stand erect with it.

I really believe that if you practice this lift as I said in the first part of this article you will gain the greatest enjoyment of your lifting career and become an ardent devotee of the most scientific and fascinating lift of them all.