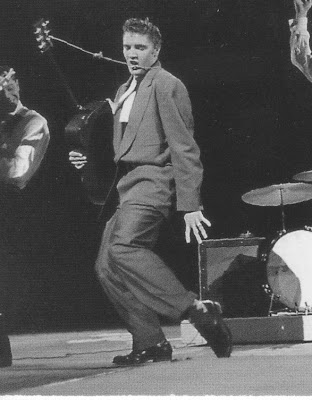 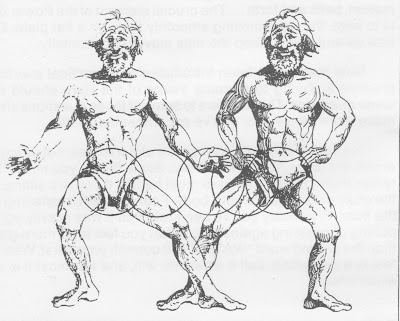 
"This is your Hara," he said, placing his hands over his lower abdomen. "It is your center of gravity. It is also the CENTER OF YOUR BEING!" the roshi continued.

You might think that at this point I would have freaked out, but that's not the way it was. The guy looked so harmless that it was entirely natural just to stand there and wonder why you hadn't noticed your own Hara sooner.

"You will learn," he said, "to think from within the Hara. It will become the center of your consciousness."

He went on like that and I just accepted it as though he was describing the weather. Somehow it made just as much sense to me that consciousness could be located in the stomach as in the head.

Furthermore, the instructor started to demonstrate what he was talking about. Anybody with an intact nervous system could see that he knew something we didn't. I remember how he stood there like a heron on one leg and invited me to push him over. He didn't budge! It was like pressing against a huge tree rooted in bedrock. There he was, balanced on one foot, and I couldn't sway him. Later he would do other things which my 15-year old brain seemed willing to accept -- like throw me across the room and land be with precision -- without touching me.

Like I said, he knew something I didn't and he was trying to teach me what "it" was.

Standing loosely, he held out one arm at shoulder height and asked me to push against it. Naturally I bunched up my 15-year old shoulders, puffed up my narrow chest and PUSHED! He relaxed his arm and I plunged forward onto the mat.

"Now," he said, "keep your arms straight, but push with your hips."

This required that I take a fairly wide stance, flex my knees slightly, and "push" by rocking smoothly forward with my hips. This time, when he relaxed his arm, I stood my ground. It was my first practical use of this thing called the Hara. In addition to being a more stable way to move, initiating the push from the Hara was more powerful!

In Aikido class we often began our sessions with a gliding exercise. Gently we became familiar with our center and learned to move from this strong posture. Eventually we would learn to initiate action from the Hara.

Take a look at the picture of Path Finder doing the Glide. With both feet firmly planted, he simply shifts his center of balance (the area enclosed by the circle). His weight is transferred first from one leg and then to the other, in a rocking motion, back and forth. The crucial element of the Power Glide is to keep the Hara moving smoothly through a flat plain. Don't bob up and down. Keep the hips moving horizontally.

Now that you've been introduced to a practical exercise -- practice it. Trying to become aware of the Hara should raise some questions. Some things you must FEEL, rather than THINK. The Hara must be felt! If you are sitting, feel the chair press against your body. Feel your feet interfacing with the floor. Previously you've been told it was gravity you felt pulling or pressing against you. What you feel is no more gravity than the printed word "WATER" will quench your thirst. What you feel is a sensation, call it what you will, and foremost it is pure experience.

Now stand up. Feel the sensation on the soles of your feet. Let the sensation map out each toe, the ball of the foot, the arch and tghe heel. Spread your feet to shoulder width and flex the knees slightly.

As you assume the stance the first thing you'll notice will be the tightening of the muscles of your inner thigh. If you have any discomfort in your knees it should go away with practice. This is a gentle exercise but you may require some warmup. Don't push it. If you feel any discomfort in your lower back it is probably an indication that your posture is incorrect. Were you leaning forward? Was your back straight? The back should be straight, shoulders back, and hips thrust forward slightly. When you get it right, it will feel right. Now try it again. Let your arms hang loosely at your sides. Again imagine the hips drawing a straight line as you move without bobbing up and down.

For all this verbal hocus-pocus,
the Hara is not an intellectual concept.
It is not an abstraction.
You will not become aware of the Hara by thinking about it.
You must feel it, and
there are many, many ways to find this feeling.

It is very physical and concrete, but it represents a different way of relating to the world. That's usually what happens when you borrow from another world.