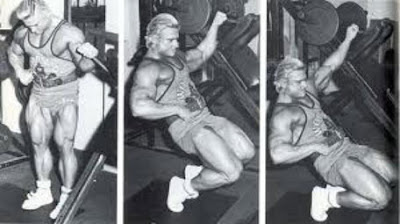 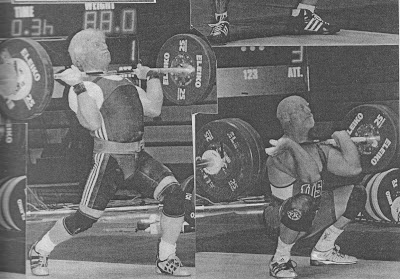 The last newsletter had an interesting article by Don McCauley. I was particularly drawn to the discourse about the holes in many lifters' development. The essence of these thoughts seems to be the lack of a lifter's ability to sense the more subtle aspects of position and timing when executing a lift. Alexeev once talked about the need to have a feel for the barbell, a rapport with the apparatus. Apparently he was talking about the ability to sense during a lift where the weight is in relation to one's body.

Joe Mills would say that you can't think and lift at the same time. Often there is a disconnect between cognitive lifting knowledge and efficient technical performance. You can't think your way through a lift. Your body has to know how to lift!

Yes, before anything happens a lifter must have a good idea of how to perform the lift. He may even become an expert at this by watching countless videos, absorbing technical treatises on correct performances and studying kinesiological papers. But for lifting potential to be maximized the body must be taught to lift with the greatest possible efficiency.

In order to train the body to lift efficiently we must learn to be in our bodies as opposed to being in our heads. This is a kind of mental discipline. It entails developing a sense of how our bodies move. It means learning rhythmic movements and the subtleties of balance and synchronized movements. Many activities can facilitate the development of these qualities. Track and field events, gymnastics, team sports and many forms of dancing are a few that come to mind. The idea is to try to get a sense of what your body is doing during these activities.

The trick is to try to bring as much awareness as possible into the body movements, try to feel all the shifts in body direction, feel how your body responds to an opponent's moves in team sports, feel how your body moves to a beat when dancing, feel the balance shift during gymnastic exercises.

Believe it or not participating in activities such as those suggested above can bring a tremendous amount of skills to the training experience. The value of this type of background activity is that it may enable the beginning lifter to learn technique more quickly and thoroughly. Because lifters will learn to sense subtleties in body movement they will more easily be able to sense and correct flaws that creep into their technique.

What is the best way to impart these skills into the training program itself? The idea here is to develop training programs that have a correct balance of light, medium and heavy weights. Most coaches will agree that light weights are best for learning technique. If a lifter spends too little time mastering light weights there is a risk of bad habits developing if heavier weights are used.

With a heavier weight new variables appear. The ratio of the lifter's bodyweight to the weight of the barbell change. In a manner of speaking, the lifter must learn to lift a heavier weight. A lifter with a good athletic background and disciplined training with lighter weights has the best chance of mastering heavier weights with consistent technique. Although a lifter must learn to lift heavier and heavier weights, an overexposure to heavy weights brings an increased risk of repeated failures which can disturb established technical patterns, reduce confidence and thereby retard progress (and here I was, thinking all this 'type of stuff' only applies to Olympic weightlifting).

Excuse the tangential excursion here, but Don's views helped me to see some of the foibles in my own lifting career. I was certainly a lifter with more than a few developmental holes. Since I was thirteen I trained alone. I tried to learn technique from sequence photos in the books and magazines. Five years later, as a middleweight, I officially did 240--315 under the burden of many technical flaws. Late I began to lift for the Central Falls Weightlifting Club and unlearned some bad habits.

However, I never developed the feeling for the barbell that was needed for consistent performances. When I missed a weight, particularly in the Snatch, I often had no idea why. In retrospect, I am convinced that I was not enough in my body to sense what I was doing wrong and how to correct it. I could mentally assimilate coaching advice but I had trouble translating these concepts into improved technical efficiency.