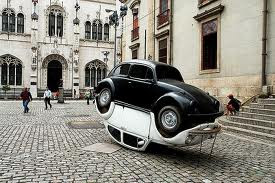 "What was that Hara-stuff you mentioned back there," inquired The Kid. He hoped if he could get Path Finder talking, he might ease the pace.

"For starters," Path Finder called over his shoulder, "where does it feel like you inhabit your body?"

"Well, let's see," The Kid stalled as he warmed to the task. "My feet hurt at the moment."

"Right up there behind your eyes, I suppose," said Path Finder.

The old guide seemed willing to let the conversation die a natural death and became more concerned about their path. The surrounding terrain was becoming even more broken. The tumbled boulders lay all about them. The two continued to wind their way among the growing piles of stone in silence.

The Kid was comfortable with the lack of conversation. At first he just chewed the idea of "inhabiting his body." He wondered what Path Finder would have answered to the question, since he implied that he didn't just live in his head. Slowly, he became aware of his surroundings and lost interest in philosophizing. The piles of boulders were getting really weird. Huge rocks were balanced crazily in columns of varying heights. Some were quite tall and precarious. In fact, the whole landscape was dominated by giant towers of stacked boulders. Here and there the ground was littered with piles of smashed and jumbled rock, which seemed to attest to the probable life cycle of these formations. It was while scrambling over one of these tumbled rock heaps that Path Finder elected to break the silence.

Pausing, the old guide asked him, "Ever wonder what makes things fall?"

"And you know all about gravity, I suppose?" continued Path Finder.

"I know it's a law," The Kid said with confidence. "Where I come from any school kid knows that stuff."

"Ah, but this is the 5th Dimension" Path Finder reminded him, "and it's not where you come from."

"So what?" he said a little defensively.

"Well," said Path Finder pointing to a particularly tall column composed from square faceted stones and topped by a massive round boulder, "what would you say if I said these were sculptures?"

"I'd say you need to get out of the sun," replied The Kid. "These are a natural phenomenon. They're probably the result of erosion of something like that."

"They're natural alright," said Path Finder. "These are the product of Gravity and I wouldn't mention Erosion around him if I were you."

"Him?" The Kid said, shaking his head with an exaggerated display of doubt.

Just then their trail led around the base of one huge tower to reveal a sight which froze The Kid in midstride.

"Yup,' said Path Finder, as he calmly pointed at the gargantuan figure who dominated their path - "HIM!"

Looming before the travelers was a giant! Not just a giant, but a giant hefting a Volkswagen sized boulder. The great bearded figure, whose arms and legs rivaled the trunks of oak trees, was in the process of "sculpting." That is, the mammoth artist was deftly adding another huge stone to the growing tower.

For a brief moment The Kid had the fleeting impression of a big child totally absorbed, playing with his building blocks. But, just at that moment the great shaggy visage lifted from its concentration and held him riveted with a gaze. Abruptly, the giant dropped the boulder. Among the towering sculptures the crash of the huge stone echoed like cannon fire. The giant strode toward them. The Kid's blood froze like January ice. Desperately he turned to his guide for help. The old man just stood there calmly, his whiskery face split by a broad grin.

In a deep, slow voice which rolled like thunder the giant spoke.

"Old friend," the giant hailed, "what have you brought me?"

Intensely relieved, The Kid saw that the giant was smiling too.

"Gravity," the guide proceeded with introductions. "I'd like you to meet my new traveling partner."

The still shaken Kid extended his right hand which Gravity gravely accepted in a giantish handshake.

"And Kid," continued Path Finder with the formalities, "I'd like you to meet Gravity, our training partner.

Gravity is another one of those pervasive elements of our daily experience which we rely upon, but take for granted. What makes a barbell heavy, anyway? Further, the more plates you slap on the bar, the "heavier" it gets. There is something fundamental going on here which itches for attention. What is this stuff that makes your feet stick to the ground, rocks fall, stomach sag and big hunks of iron smash your toes? When you fully realize that there would be no point to weight lifting without resistance, then it becomes obvious that gravity should concern lifters a lot.

We are immersed in something vital to our interests, which we can't see. What we can do is FEEL gravity. Actually, what we feel is resistance as we interact with our external environment. Gravity enters into our lives as an explanation for the resistance that we feel. And I'll guarantee something -- most folks don't have even a vague idea of what gravity is.


The Law & The Force

First, let's explore the more obvious (objective) Western version of gravity. From my daughter's junior high school science book I learned the following: 'Gravitation is a force which causes all things to be attracted toward the Earth's center." This might have been called the Big Magnet Theory.

This Law of Gravity seems to say that gravity is a force, an attractive force, which gets stronger the more stuff you have doing the pulling. Next, the further apart the two things are, the weaker the strength of the pull between them.

Back in 17th Century Europe this "Law" was hot stuff. Since then at least one other model has proven more useful. For some reason our school system decided my daughter was too young to hear about Einstein.

I guess I can understand the junior high school teacher's position that Einstein was a weird guy. This quiet kid would sit around pondering a lantern and wonder whether or not the light would be visible if he could travel as fast as it did. He probably isn't the sort of person you'd want your children studying. At about the age of 25 Einstein went ahead and described how gravity might work without resorting to the use of mysterious "forces."

Einstein came up with a cleaner model and called it "relativity". When I was a kid by big brother explained it to me like this.

"Look, stupid!" he said, flattering me. "There's no force pulling things down. Different amounts of matter have differing degrees of mass. See?"

"Yeah, sure!" I said quickly, afraid he'd otherwise keep the big secret to himself.

At this point he paused for theatrical effect, ". . . It BENDS it!"

While my brain was reeling under the prospect of imagining "bent space" he went on.

"Next," he said, "the space around a big planet is warped more than the space around a dirt clod. So, when an object passes through this warped space, its course bends, so that it appears to be drawn toward the center of the mass. Right!?"

"Right!" I said. He was much bigger than me and tended to twist my arm when I needed persuasion.

About 25 years later when I researched this chapter, I read:

I encountered that description with a strong sense of deja vu.

Now we've explored two Western notions of what makes weights feel heavy. They either emanate an invisible force or warp the space-time which surrounds them. If both of these options sound wild, that's good. I'd like you to loosen your grip a bit on some of the more familiar thoughts that we pretty much take for granted on a day-to-day basis. Background assumptions about what makes our world tick can all be lumped into something called our "world view." Perhaps the most interesting thing about a world view is that you don't generally know you have one. But it's there, none the less, working all day providing you with a general blueprint of reality.

There are lots of examples of world views which have been scrapped because they couldn't keep up with the demands made on them by changing times. For example, the Earth used to be flat and was trucked around the Universe on the back of a giant turtle. Good ideas like that had to give way, but you can bet your sweet barbell that such ideas didn't die easily.

There's a good reason for going into this world view stuff. You will need a proper sense of perspective before you can enter the 5th Dimension. You also need to realize that there have been many other views of the way things work and that, even now, there exists around this dirt ball called Earth many models of reality. Stranger yet, in some way they are all valid.

Earlier on I mentioned lessons learned from Aikido, a Japanese martial art. The first lesson will be to turn your vision inward rather than outward. You will need to look inside yourself at your private or subjective experience. Western culture doesn't train us to do this very well, so don't be surprised if it seems a bit strange at first.

Let me tell you how I encountered "Subject Gravity." When I was 15, my father and I decided to study an unusual martial art named Aikido. I'm not sure what we expected. We'd heard rumors that it was "different." This strange difference was largely attributed to the instructor, who was purported to be a man of unusual capabilities. So we were curious. It's also significant that at 15 I was uniquely impressionable. While I tended to reject everything my parents believed largely as a matter of teenage, I was very open to new ideas. In fact, I don't think I had experienced enough life to begin thinking critically. Instead, I just welcomed new ideas hand-over-fist, with a kind of thirst I would later learn to outgrow.

Our first night at the dojo - the school - was bizarre. Imagine this commonplace scene. My dad and I drove to the edge of town where an old military barracks had been relocated near the highway. In this austere World War II relic, several men gathered, all dressed in what looked to me like white pajamas. These men were "regular folks" who led otherwise respectable and predictable lives.

At some cue they all assembled on the big canvas mat which filled most of the floor space and bowed toward the wall where a framed portrait of some old gentleman hung.

Outside, on the bypass, cars roared as they carried other people to fulfill thoroughly comprehensible patterns. Inside we were preparing to enter the Twilight Zone. Before the assembled men in pajamas, the roshi (our teacher) took a comfortable stance. He looked most unremarkable. The man facing us was shorter than me, which afforded a good view of his balding head. Smiling around and under horn-rim glasses he presented an altogether affable appearance. And he was fat too. So there was this short, fat, balding man in glasses - wearing white pajamas. This was not a cunning figure whose words would inspire doubt in the listener's ear. On the contrary, this "roshi" looked so essentially normal that I was completely unprepared for what followed. Remember, I was expecting stuff about punches, blocks and kicks . . .