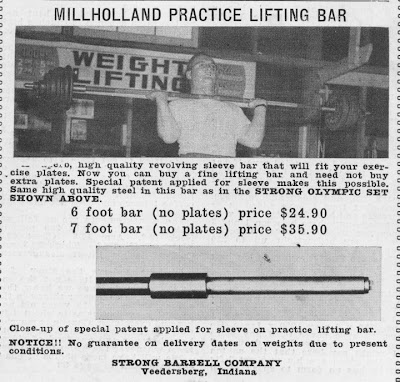 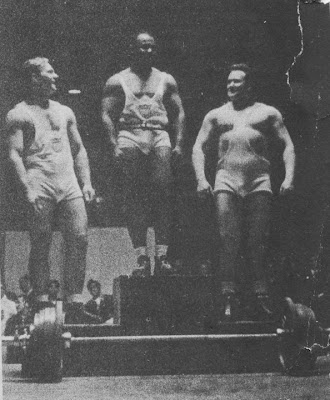 The Chest Shaping Squat, Part One
by J.C. Hise and Thomas Bruno (1946)


When Thomas Bruno and J.C. Hise first spoke of their new find in breathing methods, we asked them to write it up for Iron Man. When the manuscript arrived we found it to be very similar to a method we had been using for some time. In fact we had a similar method written up in our new course. We know that this method will give great results. We are glad to be able to present it to our readers that they might make the progress they are entitled to. Most of you are acquainted with Mr. Hise. Mr. Bruno is one of the instructors at the Eells Health Studio. He has done and is doing much experimenting and research in body building. He will share the results of this work with readers in future issues.


The present period is once again most fruitful in production of new and better and more successful methods of exercising. This is likely because many of the best artists are in the studio business and some of them are very observing of new things. This Chest Shaping Squat is not entirely new, for like all good exercises it has been used here and there, but not properly recognized and identified, and therefore singled out for public consumption. It has been adequately recognized and identified by Roger G. Eells for over five years and ENFORCED on all of his studio pupils. It is just impossible for Eells to waste any of his life writing about it and there is no chance that he will be less busy in the future. It has failed to become widely disseminated for the exercising classes most gullible for it were distracted from it by the Selective Boards for Foreign Beachheads. I will not deal any further with its past history and usage. It is just too humiliating for practically every expert artist in the country. I’m thinking of my honor, not theirs!!!

Thomas Bruno comes from Dalzell, Illinois, and like many discriminating men, prefers Rogue River Valley, Oregon, where he lived for many years, and most likely will again. When Bruno contacted me, he was working 12 hours a night plus nice long auto rides dodging traffic to and from work. He was enjoying 30 to 40 exercises on exercise days, a fine brisk run every day plus his happy session of ping-pong. He often had three or four hours a day to waste sleeping. Since I was merely falling over desert cliffs and considered such much too hard – I hope you can imagine how ill this made me. Tom believed I might know of some way to take up his spare time. I understood that occasional experts find patients like this are very common – but like other experts my observation has been mostly among the inferior types of men.

I wrote him the shortest notice I ever wrote – pointing out rudely that he was my candidate for “one most likely to fail in exercise”. It is no joke to paragraph train a human buzz saw. As a rule they react readily to the same medicine handed out for the more delicate. Bruno had previously wrenched his back on the job and those of you who know, can imagine what a mess it is to levy squats by mail on some male who needs the straight-legged deadlift exercise on the hopper, which he no have, or might need absolute rest from a damaged sacroiliac. One advantage a studio artist- not one of those worthless and diligent shekel shakers – has over paragraphers is that he can read a student at once while watching him exercise. He does not have to write a complete encyclopedia to every exerciser, who, as always, picks out the type he wants, instead of the one that fits. Such an artist can adjust the exercise to fit the customer in the gym. A good artist can tell at once when his man is overloaded, but he cannot do it by remote slow control. I levied on Tom six or eight exercises – which I was sure he would refuse to reduce to – assuring him that I knew he would never give up his “pleasures” for this negligible stuff. I promptly forgot him – but in a few days I received a letter from the alarmed Bruno who wondered if he had been injured at work or if he had an attack of rheumatism, for his collarbones were aching on both ends, his ribs ached where they joined in the sternum and where they attached to the spine and his chest felt like it was going to burst through his ribs with aching. There was no place he could have read this – ye experts have often talked of this – but none of us had ever printed such a complete description of “The Maximum Growing Feeling Effects”, described by one praised as most likely to fail in exercise. Thomas then rated the “Encyclopedia of the Art”.

Bruno is 5 feet 5½ inches tall, and then weighed 130 pounds. Some years before he had gained from 120 pounds to 130 from Mark Berry, but had had a long vacation from the neighborhood of weights. With his bad back he soon gained towards 170 pounds. Victory effort ended and he was unaware of whether to retire to the Oregon Forest or further sample The Art. I pointed out my most conservative opinion of Roger G. Eells (which is identical with my most radical, public and private opinion of the same) and he went to Columbus. After some weeks of reshaping his chest on the Eells style mouth breathing costal squat, he commenced to instruct in the studio. He halted his chest at 44 inches and weight of around 160 pounds. Everyone not living among the blanket warhoops knows why.

Bruno is one of those chaps who can do as much exercise as anyone else, but as soon as it goes over a certain very limited amount – it no longer is useful exercise. All artists are very suspicious of those who dish out multiple magic motions as tho performance of the same is a figure of merit like scooping so many tons of coal is to the Payroll Pilferers. When Bruno hit the ripe “surges” during his exercise periods (oneseldom makes rich gains over more than four weeks at a stretch) and expanded his exercise program – a common disease to all of us – it never went over 17 to 20 exercises – varying from one to four sets of squats of 20 reps. No one that I know who knows exercise is likely to do more but possibly Paschall, who always did more than anyone else he knew of. At this time Bruno would read his exercise feelings perfectly and knew exactly when exercise ended and work began. To those who advocate more, think on it!

Therefore anyone who goes over six or eight exercises on a bodybuilding program is either unfolding into his growing surge, or he is innocent of the right program, or he is too inexperienced, regardless of the millions of exercises he has done or will do, to know what the exercise score is.

Whey you read of multiple-multitudinous-muscular exercises – even all good ones that work readily on other artists if they take two weeks to two months to perform them – that are ordered to be performed in a short time on one exercise day, remember, some men can do all that “work”, but very few will find that it is exercise for them in promoting growth. How much less is this true for persons who may be lacking in both toughness and ability to grow readily. A few men are culturally incompetent to instruct in gyms because they have money in their hearts instead of blood in their veins. Ambitious artists in the studios never suffer from pauperism.

Bruno kicked me out to perform for our dear public. He pointed out as a fact of life that one 240-pounder is always acknowledged as knowing several times as much as a 160-pounder, while this is not necessarily true. It is an over-acknowledged fact and I had to bow to it. When I dived back into the squat, I found that I had moved up into the Eells energy class, if the grub held out. His explanation of the Eells mouth costal breathing squat was as good as in Vim (we can now all laugh at this joke – I will interpret it so that WE all understand it). I invented a combination breathing style costally which I will not explain, for it is inferior to the orthodox Eells, but it reshaped my chest almost instantly. Eells style would have been even more rapid. Bruno properly squawked at my being unable to understand plain anatomy (no one else did either) and then (gulp) I remembered seeing it in occasional places. I used the Chest Shaping Squat under ideal conditions. I was overworked, underfed, overpacked, staggering over cliffs and through snowdrifts. On my combination costal, my chest reshaped at once, the arch rising high and full, during which short time I had bronchitis from carbon monoxide poisoning, 10 frostbit toes and two frostbit heels, a mild attack of pneumonia because of my being too delicate to do say 32 good exercises in two hours.

Everything was ideal. Something new had been added to the squat. I had to sample it.

“Abdominal breathing will not give results excepting in bodyweight gains. Chest gains will be no more than that which can be expected from ordinary squats. The bodyweight increase will be greater in abdominal breathing squats than in with the regular squat and for that reason is the better method, but why look for a zircon when a diamond lays before you? When practicing the breathing squat, do it in the manner that assures you of all its benefits. That is, breathe costally and not abdominally. When you breathe do it in such a manner that your chest will rise and fall, not your abdomen. This stretching, concussion effect on the ribs loosens the cartilage attachments of the sternum and results in greater flexibility of the entire region. It gives you a greater expansion as it were. Your job then is to carry yourself erect. In addition, incorporate the pullover.”

This my brethren, is the exact anatomical explanation of the Mouth Breathing Costal Style for Mighty Squatters and Innocents Abroad. If anyone ever converted this precise outline into exercise, he is absolutely unknown. Everyone, just like me, considered mouth breathing costally as painting the ceiling by substituting levitation as more efficient than ladders and springboards. Eells departed into the studio where he taught it to thousands, by pantomime and not, those ethical words that he left to you and me.