The Art of the Press - Bob Hoffman 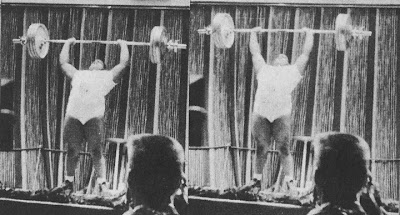 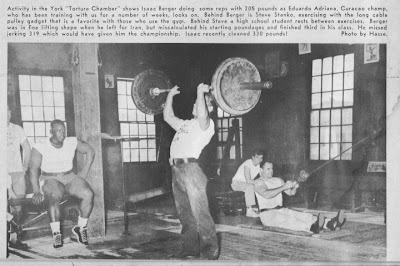 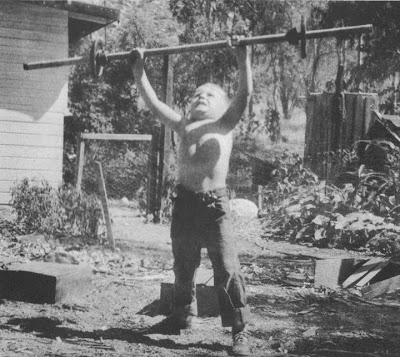 The Personal Record:
It never gets old.

The Art of Weightlifting – The Press
by Bob Hoffman (1958)


Many lifters are performing bench press exercises to improve their pressing ability for weightlifting. Although I do believe that any form of pressing is helpful, the bench press position is so much different from that of the standing press that it has little advantage, especially for the smaller lifter whose bodyweight is at the limit of his class. The bench press is a fine pectoral developer but the pectorals are used very little in overhead lifting. If a man is huge, like Anderson or Hepburn, and weight doesn’t matter, it is another good exercise which will build the pressing muscles from a different angle. But if a man is small like Charles Vinci, bench pressing will develop muscles which will not help much in overhead lifting and will increase the bodyweight so that it becomes more difficult for the lifter to make weight. I often said to Vinci, who won the first Gold Medal at Melbourne, “Chuck, if you had two pounds less pectorals, you could add two pounds somewhere else on your body which would make you an even greater lifter.” Chuck totaled 755 at Melbourne.

If you insist on doing the bench press to improve your overheads, be sure that you do not practice with the very wide grip. With this style of pressing men like George Eiferman, who have very large pectorals, only have a few inches to press. This exercise does little to aid in improving the overhead press. Instead, press with the hands about the same distance apart as in overhead pressing, forcing the elbows toward each other as the weight goes up. You will get a good range of movement using this style and it will have some beneficial effect in building your pressing ability.

It’s too bad that Jim Bradford of Washington, D.C. is not sufficiently interested to go all out in his training. I have believed for a long time that he could score well over 1100 total and could have given Paul Anderson some stiff competition. The last time I saw Jim in training I formed the opinion that no one in the world has deltoids as large as his. Less than a year ago Bradford weighed 280 and his deltoids looked like large coconuts. At that bodyweight he had no appreciable waistline, yet he had a tremendously powerful body. At the world championships in Milan (1951), Jim won second place. He was second at the Olympic Games in Helsinki in 1952. In Vienna (1954), when John Davis had an injured leg, we sent for Jim and he came over just a few hours before the lifting and totaled 1045 for a second place medal. Schemansky won that year with 1074. The following year Jim went to Munich with the U.S. team and finished second to Paul Anderson. Then came Olympic year and though Jim was in top form, he did not try out for a berth on the team.

A good share of his time is spent practicing a form of push-pressing that has brought him good results in pressing and has helped all other members of the 12th St. Y team which is known as the Bradford Weightlifting Club. Jim and his training mates press “without sin”. They hold their positions erectly, press smoothly and seldom are disqualified. There are comparatively few pressers in this country who press in the same strict style as do members of the Bradford Club.

From the inception of Jim’s lifting career, iron game enthusiasts all over the world have been impressed with his superlative pressing power. His slow, wide grip, power pressing, while maintaining perfect body position, brings oohs and ahs and much worthy applause from lifting fans everywhere. Jim doesn’t follow the norms when it comes to pressing style, yet he still lifts incredible poundages. If the jovial Goliath had the time and desire to train seriously he could become the world’s heavyweight champion.

Now, concerning repetitions in training the press. The greatest pressers use varying methods. Stan Stanczyk has used the old method of 5-4-3-2-1. Tommy Kono, who is the best formula presser ever, performs 3 reps per set. During the years of ’54 and ’55, Tommy was pressing up to 275x3 on his heavy days. He could do 7 or 8 sets with this poundage! At Melbourne in Pre-Olympic training Tommy made 3 reps with 285 several times.

John Davis, winner of eight world titles, developed the practice in his later competitive years of doing presses with heavy weights in sets of 2 reps. He would press 300 one day for 10 sets, then gradually move up doing doubles with as much weight as 340. He reached this height in Copenhagen before the 1954 World Championships in Vienna.

Back in 1942, Davis lifting as a heavyweight for the first time, WEIGHING ONLY 200, officially pressed 322(!) in winning the National title at the Arena in Philadelphia. This lift would give John a formula rating of 218.63, the world’s highest at that time. So what Davis did and does in pressing is important to all lifters seeking to improve their press. Training in York before the championships of 1940, he did a great deal of forward raising with barbell and dumbbells. at that distant date he would practice this exercise with up to 165 on the bar. I have always thought that this exercise helped not only his press but also gave him added snatching power. In 1941 he snatched 317 and ten years later 330.

The sitting press has played an important part in the pressing performance of many successful lifters. It’s not possible to use he legs or lean back in proper sitting pressing. This exercise is practiced in the regular pressing position and also in pressing behind neck.

Chuck Vinci and Isaac Berger are phenomenal pressers. By practicing only single attempts in the press Berger got higher numbers than any lifter I had ever known in his bodyweight class. He reached 240 in January of 1956. On the other hand, Vinci practiced many repetition push-presses. Chuck’s presses always worried me. He would back-bend with even a moderate weight, mostly because his presses were too far front. Reason being his pectorals were too large. After several months of refraining from pectoral developing exercises his pressing straightened out wonderfully.

Steve Stanko pressed much as Tommy Kono presses, using a fairly narrow grip for a big fellow. He and John Grimek have always used heavy dumbbells in their press training. This has contributed greatly to their superlative pressing ability.

During the time Grimek and I made a trip around the country in 19490, he would continental press 330 pounds nearly every day. Although he practiced pressing with a barbell earlier, most of his training now is done with heavy dumbbells. He did a great deal of forward raising with these heavy dumbbells, both alternately and together. He also performed many side raises.