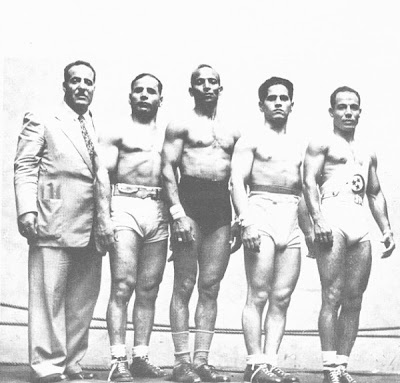 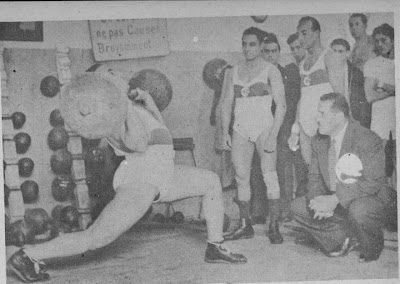 El Geissa, the Egyptian heavyweight champion, seen here being instructed by Nosseir on how to use the Camel style of splitting. 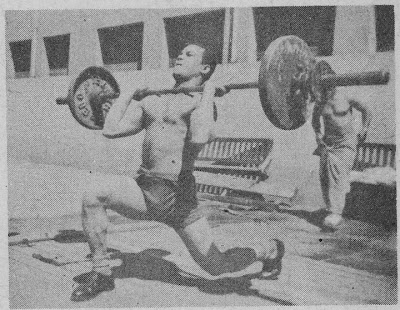 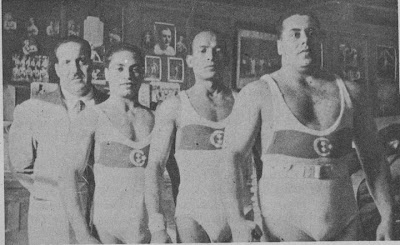 The Camel System of Training
by El Sayed Mohammed Nosseir (1948)

It is a great honor to be associated with readers of this magazine and anyone who is a weight-lifting enthusiast; it will be a pleasure to express myself through these pages and I will do my best to offer some valuable information about the Iron Game, and also (since I have been told it would be interesting) some information about myself. My system and ideas of training are not the result of snap-judgment, they are based on experience and observation over a period of 20 years. During this period of continuous effort I competed in several International and Olympic championships and gained various titles. I gained World’s records which I held until my nephew, Geissa, who trained according to my system, succeeded in beating my records. Geissa competed in Paris, in October of 1946, in the World’s Championships, and took third place in the heavyweight class with a total of 870¾ pounds.

Now I want to tell you about the Camel System. In October, 1931, I visited London and gave a display of weight-lifting t the Sporting Club. I lifted Two Hands Clean & Jerk, 352 pounds. They were astonished and asked me to explain my style and system of training.

We consider the camel, in Eastern countries, as the strongest animal. A camel can rise with a weight of 3300 pounds and the movements of this animal set me to thinking, and eventually influenced my ideas. My style of lifting before 1925 was what is known as the squat style. I did not move my legs either to the side or forward. I was very enthusiastic about lifting and it was my custom to spend my school holiday in our village, where I studied the camel and his movements when rising with a burden. First, he stands on his rear legs, swings his head up and down with his long neck, extends one leg in front as much as possible and leans on it to complete his standing position.

1.) get set and grasp the bar with the hook grip if your normal overhand grip is not strong.
2.) pull the bar quickly using the thigh muscles as much as possible until the bar reaches the dead-point.
3.) drop under the bar by stepping forward with one foot (either right or left); the other foot must go backwards; swing the head backwards and turn the wrists with the bar on the chest. These three movements must be done simultaneously and quickly in order to succeed in the Two Hands Clean with maximum weights.


Notice that the front leg must form a right angle with the foot and must go forward – by 20 or 25 inches, depending on the height of the lifter. The upper body and head must lean to the back – this distributes the weight of the bar on both legs and on the lower part of the back, thereby enabling the lifter to stand erect with ease.

If we compare the Two Hands Clean, as explained in number 3, and the second movement of the camel, we find that it is the same.

Some of my friends in America criticize this style, saying that the front leg travels too far forward and thus places so much weight on the rear leg that there is danger of a strain. They claim that this is what gradually put Touni, the great world’s champion, out of commission. That is just not so. In 1938, Touni was in Vienna to compete in the World Championships. At this time he received an injury to his left leg, on the inside muscle of the thigh. He had a hot vapor bath and without doing any training after this for a few days attempted a Two Hands Clean of 330 pounds. His rear leg split too far and he fell. That is actually what happened to Touni. On the other hand, the French lifters are accustomed to step back – pulling back as they lift the weight. This movement places much of the weight on the rear leg and is potentially dangerous for injuries to the muscle on the inner side of the thigh.

I noticed in Paris that the style of Stanczyk is nearly like that of the Egyptians. He seems to have the bodyweight best suited to his height and structure, and if he remains at this weight I am sure he will be the holder of many world’s records.

I have condensed the story of the Camel system which we Egyptian weightlifters use. I hope that lifting enthusiasts of all nations see the logic of this, my idea, founded on the observation of one of nature’s strongest beings – the Camel.

"Nossier also described to me a new method of weightlifting he developed which he called the “Camel Method.” He explained that a camel, when seated, is usually on its knees. In this position, the heaviest loads could be placed on him and once loaded, the camel would stand by using a certain body position. First, the camel’s back legs would straighten up and when its back was completely up, it would then straighten out its front legs, thereby allowing a heavy load to be lifted and carried. By observing the camel, El Saeed Nossier got the idea that to “snatch” or “clean” a weight to the shoulder, the best way to do it was to bend down completely to the lowest level, like the camel, then as he lifts the weight upward, he lunges forward with one foot and thereby continues the movement of lifting the weight up and overhead in one complete uninterrupted motion. He would then stand up, again, like the camel, and control the weight in place over his head. Nossier found so much success using this system that he also applied it to cleaning the weight to the shoulders for the military press with equally good results."