The ABC’s of Weightlifting, Part One by Tommy Kono 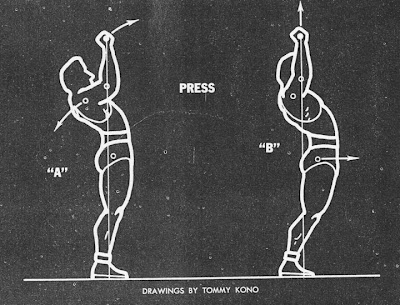 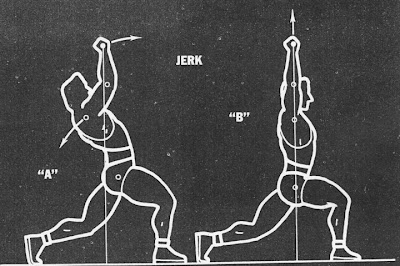 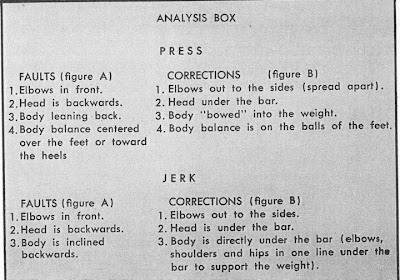 The ABC’s of Weightlifting, Part One
by Tommy Kono (1969)


In reading instructional materials, most readers wish to apply the ideas they read to their training immediately. If the material covered in the article cannot be used in training right away then it is usually shelved until such time as it can be used. In many instances the subject covered is forgotten until it is reread later on.

Keeping this in mind, I have come up with some practical material that can be used in training right now. Some of it may seem very basic, yet they are the most common mistakes made in both training and competition and can be corrected quite easily.

In this short article I shall explain two of the most common errors made in lifting and how to correct them by using the proper approach in practice. Both errors are related to each other in some respect because both are made when the weight is overhead and the wrong action is made in either pushing the bar overhead or in supporting the weight overhead.

How often have you seen a lift that is almost complete fail in the last two to four inches of arm extension because the weight seemed to be just a little out front? How many times have you witnessed a lifter actually have the barbell at arms’ length only to see it fall back immediately to the sternum?

Study the drawings accompanying this article. Note all the differences between drawings “A” and drawings “B”, before reading the text that goes with the drawings. Try to analyze the mistakes and how they were corrected. After you have studied the four drawings thoroughly, refer to the analysis adjoining the sketches and compare your ideas with the points listed in the analysis box. Read the detailed explanations that follow so you have a complete knowledge of the actions that take place.


Detailed Explanation of the Correct and Incorrect Methods

In figures “A” the lifter has attempted to lean away from the bar in order to extend the arms. In so doing the bar, elbows, shoulders and hips have deviated from a straight line, (viewing the lifter from the side). More effort to lock the arms would push the bar out front and to compensate this action the shoulders would move further backwards or away from the gravitational line of the bar. The bar will follow the least line of resistance, which in this case would be out to the front, making the lift impossible to finish.

Correct Method for the Press:
For the Press, the strongest body position to fight the weight when the bar reaches the sticking point is when the shoulders and head are directly under the bar. This position is attained by keeping the various arm and shoulder joints in one straight line (again viewing from the side) and by attempting to “wedge” the body into the lift. One of the most important points to remember is to try to keep your balance on the balls of your feet until the lift is almost completed. Another important point to remember is to get your elbows out to the sides as quickly as possible. When you attain the “B” position in the Press and the bar refuses to go higher because of its heaviness, you can then sink lower under the weight by bowing your body more, causing the arms to go beyond the “sticking point”.

Correct Method for the Jerk:
Here again the various joints of the arms and shoulders should be in one straight line with the head directly under the bar as well as the hip joint. Since the legs are much stronger than the arms it stands to reason that the lower appendages should take on the greater load. If, in kicking the weight up for the Jerk, you do not get sufficient height to lock your arms out, then your legs should “give” while in the split position so you can lower your body until the arms do lock out. Supporting a weight at locked arms and with the spine in a straight line with the arms, the “kick down” of the bar or the shock is then absorbed by flexion of the knees.