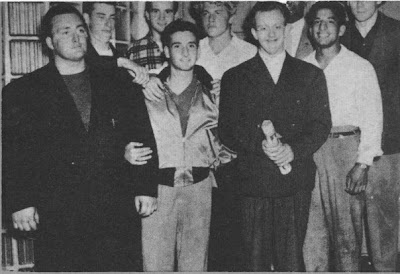 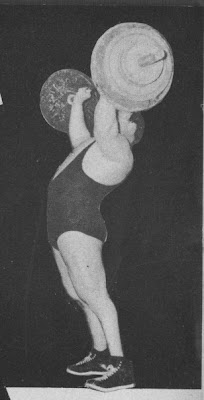 The Press and Basic Body Power
by Doug Hepburn / Charles A. Smith (1951)

The advent of a new and great strength star has caused a sensation in the weightlifting world. Beyond any doubt, Douglas Hepburn bids fair to become the strongest man of all time, for his feats of power . . . sheer body power . . . leave one with the feeling that the impossible has been accomplished each time he takes a workout; so fantastic is the caliber of the lifts and poundages he tosses around.

I well remember the first letter I had from Doug. So terrific were the lifts quoted in it, that we absolutely refused to believe what he told us. “No man is that powerful,” I remember saying to myself. Eventually I met Doug and he at last began to get the recognition he deserved. As the correspondence from him in my possession reveals, he came here to stay for the purpose of personal instruction from me. During the month he lived with me and my family I had ample time to study him, observe his actions to certain things . . . his habits and personality. Doug and I conducted conversations about various aspects that were hours in length. The notes I took filled five scrapbooks; the grasp he has of the fundamentals of Olympic lifting and its basic concepts leads me to believe that once he specializes on the quick lifts, he will in all probability set records that will still be on the books a long time from now.

Immediately after the Senior National Championships had taken place, our office was flooded with letters asking about the new world’s record holder. They wanted to know how he trained. What his development was like . . . how he compared with other outstanding lifters. Doug had impressed these correspondents tremendously. In his first competition he had broken a world record on an extra attempt and had compiled a total that would have “placed” him in the World’s Championships. His press record of 345½ pounds was well within his power, for he experiences difficulty in cleaning a weight, having no style to speak of in the snatch and the clean & jerk. But he can press anything up to 385 if you put it into his shoulders or let him take it off the squat racks.

It is my belief and general policy that knowledge is USELESS unless it is shared by all. If you know what makes a man such a superlative lifter, then it is your duty to spread that knowledge around instead of keeping it to yourself. It is with great pride that I present here the training views of Doug Hepburn, how he trains for the press. This article was written after extensive correspondence with Doug and is set forth here practically in his own words, as told to me in his many letters.

“From the first day I started training,” wrote Doug, “I have always been interested in feats of shoulder strength and the various ways in which you could press a weight overhead. At that time, I little realized I had the potentialities that would enable me to raise world’s record poundages, and it is my belief that today there are thousands of young fellows who are capable of pressing far beyond what they imagine their limits to be . . . and this they will do if they conform to the training methods I have followed.”

“Like all tyros,” went on Doug, “I thought there were ‘secret’ methods that would enable me to take a shortcut to strength. I found out that the only strength secret is . . . HARD WORK. Fortunately for me, I stumbled blindly into the right path and used a series of exercises that strengthened my body in every way . . . I soon found out that Basic Body Power is one of the main reasons for a man’s pressing power. The hips, thighs and lower back are just as important as the muscles of the shoulders and arms. So far as I am concerned, I can quit working entirely on the press and concentrate solely on leg and back exercises, and my press will suffer but little. By using squats and deadlifts I can maintain my pressing power.”

“Now this may seem strange, Charlie,” Doug continued, “but all through weightlifting history you will find the strongest men have practiced these exercises in some form as the main part of their training, and the greatest of them all, Johnny Davis, has utilized these movements and made them part of his workouts. These exercises give you that basic body power that seems to ‘throw’ that strength from an overall basis to a specific area when needed – as in the press.

“Apart from these basic body power movements, I have found that 6-8 sets of 2 repetitions is the best training combination and this view is also shared by Davis. More than two reps puts too much strain on the muscles of the lower back and the lifter gets into an ‘unconscious’ habit of back bending. Then too, the choice of poundage is extremely important. There is a vast difference between training for speed and training for power; even the muscles of speed and strength differ as to texture and color. To improve your press you must use a ‘near limit’ poundage and I firmly believe, from the results I have obtained, that this is the only way.”

“When I am working to get my record up I will push my training poundages to the limit, and I work on the press with near limit weights only one day a week. I go stale if I train with such weights on the press more frequently. The other two training days I work on the squat and the two hands dead lift utilizing the same principle back of my press training – low reps and heavy poundage for building strength. I use 3-5 repetitions on these supplemental basic body power movements when training to increase my press records. This would not, of course, apply to a beginner.”

“When I clean the weight for the press, I always pull the bar as high as possible. I also use a high split. Pulling the bar high enough enable me to settle it down comfortably in the rack position. There is a reason for the high split too. If I didn’t use it I would have to put a lot more effort into pulling the bar high. When I settle the bar into position I place it well FORWARD on the chest. I find that I can get a much more powerful drive from this position.”

“There are some lifters who have a ‘press commencing’ stance in which the barbell is held in close to the base of the neck. It is m contention that a lifter using this style cannot utilize the full power of shoulder and pectoral muscles which play a major part in the execution of the lift. When I have the bar in ‘pressing position’ I do not hesitate. I ram the weight overhead with everything I have, getting as fierce a drive as possible. Waiting too long is courting disaster because the weight of the bar across the clavicles causes pressure on the sub-clavicle artery and cuts off the supply of blood to the brain. I take a deep breath before I start to press, and breathe out as the bar passes the crown of my head.”

“You may have noticed the mention of the pectoral muscles. Because I believe they play an important part in the press I have at times included a great deal of bench pressing in my training. It has been my experience that as the power of the bench pressing increased, so did the power of my Olympic pressing increase proportionately. Another point in which I am at some variance with some authorities is over the two hands curl. Most coaches claim that the practice of the curl will hinder a good press lockout. My experience has been that it HELPS a lockout and here is why I think this is so. When I hold the bar in at the shoulders for a press, my biceps push against my forearms. I use this pressure as a ‘spring’ to gain additional momentum for the initial drive of the bar away from the shoulders.”

“However, when it comes to the clean for the jerk, large biceps can be a handicap because you need to get the elbows well up. In fact you can even lose a heavy clean because of biceps development. When you have got the weight away from the shoulders, it is then that you will feel the benefit of those deadlifts. I can set my lower back and thus do much to eliminate those fatal words, ‘too much backbend.’ All in all, my pressing style is patterned as much as possible after the style of John Davis, who I think is the world’s most scientific presser. Once I acquire his specific technique in this lift, I feel my press will increase by at least 20 pounds.”

“Apart from the actual press training I have always tried to give my shoulder muscles as much work as possible . . . to work them form every angle. This had definitely helped me in Olympic pressing. At one period or the other during my training life I have used alternate dumbell presses, deltoid raises with a barbell, press behind neck, lateral raises with dumbells and all types of one and two arm holdouts. I have also used the handstand press-up a great deal, and this exercise alone will give great pressing strength.”

“Now for my training poundages. In the press I always warm up with a weight about 40 pounds below my training poundage (training poundage being the weight I will use when doing the 8 sets of 2 reps). If I am using 8 sets of 2 with 320, I warm up to 280 x 2, then jump to my training weight . . . 320. On my next training day, about a week later, I try to add five to ten pounds to my training poundage with the same combination of sets and reps. I warm up to 2985, then jump to 325. I have used this system in all my training exercises, including squats, deadlifts and bench presses. But I have to be careful with this routine because I drive myself very hard and can easily go stale on a month to six weeks of this work. When I feel myself getting a little stale I take a rest for a few days and perform light bodybuilding movements such as curls, dumbell presses etc. During my actual training workouts I exercise for an hour with hardly any rest between the exercises and I put everything I have into each movement and repetition.

“Food,” Doug continued, “is an important part of your training. You can’t increase your records if you live on salads and raisins although some people seem to think you can. During the period while I am training to break my records I eat as much as four times daily. I also step up my intake of liquids, drinking lots of milk and fruit juices. My protein and starch intake is also increased to give me plenty of energy. Sleep is another important training factor and for the last five years I have been getting at least ten hours sleep a night. I do not observe regular hours nor do I have regular eating habits. I sleep when I am tired and eat when I feel hungry and I have never failed to achieve maximum results.”

Throughout Hepburn’s system of training runs a combined theme of hard work and common sense. He recognizes that you cannot hope to build power and strength unless you use heavy extremely heavy weights. He believes as I do in building BASIC POWER through using the strongest and largest muscle groups of the body in unison. It is a theory that is not in any way new, but it is one whose efficiency has been proven time and time again.