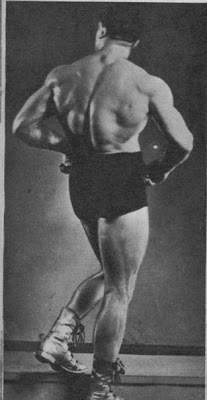 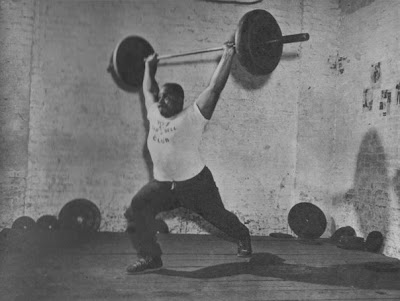 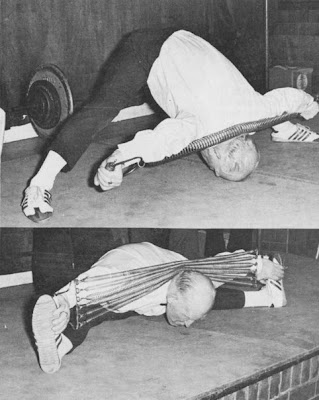 Geoff Morris at 70 years of age


The greatest lifter ever produced by England was the late Ronald Walker, known at the height of his powers as “Britain’s Strongest Man.” Before Walker, dating back to the early ‘nineties, when Eugen Sandow made England and the world physical culture conscious, there were many other outstanding strongmen in the tight little isle – Tom Pevier, Bill Caswell, Tommie Inch, Edward Aston, Monte Saldo and Bill Pullum. (NOTE: Mr. Pullum was the original trainer of Ron Walker, who was sent to him for special coaching at a crucial moment in his career.) But for all round ability Ronald Walker outclassed them all.

Perhaps the fact that Ron was not a professional performer of “sensational” feats, but rather an amateur lifter who concentrated on the 42 different strength tests recognized at that time by the British Weightlifting Association, kept him from being widely publicized. But the feats that he did perform with barbells and dumbells will keep his memory forever green among all who lift weights and strive to improve their bests.

Walker was born on December 22nd, 1909 and died on October 25th, 1948 of a malignant tumor. For some years prior to his death he had been out of competition, operating a physical culture correspondence course in London. Ron first came into prominence as an amateur during the late 1920’s but did not reach the peak of his powers until the latter part of 1937. From 1931 to 1937 he reigned as the British Heavyweight Champion and British Heavyweight Olympic Champion, and even at the peak of his powers never weighed more than 190-195 pounds at a height of 5 feet 11½ inches.

This relatively slender build made people wonder how he accomplished the feats he was capable of. At his heaviest bodyweight, 195, his neck taped 17.4 inches, both arms SIXTEEN INCHES (take a look at his lifts!), chest 45.9 inches, waist 32 inches, thighs 24.1 inches right and 23.6 inches left. These are measurements surpassed even by beginners, but it would take the greatest lifters of today to better his strength prowess as we shall see. His chest was good, his deltoids superb, but his back was amazing. He had great leg strength as well and it might be said that his remarkable lifting ability was the result of exceptional speed, faultless timing and coordination, plus all round power.

To appreciate that power one must examine a list of his official amateur weightlifting performances, all done according to the rules of the British Weightlifting Association and none of which were made later than December, 1937:

Now, go back and check his height, weight and measurements.

The Two Hands Snatch, Two Hands Swing and Two Hands Clean & Jerk From Behind Neck were, at the time Ron Walker performed them, amateur world records. Most of the others were British amateur records, some of them still standing today. Some of the other lifts represent only what Walker happened to do in them without any particular training and without even trying to create a new record. Beyond any doubt, some of these impromptu feats were made when Walker was on the way up, and were never tried thereafter.

It is clear that Ron’s greatest ability was in the quick lifts, the one and two hands cleans and snatches and swings. Yet the lifts he established as British and World records he easily exceeded outside competition in the process of taking a normal workout. He pressed 292, snatched 305 and clean & jerked 374. The total of these lifts, 969, is sufficient to have won him the present 198 lb. title. But their full impact is felt when we remember that he made these lifts almost 20 years ago.

Walker was a “temperamental” lifter, a man who never approached once in competition what he was capable of in training. On one occasion Ron had a match against the German, Manger. He lost. Next day in the garden of George Walsh’s house, he and Manger had a private get-together. On an old standard bar Ron snatched the amazing weight of 320 pounds . . . almost 50 pounds more than he had lifted the day before.

It has been said that Walker developed the habit of dropping into a backbend in his quick lifts because he had tight shoulders. Actually this is not strictly accurate. The reason Walker did use a backbend so much was that he had a condition known as lordosis, a curve in the lower spine, which made it possible for him to bend backwards from the hips to an amazing degree.

He experimented with the backbend for lifting purposes as time went on and became most adept in using it to push, jerk and snatch heavy poundages to arms’ length. Mainly he employed this layback in his presses, but the strict lifting numbers listed above do not include the weights he was capable of in this way.

When trying to grind out repetitions in training he would finish up with a slight layback when the bar hit the sticking point. With the next rep the layback would be even more pronounced, until finally, the bar hardly moved from the shoulders at all. Ron would just press himself under the bar until his arms had locked. From here he would propel himself upwards until he had regained upright position.

Anyone with an elementary knowledge of weightlifting and anatomy can easily see that such constant activity will build unusual power and development in the lumbar muscles. These qualities, Ronald Walker had to an unusual degree and the two following stories will back this up.

In one of his last lifting competitions, Ron Walker tried a 404 pound Continental & Jerk. He brought the bar off the floor, onto the belt and from there to his shoulders with ease. He jerked it to arms’ length, but the weight went a little forward. In order to catch it, Ron bent so far back that his body was almost level with the ground. While in this position the 404 pounds came crashing down across his shoulders. Walker didn’t even stagger. He simply recovered to upright position and placed the weight on the floor.

When he created his Two Hands Clean & Push of 320 pounds, the bar didn’t travel higher than the level of his mouth. From this point on he simply thrust his hips forward and dropped back until his trunk was in an almost level position, locked his arms, propelled himself to erect position and got the referee’s clap of approval. Any man who can do things like this must be possessed of the most extraordinary power.

It would be impossible to give you the complete details of his training routines. Like many other strength athletes, he learned by process of trial and error what was best for him. But at all times he believed in hard training and during one period of his career he was actually training three times a day. Every time he passed a barbell in his house, he would clean & press it as many reps as he could.

Ron Walker, for his height and weight, was on of the most remarkable lifters in the history of the strength game. Examine his lifting record and you find he is a much better all-round performer than such giants of strength as Herman Gassler, Henry Steinborn, Karl Moerke, Ernest Cadine, or even the celebrated Charles Rigoulot.

As an example of an all-round lifting efficiency there are, in the opinion of many experts, only two men who surpassed him . . . one was the immortal Arthur Saxon, and the other equally amazing and immortal Hermann Goerner, who recently died in Germany. No miraculous performances in the Olympic lifts will ever enable a strength athlete to attain the all-round greatness of Ronald Walker.

The tragedy is that he was born too early and died too soon.