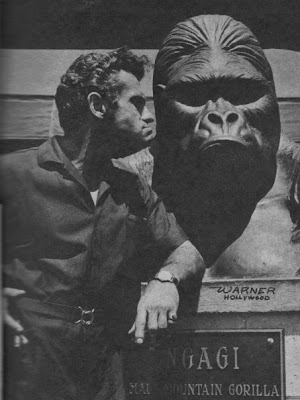 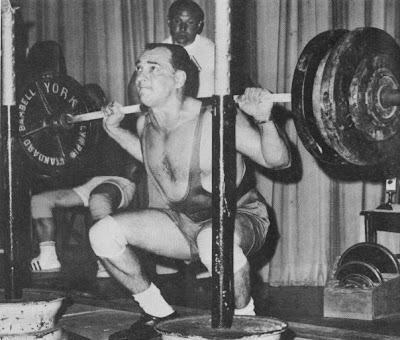 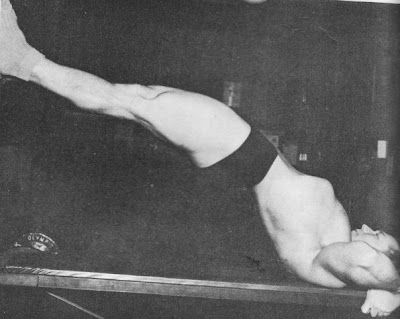 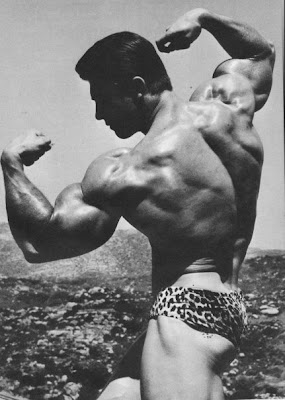 Hips, Hips, Away!
by John Grimek


Perhaps the most pressing of all reducing problems among bodybuilders and lifters is in the hip area. Most bodybuilders want to acquire slim, snakelike hips so that their shoulders will look broader. However, all the fellows who have oversized hips are invariably overweight. Of course losing weight is one way to reduce the hips . . . but the other proportions also diminish in size. Still, it’s not always the person with the big hips who does the complaining. Usually it’s the bodybuilder with normal sized hips for his structure who is unhappy over his hip size. He wants to reduce his hips to increase his shoulder size! A better plan is to rid the hips of all excess and build and strengthen the shoulders.

Most fellows avoid the squat because they’ve been led to believe that all leg work, particularly squats, tends to increase the hip structure. There is some truth to this, but only up to a point. Of course any muscle that is stimulated through exercise will grow; however, what is basically unfounded is that only in some isolated cases does any muscle grow out of proportion to its structure, and this applies to the hips as well. But any area of the body can become massively oversized through the accumulation of fat . . . this, of course, is a fact.

We all know people who, as they become less active, gain weight in unwanted places, usually around the midsection, upper thighs and hips. This is because there is a minimum of movement in these regions and fat loves to hibernate in inactive places. Therefore, instead of cutting down on leg work a bodybuilder should actually increase it . . . especially when he finds his hips are growing out of proportion.

I’ve noticed that during certain seasons of the year certain training inquiries increase. It’s obvious that during the summer when everyone wants to look his best in trunks the hips command greater attention. No wonder during this season so many problems relating to the hips pour in.

It’s easy to see why so many bodybuilders have this problem. Most bodybuilders want to get bigger and they don’t care how they put the weight on. They seek to add an extra 20-30 pounds and, when they do, the sad fact is that more than half of it is located around the hips, which isn’t really an asset. In most cases, if is just so much blubber, so why cultivate it?

Let me explain further. Any man who would work his legs and hips vigorously will dissipate the adiposity that accumulates through inactivity. And though the muscle will grow to some extent, the hips will remain firm, square and muscular . . . certainly a far cry from those soft, flabby, rounded hips.


A Case in Point

I’ve mentioned this before but I feel it is worth repeating. While squats and other leg work do develop the large muscles of the hips and buttocks, these muscles only reach a certain proportion and seldom outgrow their structure. Keep in mind I am referring to muscle and not the accumulation of fat, which can continue to increase out-of-bounds in an area. If squats increase hip size as many uninformed trainers insist, why haven’t the hips of such lifters as Kono, Berger, Garcy, March, Puleo. George and others grown out of proportion, and yet these men have done MORE squats than most bodybuilders will ever do. In fact, Tommy Kono and Bill March have both won Mr. Universe titles, and if they had out of proportion hips from squatting it would have been impossible for them to achieve this distinction. Now, doesn’t that explode the squatting fallacy? It should.

It’s more likely that when a man fails to do enough squats that his hips are bound to get large. High reps can tear down adiposity and prevent this unwanted tissue from forming. Stop kidding yourself that it’s squats that cause the hips to increase. It’s not the squats, it’s the lack of them.

However, there is another factor that cannot be overlooked, and that is bone structure. If your hips are naturally broad, that is, the pelvic area is broad and heavy, then no amount of squats or hip movements can reduce or make the hips smaller. Bone cannot be reduced by exercise. But there is a solution. If the hips cannot be reduced then build up the shoulders, back and chest. If these areas are increased, developed to their maximum size, the hips will automatically look smaller by comparison. And how can the increase of size in the shoulders, back and chest be aided? Through leg work, as paradoxical as it may sound.

Of course hips that are oversized from excess weight can be reduced through various movements and close attention to diet. Ordinary running will help you more than you may want to realize, as will walking and climbing stairs. All forms of swinging the legs back and forth and sideways also help to activate these large muscles. But so will such heavy resistance exercises as the squat and stiff legged deadlift tighten up those sagging buttocks. Leg presses and various types of leg raises all help to firm soft flabby hips.


Getting Down to Facts

If your hips are big and carrying extra pounds of bulky excess fat, don’t be afraid to squat . . . include lots of them! Deep knee bends taken to the low position will help you in your goal of firming up and strengthening the hips.

Most bodybuilders think that 5-6 reps are enough. It will be enough to build leg strength if you use heavy poundages, but if you hope to reduce the hips quickly increase your reps to 15-25, then increase the weight and do a set of 12-15 more. Continue in this way until you’ve done 50-65 squats with increasing weight and, coupled with the proper diet, watch your hips become angular and muscular. No, not just overnight or within a week or two. Be reasonable! Did you acquire such round, oversized hips overnight? No! So be content to get rid of them in the same length of time . . . months or even a year. I can say this much . . . anyone who works steadily and vigorously for two or three months will obtain such rewarding results that he won’t want to stop at this point for anything.

Squats alone should not be the only exercise employed. Variety is always better and brings about speedier results. For example, while standing and holding on to something for support, raise the leg sideways, front, and backwards. Put plenty of oomph into each movement. The same exercises can be performed while lying on the side, always putting maximum effort into each rep. Do 15, 25, even 50 repetitions. Sounds wild? Not as wild as the results that will materialize, believe me. In time you will be able to add weight with an iron boot or pulley weights and an ankle strap.

Another hip exercise is to kneel down on all fours and extend and raise one leg up as high as you can, and keep it stiff. Excellent action can be felt throughout the entire hip region, including the lower back just above the hips. Repeat with the other leg and work up to high reps as well as lower reps with added weight.

Leg scissoring – lie on your back, grip hands on any strong brace and raise the legs until your weight is supported on the lower back. Now move legs alternately in scissors fashion. Keep legs straight for best results and the exercise in sets of reps as mentioned above.

Include some stair climbing, skipping one or two steps at a time, even holding a dumbell for added resistance. This will give the hips plenty of exercise, as will step-ups to a knee-high box.

Another exercise that has merit in this regard and can be used while lying on the floor is the hip raise. Place your feet on a bench or against a wall. Now simply lift the hips and arch the back as high as possible while contracting the hips, pause a moment and return to starting position. Repeat until the hips feel worked and tired.

Include some leg presses occasionally with high reps, as well as the straddle lift using a relatively wide stance. And don’t forget walking and running to help reduce any possible weight buildup.

Lastly, don’t be afraid to squat!