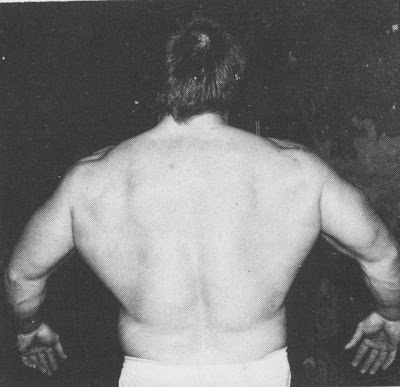 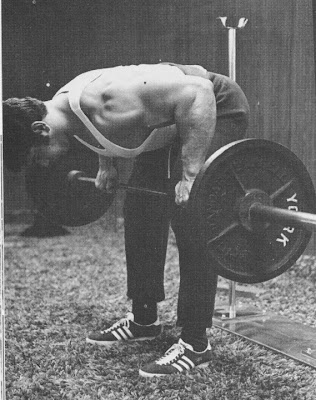 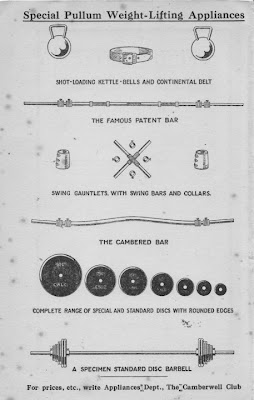 
In this article we’re going to be addressing the advanced barbell man. When I say “advanced” I mean fellows who have been playing (ahem!) with barbells and dumbells for several years (or a year, at least), and who have succeeded in becoming (a) Big, (b) Strong, and (c) Are satisfied with their existing level of size and strength, at least for the time being. Beginners can read on, if they like, but I urge only lifters who have achieved points a, b, and c to actually use the training methods we shall discuss. In lifting, as in many other fields, there is a time and a place for everything.

As most of you are probably already aware, I regard muscle pumping, cramping and “muscle spinning” exercises as the worst mistake a weight-trainee can make. I have succeeded, I am confident, in making readers acutely aware of the importance of the heavy, basic exercises in building and maintaining size and strength. Too much cannot be said about the desirability of heavy leg, back, shoulder and chest work for the best results in training. For a skinny fellow, a hard gainer, or even a natural athlete who wants great gains, the BASIC work is the thing. Don’t ever forget that. But once you’ve successfully built up to a decent level, then what? How then can you bring out the most, how can you “sharpen up” a well-bulked physique and not lose strength? With VARIETY in training!

So much garbage has been written about the value of such exercises as the concentration curl, the hack squat and the various “shaping” exercises. Many advanced men have actually come to regard it as axiomatic that advanced workouts must be “pumping up schedules” requiring hours every night of the week if they are to be successful in shaping and molding a big defined body. NONSENSE! You can see the fallacy in this widely accepted notion by remembering the following:

If a body is big because it is fat, then the only thing that a super-duper three-hour schedule will accomplish is tearing down the solid tissue you’ve built, and replacing it with inflated tissue. If you want muscles that are shapely, then the main requirement is to build them up more, never, ever to reduce them or overwork them!

Please reread that last sentence. It happens to be a fact – a truth about the human musculature – that very, very few trainees seem to realize. Merely burning off excess fat will not make muscles more slender in appearance, and more defined. You don’t have to work for that, though – you can get it simply by eating less. Also, working hard for extreme “anatomy chart” definition can put you in the loony bin. Working correctly for shape can put you ahead of that game.

To illustrate what I mean, have a look at the following three routines:


Any of these three schedules, followed thrice weekly, would put the exerciser in fantastic shape. It would build more bulk and power than he’d want, and it would surely suffice in bringing him past the stage where he felt like an old lady when he wore a T-shirt.

Please notice that all of the routines are different. The exercises vary with each schedule. Yet, all of the routines are the same with regard to one point – there is not a single pumping exercise to found in any of them. Also observe that even though all three schedules use only the heavy exercises, each schedule works the major muscles from a slightly different angle.

Most trainees would do well to follow each individual routine for about six or seven weeks. After that, they should take a one or two week layoff, and then pick up on one of the other routines for another six or seven week stint. However, and this is the main point of this article, an advanced lifter can use each routine once in every week. For example, on Monday he can do Routine A; on Wednesday Routine B and on Friday Routine C. He would thus be giving his body a most thorough “going over” with a full course of 18 different exercises during each week’s training. If he attempted to do justice to all of these movements during a single workout he would, of course, have to be removed from the gym on a stretcher; but this would not be the case if the work was divided over the course of a week’s sessions. The lifter would NOT be training any longer on this variety routine than he would be on any other, and he would be using an excellent assortment of exercises.

This is advanced training. Every single workout will call for maximum, hard exertion, since the basic idea is to stimulate growth. Growth will occur – to be sure – since the tissue stimulation provided by this system of training is all-encompassing. Where the arms are worked hard on one “groove” with the curl, they are then stimulated in a different fashion by the dumbell curl, and finally, the workload is shifted to the forearm and grip with the reverse curl in the weeks third workout. The same muscles are worked but from different positions.

Variety training such as this may be used for as long as the trainee wishes, and so long as he finds that he is making satisfactory gains. It need not be discontinued after a certain length of time like many other “specialization” courses. This method is by no means overtraining, since the body receives no more than three good workouts a week. It is not by any means a tedious method, either, since there is a switch in one’s exercises with every day’s workout. However, and this is the program’s merit – it is a very hard way to train. I am convinced that this method of training should be followed for at least three months with periodic back-off weeks for maximum benefits.

Only the heavy, basic exercise programs can begin to bring the trainee to his full development. The routines that built the greats were built around the big exercises. Do not be misled by many instructors who say that once you have attained the desired degree of strength and size you can now forget about heavy training and concentrate instead on “shaping” exercises.

Because a thing is widely accepted does not prove that it is rational, true or valid.