Speed and Pull - Charles A. Smith 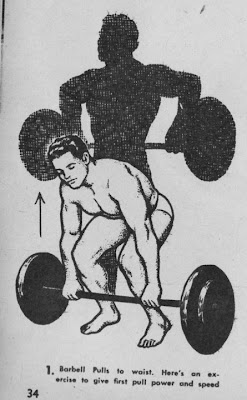 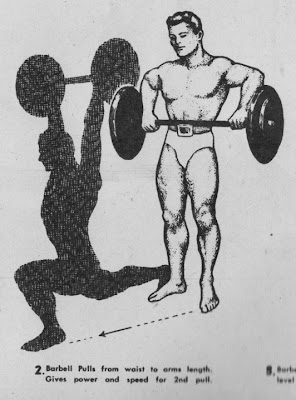 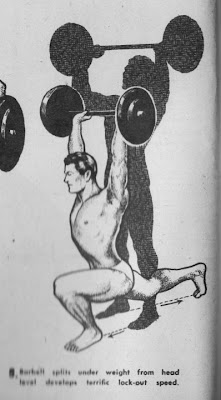 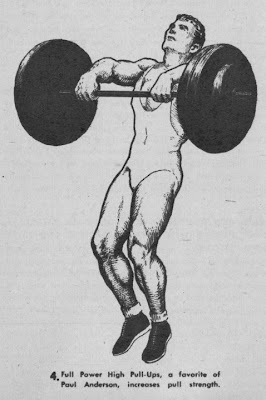 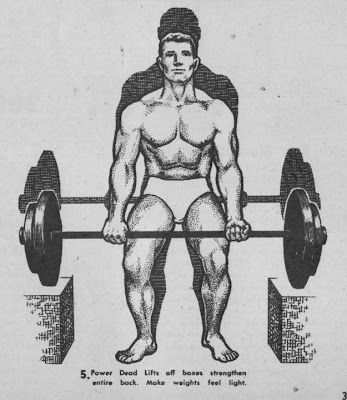 The Olympic lifter is in a better position to know what real strength is than any other type of athlete, and in a practical way. He might find it hard to put that knowledge into words, but he is never at any time laboring under any mistaken impressions. When he looks in the dictionary and sees strength defined as “the quality of power; force; vigor;” he realizes only too well that the definition is inadequate.

Lifting strength is not mere muscular contraction, the ability to lift a bigger poundage than an opponent. It is also speed, balance, technical skill, determination, the will to win and stamina. Above all these qualities stands that ability to combine them at a particular time in order to achieve a particular result . . . the best possible performance an athlete is capable of.

Most of a strength athlete’s early Olympic training is directed into building up as near perfect a style as possible. In my opinion, too much attention is paid to attaining style, and not enough to developing power and speed. Don’t kid yourself that either can come from the simple practice of the quick lifts. I’m not trying to create an impression that one is more important than the other, but that each should be regarded with equal significance and take their proper place in lift training.

It is impossible, in my opinion, to produce a lifting champion by training for style alone, and it is impossible to produce one by training for strength alone, although in the latter case a man can develop into a champion lifter more quickly because of his basic power, and both Paul Anderson and Doug Hepburn are outstanding examples of this. With little to show when it comes to style, Anderson has smashed all records in the press, clean & jerk and total, and gives every evidence of raising the snatch mark sky high . . . and he’s purely a power-trained man.

Tied up with power and style are two very important qualities – PULL and SPEED. These are so often lacking in the “style” lifter and the “basic power” boy. All too often the stylist lacks power in his pull, and all too frequently the natural powerhouse is slow as molasses in subzero weather.

Attend any novice lifting meet and see for yourself just how right I am. Plenty of boys have good technique when they are handling those first attempt poundages. Lots of naturally powerful beginners have good style for their first attempts too. But when heavier weights are handled there is a parting of the ways, both failing to get the utmost out of themselves.

The man with the good technique fails miserably as soon as limit attempts are approached. He’ll heave the weight chest high but there’s no momentum to take the bar higher. The powerhouse has no trouble hauling his commencing poundages to arms’ length, but he looks like he has ten-ton lead boots on when he gets close to his limit. His splits are mistimed because of a painful lack of speed.

But here again you can go wrong. Many beginners make the mistake of dropping the actual lifts, concentrating only on assistance movements. The correct procedure is to practice whatever lift you are trying to improve first in your training schedules.

If you are trying to improve your press, work on that first, then let the other lifts follow on, with the assistance movements last. Go through your pressing schedule, follow along with some snatches and clean & jerks, then turn to bench presses, power-presses off boxes, seated behind the neck presses, and any other pressing movements you are using for assistance.


In this article we are concerned with improving power of pull and speed of split. How should this type of program be arranged? Using the snatch as an example, first and foremost should come the actual snatch training. The system of sets, reps and poundages is not important here, only your power and speed schedules.

During your actual snatch training get an experienced coach to watch you, if at all possible. After each set has been completed and you are taking a breather, the coach should tell you what you did wrong and how it can be remedied. There must be this definite training period during which your style is taken care of.

Don’t get the idea that during the actual snatch training there’s no need to bother about getting under the bar as fast as you can, or pulling as hard as possible, because of the power and speed training that’s coming later in the workout. After you’ve listened to the coach pick your lift to pieces, and when you are ready to start another set of snatches, go over in your mind the points raised by your coach, what you did do and what you didn’t do. Then visualize in your mind a perfect snatch. Think it over for a few seconds, then perform your next set.

After the snatching has been completed start your assistance program. It will first be necessary to take a short rest . . . say ten to fifteen minutes. Then hit the schedule of assistance movements, taking particular care to perform them exactly as described.

Pulls to waist, to build power and speed for the first pull. Load up a bar to your limit snatch poundage. Grasp it with your usual snatch handspacing. Assume your customary “get set” position and pull the weight off the floor as fast and as forcefully as you can. Pull the bar waist-high, and make every effort to hold it there for a slow count of three before you lower it to starting position again. Use this snatch limit poundage to get accustomed to the movement, and when you are, step up the poundage by 20 or 30 pounds. Perform 3 sets of 6 reps, making every effort to increase each set by one rep a workout until you are using 3 sets of 12 reps. At this point increase the weight by 10 pounds, drop down to 3 sets of 6 reps, and work up to 3 sets of 12 progressively. It’s important to make each pull right off the floor from the get set position of the lift, and hold for a three-count at waist height.

Pulls from waist to arms’ length, to build power and speed for the second pull. Strap a good, wide lifting belt on . . . make sure it has a large, sturdy buckle. Take a light poundage for a start, gripping the bar with your usual snatch handspacing. Rest the bar on the buckle, and from this position with no knee dip or use of your low back muscles pull the weight up, splitting or squatting under it when it reaches chin level, and taking it to arms’ length. Make every effort to coordinate the pull and split or squat. Concentrate on getting under the bar as fast as you can. Don’t forget that the legs and back must not be used to start the bar on its way. Lower the weight to the buckle and repeat. Start off with a poundage you can handle for 3 sets of 6 reps, work up to 3 sets of 12 reps and ten increase the weight by 10 pounds, dropping down to 3 sets of 6 and working up as before. Don’t try to handle a heavy poundage. Concentrate on arm pull from waist to chin and getting under the bar quickly to get it to arms’ length.

Split or squat under weight from head level, to build lockout speed. Notice that one section of Illustration 3 is shadowed. This is the starting position of the exercise. Take a weight 20-30 pounds below your snatch limit and haul it to arms’ length. Lower it down until it is level with the top of your head. From there, drop down swiftly underneath it in a split so the bar snaps out to locked arm position. Recover to upright position, lower the bar down to head level and repeat. Use as many repetitions as possible in this exercise, stopping only when you are breathing heavily or have become too tired to execute the exercise properly. Take a short rest and perform some more reps. As soon as you are accustomed to the exercise, start using heavier poundages, up to and beyond your snatch limit. At this stage begin with 3 sets of 6 reps, work up to 3 sets of 12 before increasing the resistance by 10 pounds.

Full power pulls, to increase overall pulling power. Here is one of the greatest assistance exercises ever. Paul Anderson practices it constantly, and Doug Hepburn swears by it. Oooh, those ****ing high pulls. Illustration 4 shows the finish position of the exercise. From the get-set position and using your regular snatch grip, haul the bar up chest high with every ounce of your power, rising on your toes and flinging your head back. Lower the bar and without pause of letting the bar touch the ground, haul it up chest high again. Most lifters start off with their snatch limit. I advise the use of a light weight until you are accustomed to the exercise, then step up your poundage. Begin with a weight you can handle for 3 sets of 6 reps and work up to 3 sets of 12 before you increase resistance. Don’t forget to drop down to 3 sets of 6 when you do, and don’t forget to give that pull all you’ve got on each and every rep.

Partial deadlifts, for strengthening the entire back. This has always been one of my favorite exercises because it not only gets you used to handling heavy poundages, but it also strengthens the shoulder girdle and lower back, and builds up confidence and a contempt for big weights. After holding five or six hundred pounds in your hands, a limit snatch can feel much lighter. Notice the use of a reverse grip. In using this exercise as a snatch assistance movement your handspacing should be considerable wider than for a normal deadlift, but not as wide as your snatch grip. From the position shown in the illustration, deadlift the bar until the body is in an upright position. At this stage shrug your shoulders and try to perform a partial upright rowing motion. Of course you won’t succeed, but make the effort! Lower the bar down to the starting position and repeat. On your final repetition hold the bar in your hands for as long as possible before lowering it back down. Start off with 3 sets of 6 reps, work up to 3 sets of 12, then increase the weight 20 or 30 pounds and begin again with 3 sets of 6.


Unless you’re a Paul Anderson or a Tommy Kono you’ll find it impossible to use every one of these exercises in the same workout. You can choose a couple which you feel will do you the most good, depending on your personal weaknesses. As soon as you have obtained the benefit you desire from those two exercises drop them and choose another two, and so on. I must once again strongly advise you to train the actual lifts first in your workouts, and then use these assistance exercises. However, if you are an advanced man and want a change from the main lifts, then you can use these movements for a month, selecting three of them and including the bench press, then returning refreshed to the main lifts after a month is up.

These ideas can readily be applied to other competitive lifts aside from the snatch, which was used as an example in this short article. Following a period of study and careful planning, the thinking lifter should be able to design a schedule of assistance work for any main lift, following the guidelines given herein.