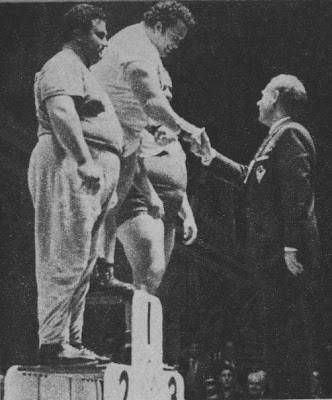 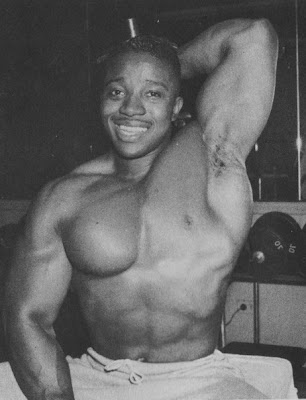 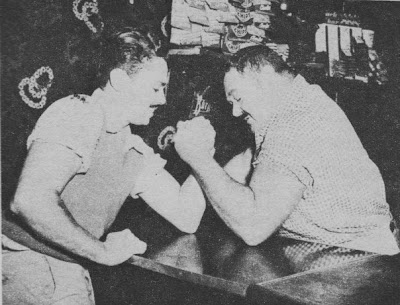 Small Hands Can Be Powerful
by Author Uncertain (1957)


Some of the strongest men have small hands; many thin men have large hands. When you shake hands with a fellow you often become conscious of his grip or the size of his hand. Some will give you that “death-grip” which I, myself, have many times experienced; whereas others merely hand you their limp fingers which feel like a cold mackerel. And yet, there are a few fellows who are so self-conscious of their strength that they want to impress everyone with their tremendous grip whenever they greet you.

The late Ernest Coffin, who was a powerful and deliberate hand-squeezer, caused many temporary disfigurations on the top of my own right hand so that it engendered reluctance to offer a handshake to him at greeting. He always delighted in giving me the pressure comparable to a vice. But this, this was a cultivated pseudo exuberance because he used not to be that way. It seems that it all came about during one of our conversations regarding the great Eugen Sandow. Ernest was always an ardent Sandow admirer who eventually proclaimed himself to the “the world’s foremost authority” on this oldtime strongman. Mind you, prior to our particular conversation, Ernst Coffin was a gentle soul whose handshake was also gentle. On this special occasion, however, I chanced to reveal the power that Sandow had with his hands, and so, from that day hence Coffin’s whole world changed and he began to fell as though he was a reincarnation of Eugen Sandow. He then proceeded to take out his complex on me via that previously mentioned “death grip.” Coffin had very strong thick hands, yet they were not large in size.

One time during World War II, I chanced to visit a home where I met a lad who was about to go overseas. I particularly noticed his extra large hands. This fellow was about my own height, five feet ten inches, and he appeared to weigh around 175 pounds. He was not what you would term “athletic in appearance,” but he did have a pair of hands that reminded me of the hind paws of a huge grizzly bear. The palms of his hands seemed to be at least five inches across and their thick square width extended from the fingers to the wrist. This, of course, was evidently hereditary. I mention this case as a contrast to another – Paul Anderson.

When Paul Anderson was in Hollywood not so long ago, he and his brother-in-law Julius Johnson and myself dined together. I then particularly observed the smallness of Paul’s hands. They were thick, yes, but much smaller than one would expect when considering his huge size of body and mentally uniting with his colossal power. One would immediately imagine that the world’s champion heavyweight Olympic lifter would possess large and extremely bulky hands, yet he doesn’t. Paul’s hands are actually below average size for one his height, but they are mighty thick. Anyway, it adds much mystery concerning gripping power!

I once had a strange experience with mighty Mac Batchelor. Mac, at his 325-lb. bodyweight, and his hands, supplied me with what I thought was a great idea. I planned to have his hands photographed, for Mac was then the world’s champion wrist wrestler besides being a lifter of tremendous poundages. Consequently, I induced big Mac to go with me to a studio. I schemed to have Mac’s hands photographed beside my own hands so that I could publish the comparison between their sizes. I surely thought that Mac’s hands would dwarf my own in the picture. The photos were taken and I awaited their processing with keen anticipation, but I met with a horrible disappointment. My own hands, which are of normal size as I would consider them, appeared in the picture to be a little larger than did Mac’s hands. Hence I have never released this photograph. In fact, I think I destroyed it, together with the idea I had at the time. And, when analyzing hands such as one might expect to be attached to mighty Mac Batchelor’s body, there would be visionary hugeness. Of course, Mac’s hands are very dense in the palms and his fingers are also of proportionate thickness, yet his hands are very deceptive to the eyes that look for digital power.

On numerous occasions I have shaken the hand of Eugen Sandow during the bygone years when I associated with him in London, England. His hands were very thick but not large. When I grasped his right hand in greeting I felt conscious of holding bulk and density but without a feeling of size. Sandow, as you may remember, could chin with any finger of either hand, and he also used to amuse friends in restaurants by rolling spoons. He would start at the end of the handle and then roll it so that when it reached the concave section the rolled part fit right in the bowl of the spoon itself. Too, he lifted enormous weights, juggled with 56-lb. kettlebells, turned somersaults with a pair of 50-lb. dumbells, as well as tore small sections from packs of playing cards with finger strength alone. I mention these few items as they link with his small thick hands. Sandow’s hands were about the same in size as the hands of George Jowett.

Jowett really has unusually thick hands, yet not large ones. But when you gras pone in a handshake you really feel beef. You immediately notice the large contraction of muscle that lumps out between his little finger and wrist, as this thick muscular section causes you to wrap your fingers around it with unconscious admiration. And Jowett’s fingers are short, but what a grip he has, even today. Years ago he used to bend horseshoes and handle extra heavy weights of all shapes and sizes. One time I saw him lift a blacksmith’s anvil that weighed 137 lbs. He did this by tensely grasping the “neck” of the anvil and then swinging it to his shoulder, then pressed it (in a balance) to overhead position. That feat surely took hand power as well as strength of many other muscles. Around that time there was another professional strongman whose grip was outstanding and who could perform some incredible feats. This was Warren Travis.

I used to associate a lot with Travis. In fact both of us once worked in the same show. He then had a dumbell that weighed only 110-lbs. but which had a handle about eight or ten inches long and about four to five inches in diameter. Travis always had a $1,000 bill which he would take from a small pocket of his leotard and flaunt it to his audiences with the offer to give it to anyone who could lift his 110-lb. dumbell with one hand to overhead position as he did. He would then bend forward, grasp the bell, sweep it to his shoulder and press it aloft. Now, I was quite strong in those days but I could never get the blamed bell off the floor. Some might powerful fellows tried it at times, only to fail. It seemed that the circumference of this dumbell was too much for any hand to obtain a grip on and, therefore, it simply slipped away from any other attempt save Travis’s own. Trick? I suppose so, for Travis was a master showman, but who am I to reveal a suspected secret? Anyway, Travis had very small hands that were smooth, yet very thick, with stubby fingers. It adds more mystery to the question: whence comes hand power?

My old friend Kenneth Terrell, who has been actively playing in motion pictures for the past twenty years or so, at on time possessed one of the finest physiques in America. He was quite a good lifter, too! He could clean & jerk 285 pounds, which was not so bad for his 185-pound bodyweight. He used to do a hand-to-hand balancing act in vaudeville with a fairly heavy partner. So much for highlights of his background. Terrell’s fingers are very long and somewhat bony, yet he used to have power-plus in them, but he does not own a muscular looking hand. Thus it proves that strength remains a hidden thing which cannot be discovered by appearances of one particular body section.

The largest hand I ever shook belongs to Primo Carnera, the former heavyweight boxing champ and now a wrestler. Carnera, as you know, stands 6 ft. 5 in. and tips the scales around 265 lbs. When I first shook hands with him I immediately felt as though I had hold of a ham, or else was lost somewhere amid a fearsome invisible power, although Primo gave me a courteous grasp and one without any pressure, as a gentleman would shake hands. But never in my life have I ever grasped such a huge mitt! Its thickness was most unusual and seemed to be at least three inches through the middle. His whole hand, including the fingers, encircled my own as would both hands of Joe Weider put together, and the hands of Uncle Joe are a trifle large. Anyway, when considering Carnera’s extra large hands, they seem to correspond with his size and also his natural power, for he is strong even though not a weightlifter. His hands become unforgettable and smother the smaller sizes of our best lifters’ hands.

Doug Hepburn is another man who does not possess large hands. His are slightly bigger than Anderson’s, Jowett’s or Sandow’s, yet far smaller than one might expect before feeling his encircling digits in greeting.

I must confess that I have not been as observant as I might have been during my handshakes with bodybuilders whom I greet at physique contests, but after writing this perhaps I shall give their hands more attention. The only drawback to this is that I am afraid that one or two of them might feel inwardly strong and proceed to give me that bone-crusher grip and supply further bruise marks atop my hand. Perhaps I shall hand them that dead fish handshake and play safe.

Anyway, it must remain conclusive that hand size is not a criterion of power, unless one or two chance to be exceptions in a crowd and possess extra large hands through inheritance. It is anatomically impossible to enlarge the actual hand size. You can increase its thickness by continuously gripping heavy and/or awkward objects but you cannot lengthen the fingers nor enlarge the palm except in density. A small palm can possess as much strength in it as would a large palm, and long, thin fingers can also have as goodly power as short, stubby digits. It all depends upon the kind of work you give your hands.

Strength will always remain unseen, uncalculated and unknown until it is displayed.