A Seminar with Kazmaier - Jon Smoker 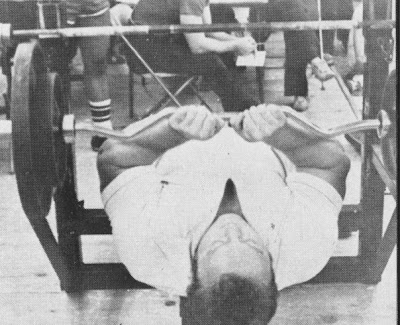 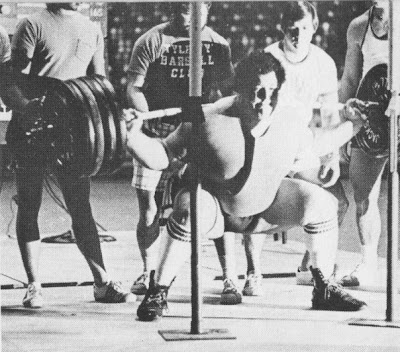 A Seminar with Kazmaier
by Jon Smoker (1980)


The one powerlifting record that stands head and shoulders above the rest is Don Rheinhoudt’s 2419 total. Like an impregnable rock battered by breakers, it has withstood the test of time and many challengers, proving just how far ahead the others Rheinhoudt was. If anyone is going to catch him, anyone out of the current crop of superheavyweights, it would seem that Bill Kazmaier has the best chance. For a seminar at SMO’s World Gym, Schererville, Indiana, Kazmaier was confident, analytical, shrewd, realistic and methodical about his lifting. And he also possessed that one ingredient so essential to success in lifting but so often overlooked – inventiveness. And when these attributes are combined with his massive, powerful physique, his breaking of the total record seems imminent if he can stay free from injuries. The contrast with his predecessor could not be more striking. Rheinhoudt is boyish, affable, and bends over backwards not to offend anyone. It is hard to imagine anyone saying something negative about him. In fact, I have always found it downright paradoxical that one so huge and so incredibly strong should be so humble. Kazmaier, on the other hand, will tell you matter of factly that he is currently the best; not with braggadocio, just business-like.

Because the seminar followed a bench press meet, and it is, admittedly, Bill’s favorite lift (as of this writing he has the world record at 633 lbs.), much of the discussion centered around bench pressing, all of it in a non-structured, question and answer format.

He began with just an empty bar, demonstrating his technique. Bill brings it down low on his chest, keeping his wrists directly over his elbows, because he feels that this position, rather than a wider or narrower grip, will keep the muscles involved in bench pressing in balance with each other. His descent is slow, controlled, as he wants to hit his chest in the perfect position; and then he explodes the bar off his chest with pectoral and triceps strength, inching it back off and up (stair-climbing, he called it) so that his knuckles turn slowly over the bar and finish in a more upright position than at the start. Tricep and deltoid strength are used in the lockout. Bill also recommended wrist wraps for the extra stability they provide.

When training for a meet, he likes to bench every 4th day, alternating light and heavy workouts. Most typically he will do about 8 sets of regular bench presses and then 3 sets each of narrow grip and wide grip benches. For the narrow grip, Bill moves each hand in about one inch from his normal grip and brings the bar down lower on his chest. For wide grips, he moves his hands out about an inch on each side and the bar is lowered higher on his chest.

He feels that benching with these three different positions gives him all the overall development he needs. For this reason he said that incline presses are unnecessary. Some members of the audience must have found that hard to believe, as he had to reiterate that point more than once.

Bill usually takes about eight weeks of concentrated effort to get ready for a meet. He plans the entire cycle ahead of time, including the reps and weights to be employed during every workout. The cycle starts with reps of 5, then cuts to 3 and 2, adding progressively heavier weights the closer he is to the meet. He rarely misses any of the sets since the workouts are planned intelligently in advance, which gives him plenty of time to concentrate on the weight, projecting himself handling it. Being certain the plan is a realistic progression helps too.

The day after his bench work, Bill hits his triceps with 8 to 10 sets that can include extensions, push-downs or french curls. He also uses front lateral raises and dumbell presses for his deltoids, and seated hammer curls for his brachialis, which he thinks are very important for the controlled descent when benching. He demonstrated his unique technique on the triceps extensions. Using an E-Z curl bar, he neither touches it to his chest nor completely locks out. It’s more of a quick rocking action that covers only about 12”, and his elbows are held at a 90 degree angle, rather than perpendicular to the floor. He also mentioned that since his triceps get plenty of work the day after bench pressing he doesn’t lock out his benches during workouts either, concentrating instead on the mid-range and initial explosiveness.

While talking about assistance movements for the bench, someone asked Bill what he thought about Mike McDonald’s cambered bar. Although he expressed much admiration for McDonald’s amazing records, he did not have much use for the bar. “It wouldn’t touch my chest. 315 lbs. isn’t enough weight to drive the bar to my chest; I need about 400, so how could I possibly use that bar? I could never touch my chest with it.” He also stated that while McDonald’s wide grip obviously worked well for Mike, he could not bench that way either; having tried it in the past he found that it put far too much pressure on the pectorals, causing pulls and tears.

Kazmaier’s training for the squat is similar to that for the bench press. He uses an eight week cycle, decreasing reps from 5 to 2. Like the bench, he hardly ever does singles in training, preferring to save that for meets. He likes to squat about every 6th day and on the days that he squats light he does assistance work for the legs and deadlifts heavy first. On the days that he squats heavy, he does his rack work for the deadlift. His assistance work for the legs is mainly limited to leg extensions, hamstring curls and calf raises. Of late he has been doing a lot of high repetition. light weight leg extensions, trying to rehabilitate a quadriceps injury. While on the subject of injuries, someone asked Bill about groin injuries, and he thought that cable abductions with a wall pulley were the most effective. Having experimented with different foot spacings on the squat he has found that the best technique is to keep the knees directly over the ankles, to prevent undue strain on the knees and ankles. Bill also does no running since it too causes problems with he knees and shins. To get extra cardiovascular work he prefers the stationary bicycle instead.

Kazmaier demonstrated his style on the deadlift: hips high and back flat. He found that this style works best for him as he readily admits to getting a lot of back into his deadlifts. For that reason he feels that straight-legged deadlifts have no value for him because, “my back gets enough work from the regular deadlifts I do.” Bill does, however, use hyperextensions to supplement the development of his erectors. His assistance work on the deadlift usually comes the second day after deadlifts and it includes wide grip pulldowns to the chest (as he is too tight in the upper back to do them behind his head), narrow grip pulldowns, bentover rows with dumbells and regular bentover barbell rows. He thinks that power cleans are unnecessary as the pulling power involved is different from that of deadlifts. Moreover, he thinks that the traps are worked more effectively and he demonstrated his technique on them. He did about 30 reps and the first were done with a quick pumping motion; the last 10 with a slower, more controlled style. The only difference in his deadlift 8-week cycle is that he works in the lower rep sets earlier on in the cycle. And he does use straps when training except for heavy doubles and an occasional single.

Of course, people wanted to know how Bill maintains his weight, and he stated that he eats a lot of small meals during the course of a day. He also likes to have a couple of blender drinks per day, favoring milk and egg protein powder. Bill recommended large doses of Vitamin C for recuperation. He has no intention of forcing his weight up to a sloppy 350, although he could if he wanted to; believing that “an eight of an inch of muscle is worth more than 2 inches of fat.” And Bill does work at keeping his waist firm, preferring abdominal work with very heavy weights.

As with most seminars, the steroid question came up, and Kazmaier had some cautionary advice. He used the example of a miler to make his point: suppose he is running a 4:05, and after a period of time with steroids he finds he can do 3:55. “Ten or twenty years down the road, when he is feeling after-effects from the steroids he took, will he think it was worth it?” Bill’s second point was that once a person begins taking steroids they can never go back; they will never be satisfied with doing less again. “So maybe it’s better never to begin, and be satisfied with what you can do without them.” And finally, he said if you feel that you must take them, get them from a doctor and have periodical blood tests done.” Bill personally knew of athletes who had “really messed up their blood” with steroids and wound up in the hospital.

After the seminar Bill showed more of his class as he patiently fielded still more questions, signed autographs and posed for numerous photos shaking hands with people who will show them to their friends later on and say, “Now you can see how big Bill Kazmaier really is.”