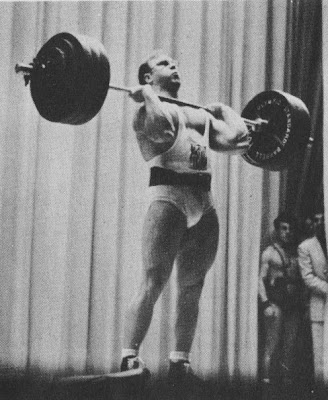 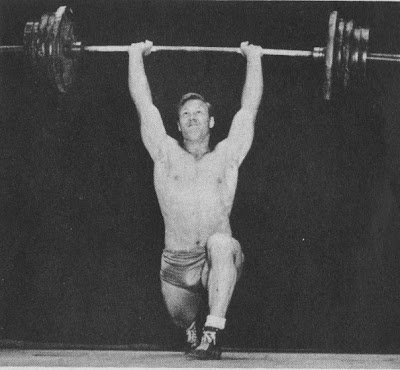 
Power pressing with brute force is indeed admirable, and truly classy snatching can provide almost poetic pleasure to the beholder, but for sheer thrill, no lift surpasses a heavy clean & jerk. You can always count on pandemonium from an audience in front of which a world record clean & jerk has just been performed. Human nature being what it is, the average man on the street as well as the seasoned lifting addict are most impressed by the guy who puts the most weight to arms’ length overhead and holds it there long enough to demonstrate mastery over it.

During his lengthy and illustrious career as a champion weightlifter, Norbert Schemansky eclipsed world records in this lift on numerous occasions. Perhaps his most dramatic performance took place at Roubaix, France, in 1954, shortly after the world championships for that year were staged at Vienna, Austria. Fresh from his world championships conquest, “Ski” cleaned and jerked the stupendous weight of 425 pounds, 200 pounds above bodyweight, in front of a hypnotized, unbelieving crowd of Frenchmen. When that bar returned to the platform, the crowd sprang to life and to a man shouted and yelled. Jean Dame, so it was said, uttered the words, “Now I have seen everything!” And the man who has seen ‘em all, none other than Bob Hoffman himself, recalls this lift of Schemansky’s as the most dramatic he has ever witnessed.

Some men are so-called natural jerkers. It isn’t rare to hear of such men being capable of jerking 50 pounds more than their best clean. Norbert Schemansky belongs in this category. “The jerk has always been natural for me,” says Norb. “As a result, I don’t do too much work on it. About twice a month I’ll practice jerks with weights up to my top clean. For example, if I’m cleaning 350, that will be about as high as I’ll go in the jerk.”

Several times in his long career, the 1952 Olympic champion has continentalled 450 pounds to his shoulders unassisted. Although a completed jerk with this tremendous weight has always eluded him, it was rare indeed that Norb failed with a jerk after cleaning a weight. “I’ve jerked 430 off the rack and have done reps with 400 pounds,” he admits. “Even when I don’t do the lift regularly I can jerk 30 to 40 pounds more than I can clean anytime. Since my last operation I haven’t done 50 jerks in the gym and yet I can jerk 380 without a split and am sure of 400 pounds if I can get to clean it again.”


A good jerk begins with a good clean. If the bar is caught correctly on the shoulders and the recovery from the split or squat is relatively easy, the lifter is much more likely to complete the lift than he is after a bad clean that is a real struggle. Note Schemansky’s solid preparatory position in the accompanying photo. The weight is 450 pounds, which he brought to this position via the continental method. Norb’s spine is straight, his head and chest high, his elbows well forward. This is the ideal position.

Frequently a heavy jerk is missed because the lifter holds the bar at the shoulders for too lengthy a time. Ski’s advice is to get set properly but not to tarry in this position, for there is the tendency for the supporting muscles to tighten up, which cuts down that spark necessary to execute a jerk properly. Another common fault Norb cautions lifters to avoid is that of going too deep in the dip preliminary to the jerk. This movement should be speedy and springy, which it cannot be if the lifter bends his knees too much. On the other hand, going low under a weight in the jerk is something Norbert Schemansky has done perhaps better than any other lifter in history, and it is a tribute to the fabulous power in his legs that he has habitually recovered to successfully complete a lift after just barely avoiding a knee touch in the jerk. The lower photo, which was taken when Norb was lifting as a 198 pounder, is typical of the form he uses when jerking maximum poundages.

Often we see a contestant lose a jerk because the weight is too far forward relative to the lifter’s body. Not even the strongest arms are able to support a heavy barbell more than momentarily unless the weight is directly overhead. Schemansky takes exception to those coaches and second-guessers who counsel the lifter with this fault “to get the weight back.” He says, “Too many people try to tell poor jerkers to get the weight back, which is a lot of baloney. THE ONLY WAY TO JERK RIGHT IS TO HEAVE THE WEIGHT UP AND AS HIGH AS POSSIBLE, AND WHEN SPLITTING, STEP FORWARD INTO IT. How can a poor jerker get a weight back unless he steps into it? You can’t push the weight backward through your head as it goes from shoulders to arms’ length. You can and should step into and under the barbell, and I’ll say this again, this is the only correct way to jerk.”

As in the other lifts, Norbert Schemansky believes that the best way to improve one’s ability to jerk heavy weights is by concentrated practice of that lift. But he is also very much aware of the fact that the key to good jerking is a combination of leg power and speed. “I think that if any lifter wants to improve his jerk, he should build up his leg power by means of heavy squats and try to work up a little more speed in the lift. Supporting heavy weights, both at the shoulder and at arms’ length, can also help since it will give you the ‘feel’ of the weight and help build confidence as well,” is his comment.

“I don’t have any secrets or special training programs. I think when I train, I just train a little harder than the next guy. And I still say, if you want to bring up your press, snatch and clean & jerk, you just have to do more of them.”