Hip Action in the Pull - Charles A. Smith 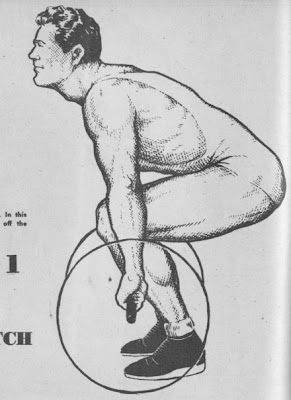 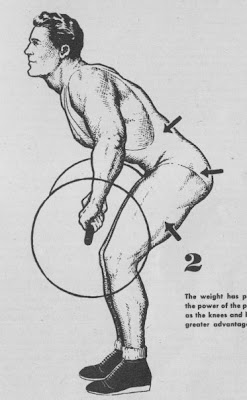 
A famous philosopher and teacher close to 80 years of age was once asked what was the most valuable piece of knowledge gained from his experiences during a long and fruitful life. He replied humbly and modestly, “The more I learn the more I realize how little I know.” Each new piece of information, each theory pushed to a logical conclusion had opened up new fields of thought, new paths of knowledge to explore, and had in turn given birth to new theories and discoveries and had filled him with a fresher and greater lover for Life. Here was a man famous and wise because he knew enough to realize that no one is ever finished learning, that an intelligent curiosity is the key to all knowledge.

I have often wondered how much farther advanced our Sport would be if authorities and instructors adopted the same attitude. Instead of sitting back, boasting of the champions they had produced, reproaching others for failing to do so, insisting that they and they alone were the sole source of weightlifting knowledge, that no one else knew a thing, that he style they taught, their methods of training were the greatest, they had said: “We are on the right track but we have so much more to learn. Perhaps we do not have a complete picture of what is right. Others may contribute something,” then I am sure that all the bad feeling and the slinging would never have occurred. Men only hate when they FEAR. John Fulton pointedly remarked in a recent edition of a British magazine . . . “The truth is not the possession of a small group of men but is to be found, in part, IN ALL MEN!”

The greatest enemy to American Weightlifting is self-satisfaction, a “know it all attitude.” A contempt for what others are doing is dangerous. To reason that because we have always ruled the roost we’ll continue to do so is stupid and futile. to argue that because our lifting champions have won title after title, then our methods and lifting techniques are in advance of all others, is narrow sighted. No matter how good we think we are, and no matter how much we think we know, we can always be a whole lot better and know a heck of a lot more.

Each weightlifting contest I attend, I do so with eagerness, not entirely because of the kick I get from watching good lifting, but because of what I hope to learn . . . and I’ve got a lot to learn. I have yet to see explained by certain authorities why it is that some men can use a wide grip in the snatch, while others have to use a relatively narrow handspacing. I have yet to see them explain what part the trapezius, serratus, and pectoral muscles play in the press. In my stumbling way I’ve attempted to explain these things, yet without claiming I was right, freely admitting I could be wrong, trying to check my theories by watching men lifting and discussing their experiences with them after the meet. My thought is that out of the many mistakes I might make, one grain of truth will emerge and will help some lifter among thousands improve. If that happens then I’ll consider my time well spent and my words unwasted.

The sole idea behind these articles, as I’ve said before, is not to set myself up as any sort of authority, but to explain certain ideas of mine, to present the ideas of others, with the hope that the information will help the beginner better understand the basics of lifting technique. I am not trying to push over any particular style but merely endeavoring to help lifters UNDERSTAND LIFTING!

With that off my chest, let’s get onto the subject for this article – Hip action in the Snatch. Now, you have already learned the two-hands snatch is a coordinated effort of the thighs, back and arms . . . that the power of the thighs and back take the weight off the ground and its velocity is boosted by the power of the arms. At a certain point the split or squat is started and by thus getting under the weight, the bar is successfully locked to arms’ length.

You have already gone through the stages of learning the correct position for the start of the snatch (see illustration 1), and how after what seems to be a slow start off the floor, the pull is accelerated as the bar passes the knees and moves into the region of the hips. To gain full and explosive force, to enable the arms to give the greatest possible boost to the power of the legs and back, the hips must correctly extend, in conjunction with the straightening of the thighs and raise on toes. But it is HIP ACTION that adds that extra “flip” to the bar and enables the muscles of the arms and shoulder girdle to act to better advantage.

When you are in the get-set position (illustration 1) you cannot get as powerful a contraction of the leg muscles as you can in the position of illustration 2. The closer the buttocks are to the floor, the less weight you can handle. You can prove this by observing how easily you can handle a weight in the half squat, when the same poundage takes plenty of effort to recover with in a full squat.

When the weight passes the knees, the power of the pull should grow greater since the knees and hips are working at a greater advantage. At this stage, every effort should be made to drive as fiercely with the thighs as possible. In fact there should be a conscious effort to “punch” the feet through floor. By constant practice, this fierce leg drive is made simultaneously with a straightening of the trunk (hip extension involving the muscles of the lumbar region), and it too is made with all the force you can muster. At this point the body is in a straight line.

You can see what is happening if you take a look at illustration 3. The bar is approaching the navel. The lifter is up on his toes and the trunk is upright. The arms are coming into the picture here and are boosting the speed of the bar with their power.

But there is another important point to remember and that is you are, with this deliberate effort of the hips (straightening of the trunk) preparing yourself for the split. Take at look at Illustration 3 again. Notice that the head of the lifter is flung back slightly. He has led with the head throughout the lift, the action itself aiding in keeping the back flat and thus obtaining a more powerful contraction of the erector muscles.

But when the body is upright, the head represents one end of a lever with considerable force applied at the other end (base of the spine and hips). The result is that there is a SLIGHT thrust forward of the hips, thus giving them momentum in the right direction for the split . . . FORWARD AND DOWN. Failure to add to the force of the pull by straightening the trunk (extension of hips) adversely affects the snatch. The result is the lifter may mistime his split and fail to put the full force of the arm pull into the movement.

So it is easily seen that an extra “flip” or boost is added to the bar by hip action. If you want to get the most out of hip extension, the body must be pulled UPRIGHT. The buttocks and the immensely powerful muscles of the spine, the erector spinae group, pull the back into upright position, and if you learn to use them with explosive force you will add considerably to the speed of the bar which is initiated by the thighs and ankles. In combination with hip action comes the pull of the arms which further boost the speed of the bar and give you a greater chance to get it to arms’ length.

It is not too important to visualize this hip action in the mind. Just picture the bar moving as close to the body as possible and as straight as possible, the raise on toes, the press back of the head and the straightening of the body into erect position. Follow out these instructions and in the deep split the bar will be exactly where it should be for perfect balance and recovery from the split, directly above the hips.

And don’t forget that while it is good to pay a lot of attention to technique, you mustn’t forget the building of power. Include in your schedules such basic strength movements as squats and dead lifts. All the style in the world is useless without the strength to back it up.