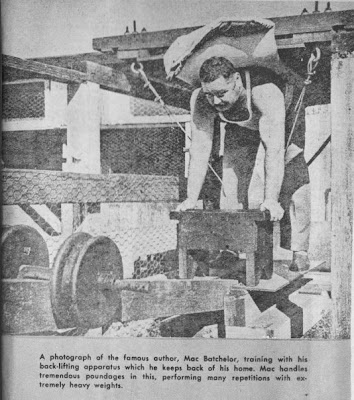 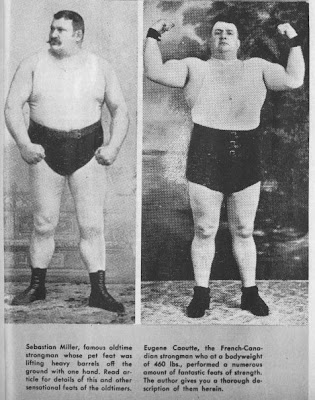 
Question: Can more weight be lifted using a harness, or back lifting a loaded platform? What is the greatest weight claimed?

Answer: Allow me to list a few of the best men at this form of lifting.

George Lettle, 136 lbs. 5’4” tall, of Germany, raised 2976 lbs. in a back lift which is probably a record for so light a man.
Boyd Shearer, 165 lbs., of Portland, Ore., back lifted 3502 lbs.
A little known fact is John Grimek could do a ton-and-a-half at either harness of back lifting though he practiced but a short time.
Wilfred Cabana of Canada, 3300 back lift.
Horace Barre, 5’9”, 320 lbs., another Canadian, 3890.
Warren L. Travis raised over 4000 lbs., as did the famous Louis Cyr.
Modern Navy strongman Walsh claims well above their records and has his mind set on accomplishing 5000 lbs. Unlike the others, he uses a massive table and lifts the four legs off the floor.


At one of my performances in which I raised a car using a hip belt only, Ad Herman accompanied me the nite of the show and was perturbed because I was actually lifting the weight claimed, a chain running directly to the car beneath me. As he has been helpful as a technical advisor, a strong man of the old school, he berated me for not letting him have had the raised scaffold built to his specifications that enable the lifter to hoist enormous poundages by an indirect pull changing the ratio where little expenditure of energy is required. Years ago, Desbonnet of France claimed it was a common practice, this indirect lifting, and Herman exposed the trade secret to me that evening after the show. In fact if someone wished to engineer the lifting stand at their expense I can take any five of the world’s strongest men and they should be lifting well over 5000 lbs. in a short time with little discomfort and no pulleys, block & tackle or gears involved, although the principal is the same.

And this led me to the theory I have about back lifting. In March, 1924, “Stout” Jackson, 5’10” and 188 lbs., back lifted twelve 500 lb. bales of cotton in Lubbock, Texas, on a flexible platform the total weight of which was 6475 lbs. He was featured in “Believe It Or Not” and ridiculed, as his total surpassed any previous claim by over a ton. In the picture of this lift the first layer is 5 bales, the second layer is 4 bales, and the top layer, 3 bales. The platform is well bowed. Actually the weight was lifted by degrees and this allows building up momentum as the total weight isn’t reached until the precise moment the legs lock, and the ends of the platform clear the standards simultaneously. The initial leg bend is greater at the start due to the flexible platform, instead of the standard rigid type in general use. 75% of the weight has been raised before the body has reached a support position. The weight is not directly over the back but a portion of the pressure is lateral. In other words, indirect.

Bear in mind, on his feet, Arthur Saxon balanced a plank bowed from the weight while lying in a supine position, legs at right angles to the body, the plank loaded with 15 men totaling over 3000 lbs and he bent and straightened his legs to show control of the load.

Goerner supported two tons in the same position, and Milo Steinborn supported 5,000 lbs. over his body before one of his legs was shattered in an accident.

In back lifting, the whole body is taxed, not just the legs. The weight is not raised directly vertical but forward and up in much the same manner you pry an object with a crow bar. This is especially true of harness lifting where hand or elbow supports are used. The body “jacks” or levers forward, hoisting the weight up.

“Stout” Jackson is still active, though 62 years of age, and weighing 225 at present his photos show a heavy bone structure and dense tissue. For years he posted $1,000 to anyone who could equal his strength and never had to forfeit a penny. It was not unusual for him to put challengers on his own loaded platform and, bouncing it up and down, shake them off. He still breaks half-inch silk finish lariats using a hip belt, besides driving a 20-penny nail thru a 2” board and extracting it with his teeth. One of his later innovations is two super-large stretching cables (originally he used truck inner tubes). He puts one over each shoulder, his foot on each of the lower loops, and performs squats. He offers $1.00 a second for 60 seconds ($60.00) to anyone performing a squat a second. No one has raised even once as yet, with the exception of himself.

I would like to see a hydraulic jack used to find the exact center of a loaded platform to be lifted. An athlete can so exhaust himself feeling out the balance, often making so many attempts before mastering the lift that his endurance is taxed before reaching his limit.

I found a leverage machine using a 16” beam (see photo) lifting attachment one foot forward of the anchored end, using either a back lift platform attached with cables, or a harness. Hip lifting can be practiced satisfactorily, the adjustable weight can be two feet in front of one, or 12’ further out. Sets of reps with a ton-and-a-half can be done by the advanced man without undue fatigue.


Question: Have there ever been any men weighing over 400 lbs. with athletic ability?

Answer: Yes, on the Continent, Emile Nauck of Mecklembourg, born 1865, was prominent as a wrestler and recognized at that time as the world’s heaviest athlete, weighing 465 lbs. He died at the early age of 34. Also, August Thibaut, (1890) active in Flanders, France, at lifting and weighing 15 lbs. less than Nauck. He was a much taller man demanding a king-size bed to accommodate his 6’6”. He was employed at as a brewer’s helper and gained fame due to his ability to lift a 465 lb. barrel to his chest. And even more amazing was his claim to one arm dead lift a barrel by grasping the edge of the staves projecting over the top. The size barrel isn’t mentioned but in all probability it is the ½ keg size referred to as it weighed over 200 lbs. Sebastian Miller performed the same feat raising the barrel onto an 8” block grabbing the chine with one hand only. Another monster with an over-abundance of tissue who died in 1933 was Eugene Caoutte, a French-Canadian weighing an unhealthy 460 lbs. Here is a summary of his best lifts. Crucifix – 76 and 76 equals 12 lbs. / Kennedy Lift – 1354 lbs. / One Arm Snatch Right – 173¾ lbs. Left – 173¾ lbs. / One Arm Clean & Jerk – 213 lbs. / Two Arm Press – 245 lbs. / Two Hands Snatch – 231 lbs. / Two Hands Clean & Jerk – 285 lbs. A former Champion Japanese Sumo wrestler towered 7’ tall and weighed 400 lbs., while here in the U.S.A. there are a few wrestlers weighing over 600 lbs. who are active enough to fall on an unwary opponent and smother him into submission.


Question: Do small men excel at strand pulling? Are there championship contests, and will constant use of cables encourage muscular arms?

Answer: Alfred Danks, an Englishman, born 1881, weighing only 126 lbs. at 5’6” was a champion to the title Chest expander Champion of the World, and is sad to have formerly held all world records in the 140 lb. class. His front chest position stretch of 31 ten pull strands equaling 310 lbs. is colossal. Of small bone structure his 14½” upper arm appeared massive. James Evans, a famous Scot also of he British Isles weighing 146 lbs. at 5’3” broke 20 cable-pulling records April 5, 1930 and your search is ended, for thick, shapely upper arms his 15¼” biceps are outstanding. Perhaps a few British strand-pulling records would be of interest: 2 arm front chest pull attention 125 lbs. / same repeated anyhow 185 lbs. / left arm upward push 440 lbs. / 2 arm back lateral raise 125 lbs.

And Belvidere Del Monte, a hercules of Argentina who spent years stretching cables and is a champion in the heavier classes possesses a bulging 17¾” upper arm. Among the oldtimers, Vanderzander, who was most noted, of average height his upper arm development was startling and his strength so great that no other man successfully stretched his expander. Contests in this country are far and few between, probably due to cables being a supplement only to the all around development acquired thru dumbell and barbell training.


Question: A fellow Scandinavian seaman on our ship claims there was a Swedish sailor called the “Swedish Bear” who was the most powerful man of all time.

Answer: Oscar Nygren, born 1899, Norrtelje, Sweden, adopted that name as a strength performer. His general build was a facsimile of Hepburn’s, the world’s current pressing champion. The last heard of Oscar was in 1924. He was exceptionally broad and heavy-boned, massive from head to foot and of smooth musculature. While still a young boy he was a seaman on board a full rigged ship and did a man’s work. Years of following the sea imparted great strength to this son of Vulcan. He could bend horseshoes with his hands and also while holding them clenched in his teeth. The ship’s hawser he broke using a harness was colossal. He bent one inch iron bars with ease and out-pulled a team of horses with his feet braced against a log. In back lifting he hoisted 16 men on a platform, besides claiming to support 10 men on a platform in the wrestler’s bridge position. This last feat was probably a shoulder bridge.