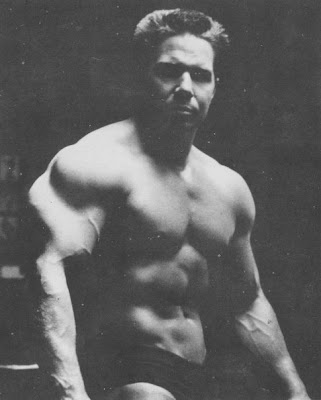 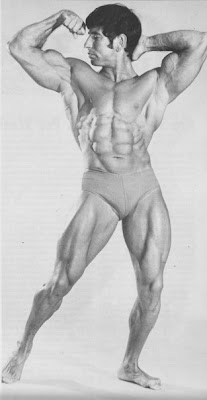 
You know, there are very few guys around today who are really strong, yet at the same time well built. It used to be that bodybuilders and powerlifting devotees were in one and the same flesh. By this I mean that there was a time, not too long ago, when the men who were winning the physique contests were also winning odd lift competitions or at least close to the winning of such contests. I can remember many very strong, very well built en who were of this vintage. How many of you recall the curling contest which included Alan Stephan and Clarence Ross? Both of these men were superbly built and both had fantastic power. If I am not mistaken both Ross and Stephan could curl close to 180 in strict form when in their prime. And both of these men, and also many more like them, were very good in the strict bench press. You see, a while back, if you were not strong it didn’t matter how good you looked; you just weren’t considered great! And don’t kid yourself, the men I just mentioned could give the present crop of muscle building champions a run for their money when they were in their prime. They had muscles which not only looked pleasant to the eye, but their musculatures were also most powerful in appearance and they gave the impression while going through their posing routines that they had muscles which could ‘do things.’ They did not have that cheap, bloated look which so many of our modern greats have. This look comes from overdoses of steroid drugs and overblowing and pumping the muscles with light weights used for many, many sets of many, many reps. This is the reason why so many of our present physique champions look so odd ‘facially.’ What has happened is that they have taken such massive overdoses of tissue drugs that their faces have become puffy; if you look closely at their faces in the physique photos I am sure that you will understand perfectly just what it is that I mean.

And what is the present day bodybuilder to do? Should he take the chance and use these drugs and maybe shorten his life by 10 or 20 years? Should he train just for power and become a ‘power monster’ who could never hope to win a contest of physical beauty? Or should he concentrate on just developing a winning physique even though to do this he must use very light bells and will never own a body that is as strong as it looks? Isn’t power lifting and power training completely different from modern bodybuilding? Is it possible to be bulky yet shapely at the same time without the use of growth drugs? What exactly is the present day physical culture devotee to do?

My answers to these questions revolve around the various training routines of power trainers and bodybuilders, for it is by the combining of both these types of training that the present day lifter has a chance of developing a physique that is not only powerful looking but is also powerful in performance.

Now what if the bodybuilder took a weight that he could not use for more than 5 strict repetitions which he forced himself to perform, maybe 8 with this weight by resting in the finished position after the 5th rep and by using two to three seconds ‘rest pause’ he could force out an additional 3 or 4 strict reps?

Wouldn’t he be developing both strength and muscle at the same time? Wouldn’t he, in effect, be power bodybuilding? And just what kind of body could he hope to develop by using such a training philosophy? Wouldn’t the strictness of these properly executed movements guarantee him of proper muscle development? Wouldn’t the heaviness of the bar itself guarantee him of muscle power? Wouldn’t the continuous forcing cause his muscles to really ‘pump up?’ I will allow the reader to draw his own conclusions, but for myself it would seem this type of training might just very well be a very productive and efficient method. For with this type of training a man would not only become very well built, he would become very strong.

I would like to give you some examples concerning this type of training and would like you to fully understand just what kind of work such a training routine as I am offering you entails. For instance, we all know how hard it is to perform repetition squats with a heavy weight. Can you imagine how hard it would be to do your squats this way?

You take a weight that you can squat with for about 10 repetitions and when you come to the tenth rep you leave the bar on your back and you stand there for a few seconds and take in some very large breaths of air. Then you force out one more squat and then another. You continue this heavy breathing and rest pause until you have completed an additional 6 to 8 squats with this weight. Well, let me tell you brother, when you finish a set of squats in this manner you really feel that you have accomplished something! And can you imagine how strong you would become in your squatting after a few weeks or months on such a routine as this one.

And what about those bench presses? Can you imagine how pumped your chest would be after forcing out 10 reps with a heavy weight that you would normally be able to use for only 5 reps? In a short while you would greatly increase your initial bench press exercising poundage. And you wouldn’t mind that, would you?

The kind of weight training I am outlining for you here and now is one of the most demanding types of physical training anyone can ever hope to utilize. Your heart and lungs will really benefit from all the heavy breathing and your muscles will really gain from all the heavy work. Your power shall surely come up very fast on such a routine due to the fact that this type of training will teach you how to fight for the required sets and reps.

If you decide to follow the routine and philosophy I have outlined here for you, you must of course make sure your diet is more than adequate. Be sure that your protein consumption is enough for you to grow on while on such a demanding schedule as I am about to outline for you. Do not entirely neglect your carbohydrates because they are the prime source of training energy and on such a routine as this, training energy is of the utmost necessity. Make sure that you obtain the proper rest so that you can recuperate completely in between each workout. Try and maintain a tranquil mind. This is very important for the success of any training endeavor. And last, but not least, HAVE CONFIDENCE IN YOURSELF.

And just what can you expect from such a hard, tiring routine? Well, first and foremost you can expect a great increase in your muscle size and power. Also, you will begin to develop that ‘rock hard’ look of lifters who have acquired from one means or another both power and physical beauty. You will be much healthier from such training due to all the forced breathing and you will finally know what it means to take a truly hard workout. You will enable your metabolic processes to reawaken at a before unheard of rate of assimilation and this should enable you to gain in muscular bodyweight. Later on, if you should ever decide to enter a power lifting competition you will not have to be ashamed to enter due to low lifting poundages, and whenever your body in seen you will give the impression of a truly ‘finished’ physique; in short, you will look like a power-bodybuilder!