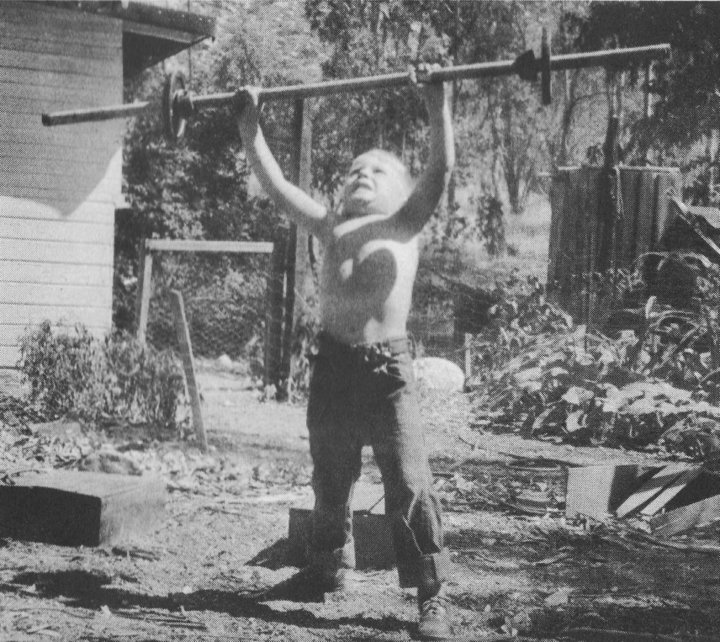 One of the best exercises in the line of weight training movements is the upright rowing motion. It ranks very close in popularity to the continuous pull up and press, the deep knee bend, and the two hands snatch, practiced as a repetition exercise. With a slight variation, using the legs and back and handling more weight, an exercise that is usually called the high pull up, it certainly deserves a place not worse than fourth in value among all the exercises.

The upright rowing motion is exercise No. 7 in Course No. 2 of Bob Hoffman's Simplified System of Barbell Training.

It has long been included in the Advanced York barbell and dumbbell courses as Exercise No. 7 in Course No. 5.

When practiced with a barbell or pair of dumbbells strictly as an upright rowing motion, in which only the arms, shoulders, upper back and chest muscles are employed with no aid from the powerful leg and back muscles, it is a wonderful developer of the entire upper body. The neck receives considerable developmental effect, the trapezius muscles, those large and powerful muscles which extend from a position at neck to the inside of the shoulders, muscles which impart the slope to the strong man's shoulders, are primarily benefited, strengthened and developed. The deltoids, he muscles on the point of the shoulder which make the strong man inches broader, get their full share of work and development.

The regular bentover rowing motion is one of the best to develop and broaden the upper part of the back, and although this upright rowing motion calls more severely on other muscle groups, enough work is still done by the upper back muscles that noticeable development and power will result. You'll easily feel the play of the pectoral or chest muscles, particularly the upper part of this muscle. These muscles of the chest will soon become thicker, more rounded, powerful schwelling-much muscles which will be the envy of other barbell men.


And the arms are made more powerful and much larger. For the man who desires big arms this exercise is essential. The biceps of the arm is benefited, enlarged and strengthened by this movement, but the deep lying muscles of the arm, muscles hard to develop in any other way, the Brachialis Anticus, do much of the work of raising the arms and are quickly developed.

When much heavier weights are employed and the high pull up is practiced, the same muscles as in the upright rowing motion are involved, assisted by the powerful leg and back muscles, one of the very best all around exercises results. This movement is usually practiced as a separate exercise, but some lifters start with a heavy weight in the upright rowing motion and when it becomes too difficult to continue with the arms and shoulders alone, bodily movement utilizing the legs and back become a part of the exercise to complete the desired number of counts (reps).

To perform the upright rowing motion you grasp the bar, knuckles front with the position of the hands that suits you best. As in two hands snatching some prefer as wide a grip as the length of the bar will permit, some like to hold the bar approximately at shoulder width as in the two hands press, but others use a much closer grip. Jake Hitchins always employed this close grip style, placing his hands not over six inches apart. This exercise has long been a favorite of Jake's and has played an important part in developing his more than 50 inch chest and his more than 18 inch arms. The writer of this article also prefers a comparatively close grip and has been enabled to win a number of Saturday afternoon impromptu contests in the York barbell gym with this close grip style.

You can try the various hand positions and see which one suits you. As a development exercise you will be wise to vary your hand position at times as the muscles are brought into action in a diversified manner which develops a larger number of muscles. Great variety of movement, placing as many muscles as possible in action, developing them from every possible angle, develops the greatest strength and the best built muscles.

While good results can be had with this exercise practiced with a barbell alone, even better results can be had when a pair of heavy dumbbells, or the cables and stirrups with the upright rowing motion, are also used. Most bodybuilders are accustomed to performing the exercise with a barbell. The great advantage in using the barbell is the closeness with which the bar can be kept to the body. The width of the grip can be varied although the closer the hands are together, the easier the exercise and the more weight may be handled.

It is more difficult to use dumbbells although many experts believe a better upper arm and shoulder development results due to the fact that the position of the weights (turned in or out) may be altered to suit the individual.

The advantage to using cables with foot stirrups is the increase in resistance the further they are stretched. The effort required to perform upright rows is far greater with cables than with dumbbells, and maximum shoulder and trapezius stimulation can be realized.

Your feet should be placed a comfortable distance apart, the body held erect, the barbell started from a position against the thighs with the arms holding the weight in the style we describe as being "like ropes with hooks on the end." In other words, there is no starting tension on the arms, and as the weight is lowered in each repetition the arms should be fully extended and relaxed. The back is held rigidly straight, the weight drawn up.

There should be no swinging movement, body swaying, jerking or leaning forward and back of the trunk. The upright rowing motion should be performed entirely with the muscles of the arms and the shoulder girdle. Using other movements of the body means that the effort is being distributed and robs the arms, shoulder girdle, upper back and chest of the benefit they should obtain.

Practiced as an exercise, the movement should be done steadily, fairly slowly so that the weight can be felt every inch of the way up and down. You should breathe deeply as the weight rises, exhale completely as the bar reaches the lowest point. Perform from 12 to 15 movements (repetitions) on your usual training day. I write "usual training day" for this movement serves well with the Heavy and Light system.

With this method of training you select a weight which will permit 7 or 8 repetitions, then remove 10 or 20 pounds of the weight and after a short rest perform enough additional repetitions to make a total of 15. I sometimes perform 9 or 10 with a heavy weight, then I repeat the same poundage in a moment, and if I can make 5 or 6 repetitions, an aggregate of 15, I have completed the exercise.

The bar should be drawn high, to a position where it touches the upper chin, below the lower lip. Elbows are spread wide and raised high, so that at the completion of the movement they are as high or higher than the hands. By watching yourself in a mirror you can quickly see the muscles which are involved.

As this is one of the best movements, and because it can be performed with barbell, dumbbells, swingbell, cables and stirrups, some form of it should be a part of every day's training schedule. In fact, it is so excellent a movement that time will be well spent if it is repeated during the training session. Many days I have practiced this movement in five series (sets) of 10 each with a barbell, and when dumbbells were my only training medium I have done as many as 10 x 10 with it. No doubt you men who are advanced have already gathered that this is an excellent movement to build power and proficiency in two hands snatching and two hands cleaning.

I always liked this movement with dumbbells and I believe you will too. I usually pull the dumbbells higher than the chin height mentioned for barbell upright rowing, drawing the hands to about eye level.

If you are one who is so situated that cables are your only training medium, practice a number of sets with heavy resistance and the stirrups in this upright rowing motion. It will develop the muscles which stamp you as a man out of the ordinary. Column-like necks, sloping shoulders, powerfully developed trapezius, broad, rounded, deeply muscled deltoids, heavy upper back muscles, sweeping curve to these muscles, deep rounded pectoral muscles are only found on men who perform special exercises. So practice the upright rowing motion regularly if you wish to have an admiration-creating physique.

In having contests in this exercise you need judges, just as are required in military pressing. As in the military press, jerking too much, swaying or body movement, rising on the toes are all causes for disqualification. A judge or judges should be selected to make a decision as to the correctness of the movement. We haven't been able to inveigle our big champs, Grimek and Stanko, into an upright rowing motion contest, or probably we would find out how hopelessly we ordinary humans are outclassed by the real powerhouses.

I have been the champ of the ordinary or smaller sized York barbell men with recent hoists of 165 in this style. Judging from the fact that 150 is hard enough for me in the pull over on bench, while Steve Stanko with limited training did 310, and 225 is hard enough for me in repetition bent presses while Steve does reps with 300, we probably could expect something fabulous from these super men.

The high pull up, which owing to the greatly increased weight may be practiced as a high dead lift, only pulling the weight to waist height, or with a somewhat lighter weight but still a very heavy one to the height of the nipples, is a very beneficial movement. I usually practice this movement with 145 for 15 repetitions, drawing the weight from near the floor to chin height. This is enough to make you puff, pant and perspire, and that is what is needed to get the best results.

By putting all the muscles into a action, particularly the big muscles of the back and of the legs, which are farthest from the heart, great internal improvement is bound to result. Remember that we wrote that this pull up from floor to chin practiced as a repetition exercise is one of three weight movements made a part of the Royal Canadian Air Force training. The three are continuous pull up and press, deep knee bend, and the pull up to chin with a heavy weight.

To sum up . . . spend more time with the upright rowing motion practiced with barbell, dumbbells, or springs and stirrups. At times use the pull up from floor to chin.