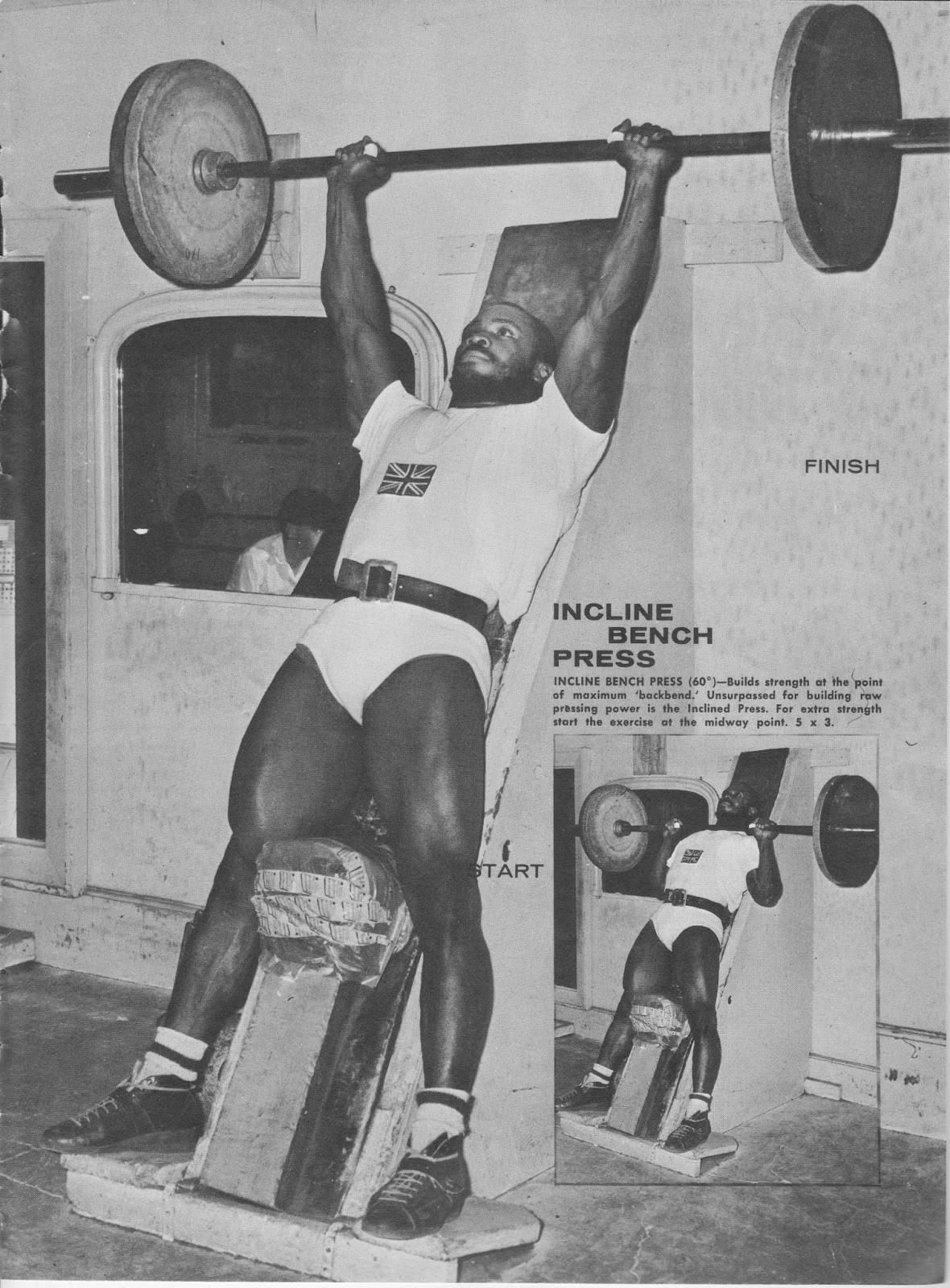 The Forgotten Exercise
by Joe Weider (1971)

Perhaps more than any other one exercise, the Incline Press has helped strength athletes and track and field men develop body-power, muscle density and massiveness. Whether you are a shot-putter, powerlifting, weightlifter or bodybuilder, the movement can work wonders for you.

It is an accepted fact among strength athletes that very few good military pressers display any great talent for incline pressing. In other words, of the three pressing movements, the military press is the least strict. It stands to reason, therefore, that the incline press (or the seated press) would serve admirably if one's intention is to improve the military press. Shot-putters, discus-throwers and javelin-throwers have also benefited from the exercise. And most champion bodybuilders, especially those of shoulder, arm and chest fame, give credit to the incline press for their development. 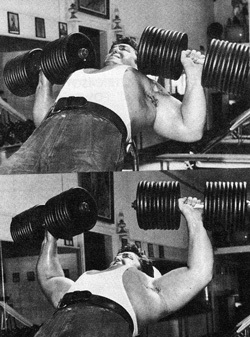 To further make my point, I will cite the case of Pat Casey (photo above). Not only could he incline press over 500 pounds, he was able to bench press 620, before notable witnesses such as Bill West and George Frenn. And here again Pat gives credit to the incline press for his amazing triceps, shoulder and pectoral power.

When George Woods the 1968 silver medalist shot-putter came to the Westside Barbell Club in July of 1967 to train under Bill West, his incline press was just 290 pounds. He experienced trouble bench pressing 400. But by the time he left for Olympic trials at Lake Tahoe in September, 1968 he was able to incline press 430 pounds. And he performed a dead-stop bench press with 485. West and Frenn reported seeing Woods take 440 from the racks and push press it with very little knee dip. Need more proof of the power-building effects of the incline press?

In 1967 George Frenn made an official bench press of 460. He also made two reps on the incline press with 400 pounds.

I draw your attention to these displays of brute power because I believe there is a definite relationship between the incline press, the bench press, and the military press. Since the incline press is stricter than the military press and slightly stricter than the bench press, I suggest you try the lift in your training routine. It has improved the strength, lifting proficiency and muscular development of many a man.  A description of the lift, equipment needed, and a training schedule follows.

The incline pressing which was done at the Westside Barbell Club was usually performed at an angle of from 42 to 45 degrees. Bill West stated that this was desirable so that different muscle groups could be worked with very little deviation from the main groove which was 45 degrees.

A sturdy bench with an adjustable incline should be used for this purpose. The bar should be supported in a power rack or on a set of stands, so that the weight can be lowered to the chest and pressed to arms' length.

However, it is helpful on occasion to start with the bar directly on the chest, as we will explain later.

Make the equipment in such a way that either you will be spotted by a power rack (work inside the power rack and take the weight off of the top pins, making sure you have lower bars to catch the weight if you miss the rep), or have two or three spotters who can assist you, and at times aid you at a specific sticking point if you find a particular attempt difficult.

Until you have learned the groove, start the exercise with the bar at the top. Adjust your grip so that when you lower the bar to your chest the hands and forearms will be in a straight line with the elbows. The bar should be lowered to the chest and rested at a point somewhat higher than the pectorals. This means that the bar should rest on the chest in line with the anterior deltoid muscles in order to take advantage of the greatest amount of leverage. Head and eyes should face straight up. Inhale at the start of the exercise and exhale at its completion.

If you are a beginner in this lift, start with several "touch and go" repetitions. The "dead stops" can come later when you have developed technique with the bar. Don't do bounce-and-go reps because you ruin your groove for the stricter presses and you risk the chance of injury.

You might wrap your elbows for protection and to keep the joints warm.

One final point . . . as the bar is being pressed, keep the elbows back toward your ears. Don't let them drop down near your pectorals because the leverage is much different and the lift will appear to be much harder than it is. You will also learn bad habits which can cause your bench press style to deteriorate.

The training schedule for this lift is much the same as that of the bench press or the military press. Try to complete at least 12 sets of a given number of repetitions. The following schedule will suffice until you create your own based on your individual needs and goals.

This schedule is based around a 300 pound incline press.

If you are inclining more or less than 300 you can adjust the weight accordingly. The routine is based on the fact that for maximum strength to occur, you must handle approximately 90% of maximum in the training schedule. These figures are reported as accurate by both Bill West and George Frenn. The heavy singles seem to be the predisposing factor to the gain in strength. One the 270 for 5 singles has been made with ease it is time to try for a new maximum and then start working with 90% of that.

If you are lifting regularly, that is bench pressing or military pressing, you should only incline once a week. Any more than that would only fatigue you for the incline and other lifts. Do the incline on your day off but go at it with zest and energy. If you bench press on Tuesday and Saturday, do your inclines on Thursday. This will allow ample time for recuperation.

This program worked on all the lifters at the Westside Barbell Club and I am sure it will work for you. Give it a try! 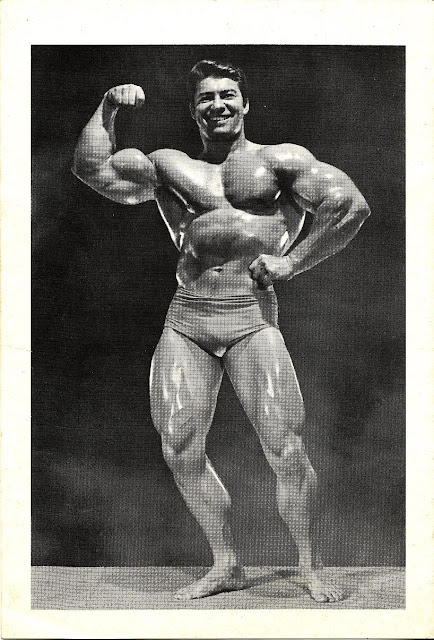 Bodybuilders who wish to gain added muscular definition and shape should incline press with a weight which will allow the performance of 9 to 12 repetitions. Go up to about 6 sets. Press slowly, concentrating on the movement, with almost no pause between sets -- aim for a quick pump. Keep the elbows well back as you descend with the barbell and concentrate strongly on the action.

Bodybuilders who are seeking more power might employ the powerlifter's routine described here once a week. It's a sure way to pack more mass onto you pecs, arms, and shoulders. Don't be afraid to cheat -- bounce the weight off your chest to get it moving up and past the sticking point. Use as much weight as will permit you to perform 3 to 5 reps. Do 5 sets and take your time. Don't rush. Take recuperative pauses for as long as you require when using heavy weights.