Courtesy of Liam Tweed
Many Thanks! 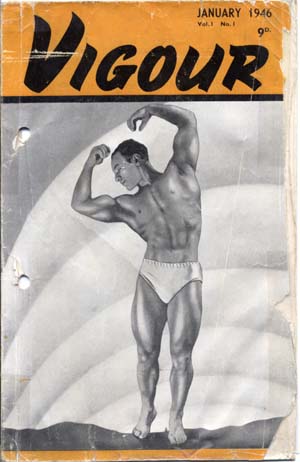 The secret of body-weight and chest-gaining is the ability to eat and rest, and not a flock of magic exercises as you think -- although such are very useful. This means that you must acquire the ability to eat adequate quantities of suitable (for you) food, and must have some comprehension and practice of rest. The proper adjustment of "eat" and "rest" builds up a "surplus of energy" which is changed into bodily growth in order that your ability to eat and rest will be more efficient in the future. There are no other methods by which it is possible to get a large chest and to increase in body-weight.

In case you suspect that this is "expanded chest," you will be interested to know that I have never had an "expanded chest" since it was 49-1/4 ins.; from the time when it stretched the tape to 51 ins. my "expanded chest" has been 3/8 in. LESS than normal chest -- which no one believes except when he measures it. (In my case "expanded chest" [shoulder blades spread] looks bigger yet measures smaller than normal chest). No strong man with a really large chest has any "expansion"'; only those with small chests, regardless of what the tape says, will have "expansion." At this time my reach was 6 ft. 1/2 in., height 5 ft. 10-3/8 ins., and body-weight 20 st. 12 lbs., proving no doubt that I was clumsy, since the more I weigh the farther I can jump! At present I keep my chest around 53 ins. and weight about 17 st. in order to get within buyable clothes.

There are no doubt limits to physical size and strength, but I have never found them, and those who have are just unable to master "eating and resting." Many of our great Yankee Trainers who are the Bellwethers of their clubs are not especially outstanding in size and strength; this is not because of ignorance, but because a club "pusher" leads a "setting hen" life -- and as you country cousins are aware,"setting hens" always lose weight.

Eskimos have short digestive systems (which type Barrs assures me is much more common in Britain than in Yankee-land) -- emulating fish, not scientifically, because they eat so many of them, but because they have lived for so many generations on meat diets. This English-Eskimo gizzard is very hard to make gain, I am told; why this type is so common I do not know, being more informed on our Yankee forms of honesty than English social customs since Shakespeare. I believe my Irish friends who have lived in England; they tell me that the English eat just like canaries -- but they do not twitter. (Maybe the female English do!). In Village England the natives were known far and wide as "Beef Eaters," and it may be that the English, like the Eskimos, gradually developed meat eaters' internals! In modern times they have been forced by economic circumstances or popular fashion "to be just like a canary -- with no twitter." We Yankees are super-men everywhere but in the eyes of European art critics, and Dr. Ernest Hooton, Harvard anthropologist, points out that the noted "American Medical Association Man" is rapidly getting worse, while all the Proletarian anthropologists swear he is getting better. This "Fishbein" Man is getting taller and much, much thinner through the pin bones. This bird is the popular proletarian hero type, but, like Hooten, I sez he is a very poor MAN type. This degeneracy is extremely common in all our Yankee stock, including the children of new immigrants. It is my suspicion that if British hard-to-gainers were dumped off into Eskimo land -- with good clothes-pins to fit their noses -- and with a plentiful supply of reindeer, walrus meat, seal meat and the delicacy of creamed fish several months old with the bones dissolved in the cream, our loyal Britons would gain many stones before springtime. (No canary-feed up there.)

I am a standard omnivorous-diet type and unable to do vigorous exercises without meat. Before then I usually lived as a vegetarian, for economic not sentimental reasons, which delayed the Strong Man Boom for about 10 years; in those days my mechanical conditions were right, but my grub was not.

Then there are genuine vegetarians who can do the most ferocious exercises on eating "hay." Most of them lament this as they are aware that meat eaters should be superior, even though it does not seem so in their case. Most small strong men are as carnivorous and "modest" in appetite as shrews, whose appetite for meat, like the Eskimos, is terrific to behold. The Cult of Vegetarianism is a dominant disease of a dying culture, such as our time. It flourishes with the coming of the Second Religiousness to which is due the present ossification of India and China and which will come to us in a century or so. Vegetarians are the Future Modernists -- from which Lord deliver us.

Anyone who practices vegetarianism for Virtue's Sake is a sentimental slaphap. Anyone who advocates it (if he believes it), is just a forerunner of the Second Religiousness, which is the final proof of ruin of the European kind of man. Sometimes the advocator does not believe it -- such as one notorious Vegetarian Prophet in Yankeeland who did it for publicity to increase magazine circulation, and to attract the credulous cuckooos and lily lovers (fond of onions, myself) for monetary reasons. Many of his "followers" shed their teeth at a premature age in this devotion to "refusing to live on murdered innocent animal life."

One of my friends, who donated his teeth to Virtue and later had to go back to living on innocent murdered animal life (being selfish enough to want to live), later came to know the ex-Vegetarian Prophet quite well and found that during his great Vegetarian Crusade he lived almost exclusively on many pounds (not milligrams) of beefsteak per day.No doubt the Virtue Lovers will be annoyed at such Hypocrites in the Vegetarian Heaven and will believe that Justice will Prevail. This is no doubt true, because he is very famous, very rich, many times a father and, what is more astounding, he is around four score years old and never got beyond his first childhood -- proving most emphatically that he is no vegetarian!

If you are not born a vegetarian, make no attempt to become one; it will derange your judgement, stupefy your mind and make it impossible to gain weight and become stronger. Cows may have many spare stomachs to be able to live on vegetation if that is the best they can get. Wise dairymen feed hog tankage to cows, and our Guernsey cow after a few days whipped all of our hogs and commenced to feast on delicious cooked horsemeat from the rendering plant. She was exceedingly found of this -- in spite of the fact that it had an odoriferous range of 5,000 yards. Cows have lots of spare entrails to preserve them when unfortunate enough to live among Hindus, but much prefer delicious desserts seasoned with animal proteins. Short-intestined British must likewise have more protein.

In the next installment Joe Hise talks about breathing and sums up the art of physique building.