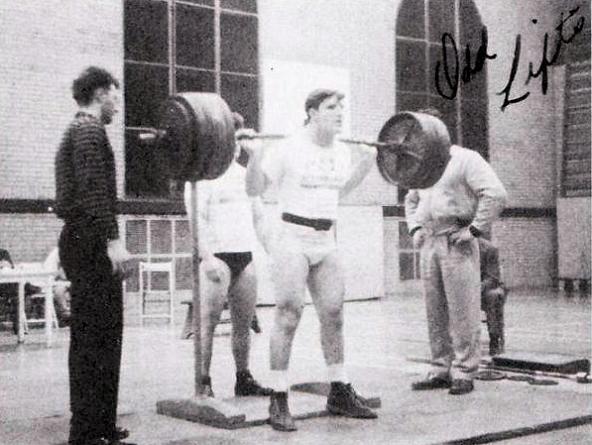 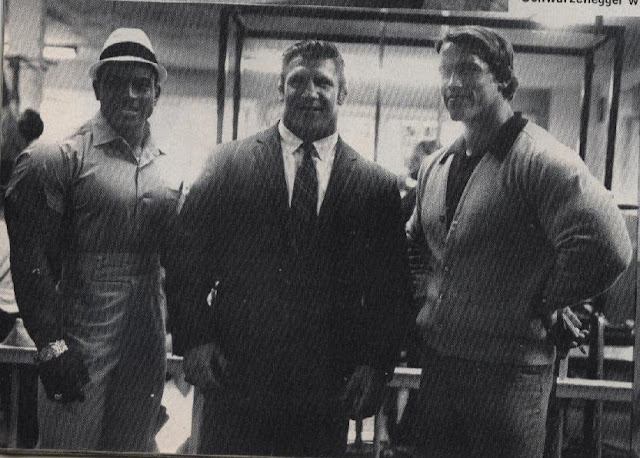 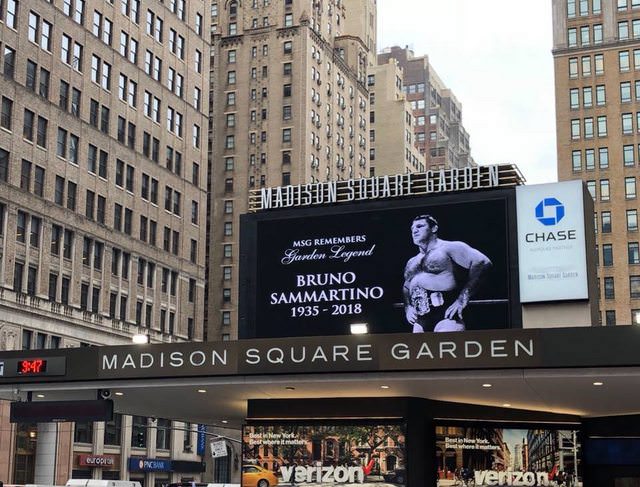 Question: First of all, Bruno, have you always been rugged and powerful?

Answer: Far from it! My family, living in Italy during World War 2, suffered greatly. I was a victim of malnutrition, and even after we moved to this country I continued to be sickly and run down. I used to make weekly trips to the doctor for vitamins, tonics, etc.

Q: How did you get started in weight training?

A: Well, I had a friend who was a very good weight lifter. He got me interested, even though at the time I weighed only 105 pounds, and I started lifting at the East Liberty YMCA in Pittsburgh. I was 16 at the time.

I really enjoyed weight training and soon started entering Olympic lifting and power lifting contests. The first time I competed was in the 123-pound class.

Q: Tell us how you developed your training routines.

A: Well, mostly from reading the various muscle magazines on the market. I tried and discarded exercises I feel wouldn't help me in my quest for power and size. I feel you have to set up a routine that suits you personally and what you want from your weight training, not follow every new exercise or routine that comes out.

Q: Tell us about your training . . . what do you do for a routine now? 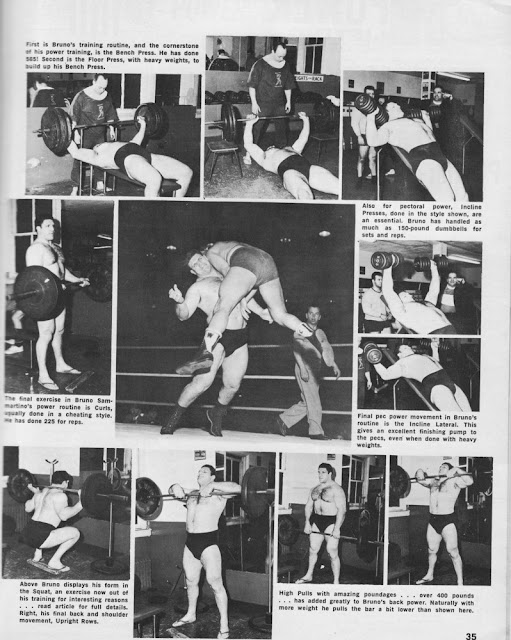 A: Well, you realize that as the World Wrestling Champion I'm on the go constantly, traveling to and from my wrestling engagements. As a matter of fact, later this month I'm going for a two month tour of Europe and Australia, including a visit to my old home in Italy, and a private audience with the Pope.

Training under these conditions is erratic, so I keep a routine of three basic exercises -- Bench Press, Curls, and Standing Laterals. I use bench presses as the cornerstone of my training, doing 10-12 sets. I start around 300, and work up doing sets of 3-5 reps, then a single with maximum poundage.

My recent best was a single rep with 500 pounds, at Mid-City Health Club, where I always train when I'm in New York City. Then I finish off with an endurance set . . . I did 33 reps with 330 in the same workout as the 500 single . . . as I find this type of training helps my wrestling. Then I just do some Curls and Laterals to keep my arms and shoulders in the pink.

Q: This isn't the routine you used for developing all your power, of course.

A: True. I have a set power training routine I used before I got into wrestling, and I pretty well follow the same routine now whenever I get a chance to train more extensively than the routine I just mentioned.

First in that routine is bench presses. I usually do 10 sets, working up in 2-rep jumps to my maximum. then I'll do an endurance set for pump, as I previously mentioned.

Next is the floor press. This version is a bench press done off boxes, while I'm lying on the floor. (See exercise photos above). Because of the limited motion I handle more weight, usually about 550, for 5-7 sets of 3 reps. I keep as good form as possible, for in the bench press I do not believe in arching. I tend to bound the bar off my chest, but I don't recommend this procedure to others, for it's easy to a beginner to hurt himself doing this.

Third in my training routine is incline dumbbell presses. I do 5 sets of 5 with heavy dumbbells. At the time I was training with the amazing Karl Norberg in San Francisco I was using 150-pound dumbbells.

Next is incline laterals, another 5 sets of 5, with 125-pound dumbbells. This finishes off my chest power work.

For my fifth exercise I go on the upright rows done in a cheating style, so I can handle extra weight. I do 6 sets of 6-7 reps with 205 pounds.

For added back and shoulder power, I next do high pulls. Again I use a cheating style, and really don't pull the weight that high, just up to waist level or a bit higher. I use 400-425 pounds, so that explains why I do 6 sets of 3-4 reps.

You'll note that I said "was" in my routine. I've given up squats since I began to wrestle with regularity, for I found squats to be the worst exercise for wrestling. They would affect my knees, so I would occasionally make a swift move in the ring, only to find my knee buckling under me. Since I've given them up I've found I have no more of this sort of trouble. I do freehand squats now to warm up before my matches, and find them to be perfect.

Q: That's quite a routine, Bruno. You mentioned training with Karl Norberg . . . tell us about this amazing oldster.

A: I think 74-year old Karl is a truly amazing physical specimen. He is as enthusiastic about power training as I am, and at one time several years ago I found myself in San Francisco for three months, wrestling only one or two nights a week. Karl and I trained together over that time, and I did my best bench press ever, 565 pounds. The late Ray Van Cleef witnessed it, by the way. I followed the power routine I just outlined, with the exception of squats, and Karl kept right with me all the way. He's a great inspiration and really deserves credit for his power and zest.

!: Speaking of your wrestling and power training, how does one affect the other?

A: Not at all. That is, I wrestle regularly and I train regularly as I can, and I feel the energy and effort expended on each doesn't affect the other. The strength you need for wrestling is a different type of strength than what you need for power training, different in the fact that it is more timing, coordination and balance.

Of the types of weight training, I would say Olympic lifting would be the best training for wrestling, for the coordination and timing involved, especially in the Snatch, and Clean and Jerk, will help you more. As I sad, wrestling demands a different kind of power than weight training. For this reason many powerful men, such as Paul Anderson, are failures in the ring.

Q: What were your bests in Olympic lifting?

You see, I cannot lock my elbows . . . I believe this was caused by wartime malnutrition . . . so in the Snatch I would be called for pressing the weight out all the time, and in the Jerk I had to do a sort of push jerk to get the weight to a point where my elbows could hold it. Because of these elbow problems I gravitated more towards power training than Olympic lifting.

Q: Could you explain more about your remark about Anderson? That sounded interesting.

A: Yes, Paul was actually a very poor wrestler. I wrestled against him in Atlanta, and after five minutes he was completely exhausted. His weight training had only been for short bursts with the weights, and he had neither endurance nor the quick coordination and balance for wrestling. I think the endurance work, the high reps with heavy weight, helps me more than anything else with the wrestling.

Q: Who would you consider the most powerful person you've met?

A: In the wrestling world, I'd say Gorilla Monsoon. Here's a man who was 6 feet 8 inches tall and weighed 392 on the scales, yet is as quick and agile as any man. When it comes to getting around the ring and applying force, he's the best. For weight lifting power, I'd say the Baillargeon brothers of Canada are the best I've seen. (Note: It's worth doing some digging to find just how "weight lifting strong" these brothers were!).

Q: What are your best power lifts?

Q: Do you think you could have done more if you hadn't gone into wrestling?

A: Yes, probably. I haven't been able to follow my power program too much over the past seven years, due to the demands of traveling for my wrestling career. The 545 bench press was done 7-8 years ago, and I think I would have hit the 600-pound mark by now if I'd kept it up. I was undefeated in my prime in the four power lifts (Note: Curl, eh), and although I certainly couldn't say I would have remained that way if I'd kept it up, I'm sure the competition would have spurred me on to better lifts.

Q: What have your gains been from your weight training?

!: Do you have any training peculiarities?

A: Well, I would say the only one is that I like to train in a very hot and humid place. Between my elbow problems and the constant wrestling, I need a thorough warmup before doing things, and with it warm and humid I really feel my best for heavy training.

Q: Do you have any other comments you'd like to make?

A: Yes, I'd like to commend my training partner in New York City, Tom Minichiello, on his excellent gym and the courtesy and service he shows his customers.

Finally, I'd like to personally thank all my fans from both the wrestling and weight training world, who've been so nice to me over the years. I owe them a debt of gratitude I'll never be able to repay.