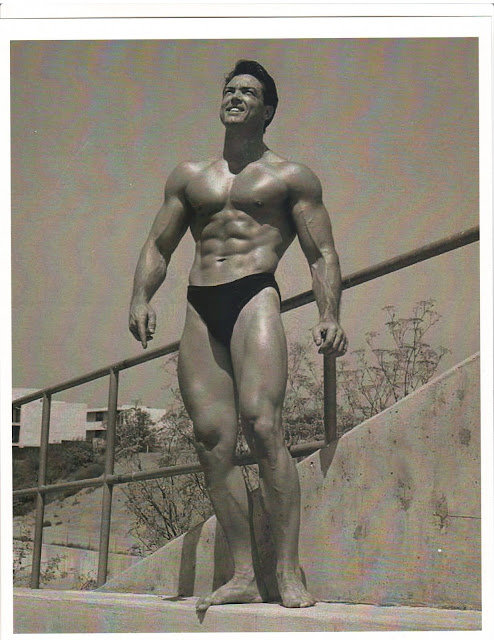 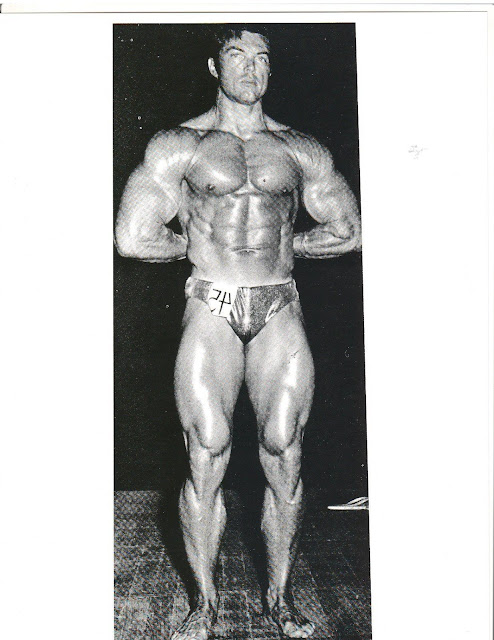 There was a moment of complete silence. I had stopped talking for a change. All that could be heard was the sound of the water in the pool gently lapping  at the sides and the music coming from the speaker system. It was one of those kinds of days. The type that makes you want to do hundreds of "reps" of stares into space and thousands of "sets" of lying down beside a pool in the summer sun.

Luckily I had been invited to go swimming in Don Peters' pool. He had just purchased a beautiful home in he San Fernando Valley and had turned two of its rooms into a home, I mean home gym. It was filled with the best in heavy duty equipment and its convenience to training when you needed to and swimming when you wanted to made the whole bit pretty fantastic.

Don, himself, was doing even less than I was. At least I adjusted my sunglasses every once in a while. Don just looked like a dead man floating on a rubber raft in the middle of the pool. I don't know how much time he spent this way but it seemed like hours. I was startled when Don's wife called from the house.

"Thanks," I called back.

"You hear that don?" There was no answer. "Don?" He just kept floating silently on the waves of dreamland, blanketed by the golden California sun. I dipped my hand in the pool and shot some water on him.

He laughed. "I just wanted to show that I'm loyal to bodybuilding even in my dreams. He reached for the can of protein but saw that he had knocked it into the water where it was floating like he was.

"Lucky it was empty. Say, when is the show going to be on?" he asked.

"That's why I woke you old friend. Dee just said that it'll begin in a few minutes."

True to his word, he took quite some time to get out of the pool. We went into the living room.

"Later maybe but right now I want to see the Reeves film. The movie was called "White Warrior" and it starred Steve Reeves in the best muscular shape. 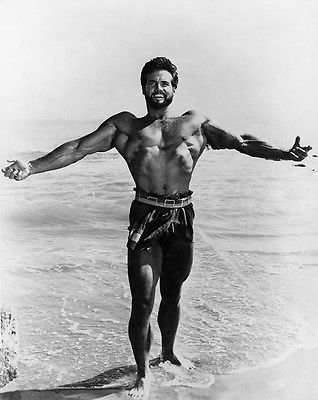 Steve Reeves in The White Warrior

With Don's color TV set, we planned to have an even more enjoyable time. All that was missing was the peanuts and the popcorn. The film was great. Reeves was big -- real big. In fact he must have been at his greatest bodyweight. It was old-fashioned muscle for the sake of muscle. "Wow," said Don, who was wide awake by now. "Will you look at those arms!"

While I had never thought of Reeves as being extraordinary in the arm department, this time he looked like he had tree trunks strapped to his shoulders.

At one point in the picture he bolts down a hallway in trousers that had torn pant legs. Unbelievable is the only word for the legs that Reeves had. I looked over at Don who was shaking his head in wonder. "That," he said, "is the best pair of legs ever developed by a bodybuilder." I didn't argue. 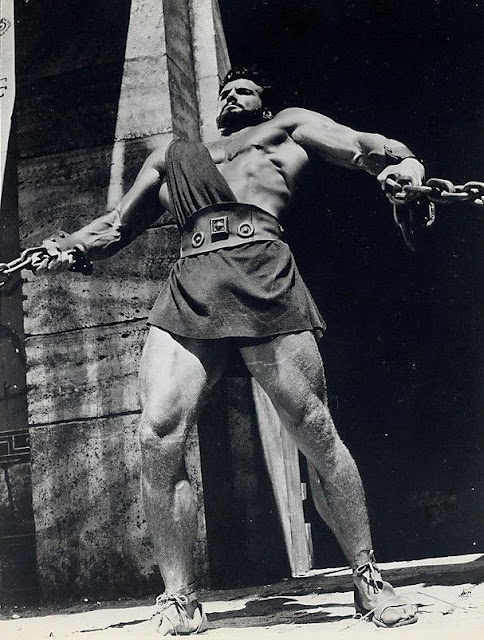 After the film we discussed what we had just seen.

"He must have been born that way," said Don.

"Well," I replied, "we both know that that isn't so. We've all seen pictures of him when he was a kid and he looked completely normal."

"Yeah," said Don, "but he did a lot of bike riding in his formative years which it's said laid the foundation for what he built later."

As we continued our discussion we both agreed on one basic premise. All bodybuilders can have good legs if they start soon enough and are willing to stick with it.

"Look at me," said Don. "I was a tall skinny kid as I was growing up. No one would ever have thought that I would have had any muscle much less a good leg development. I suppose you might say that I laid my foundation with sports such as football and basketball as a youngster. After I started with bodybuilding I found that my legs were one of the easiest parts of my physique to develop."

"What's your present program?" I asked.

"I'll show you," he answered as he got up from the chair and went into the gym.

"You're going to train now?"

"I feel like it. After watching Reeves I feel the need."

I knew what he meant. "Is this your leg day?" I asked.

"Well, I work calves every day and find I get better results. I remember Reg Park saying that he felt that large calves gave a more dramatic balance to the leg, if you had to choose between thighs and calves. On top of that it takes more work to reach those denser muscle fibers of the calves."

1) Squat -
with the bar on his shoulders and his heels on a block, Don squatted for 1 set of 8 reps. Resting just long enough to add weight, Don then squatted for another set of 6, and then more weight added for 4. Don reduced the weight and did a set of 6. The final set of 8 reps was with the original weight. Six sets of squats, focusing on isolating the quadriceps.

3) Donkey Calf Raise -
Next Don went to calf training, which he does every day. With me on his back for the extra weight needed, he bent at the waist and placed his toes on a high block to get a fuller extension. He did 10 reps with his toes in, then 10 with toes pointing out, then 10 with toes straight ahead. 5 sets of 30 reps, varying the toe placement every 10 reps.

"No wonder you've got such great legs!" I said after he finished. "As long as you keep up a program like that."

"That I train instinctively. When I feel inside that the outside won't the way it should, I change the program."

As I left for home I began to realize why some day Don Peters would be a champion. As for me, instinctive feelings told me I would starve to death if I didn't get home soon.